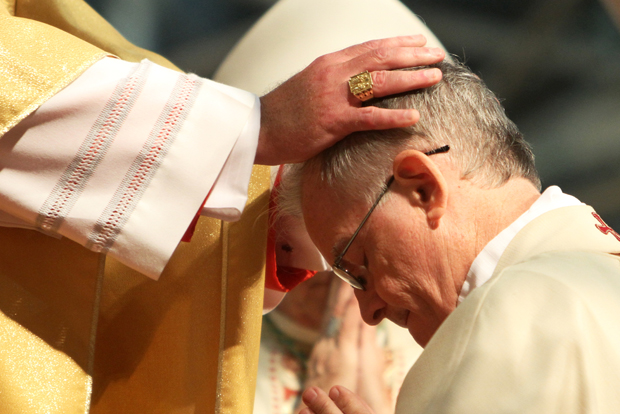 VATICAN CITY (CNS) — Although the number is not high, it is no longer “exceptional” to have priests turn down an appointment as bishop, said Canadian Cardinal Marc Ouellet, prefect of the Congregation for Bishops.

Speaking Feb. 1 about the annual course his office sponsors for new bishops, the cardinal was asked about rumors that more and more priests are saying they do not want to be a bishop and declining an appointment even when the pope, on the recommendation of Cardinal Ouellet’s office, has chosen them.

“Yes, that’s true. Nowadays you have people who do not accept the appointment,” he said, adding that he would not provide statistics on how often it happens, although he insisted the number was not huge.

Priests decline for a variety of reasons, Cardinal Ouellet said, pointing to the example of a priest who was chosen, but then informed the congregation that he had cancer and had not told others of his illness. “It was a sign of responsibility not to accept the appointment,” he said.

Others decline because of something in their past or because they think they cannot handle the responsibility, he said. In the latter case, he said, “normally we insist” because often people are not the best judges of their own abilities. But when a person makes “a decision in conscience,” the Vatican respects that.

As for the type of priests Pope Francis and the congregation are looking for as candidates, Cardinal Ouellet said the pope “has insisted on the pastoral quality of the bishops. That’s very clear. It does not mean that they do not have to be masters of the faith because a bishop is, first and foremost, the first teacher of the faith in his diocese.”

“But the capacity to relate to people, to establish dialogue, to start from the point where people are — this is a quality that is also requested,” the cardinal said.

Pope Francis’ “charism is to be very compassionate, very close to people, but at the same time, he knows where he leads people: to our Lord Jesus Christ,” he said.

Cardinal Ouellet also confirmed that since at least 2010, the confidential questionnaire sent to local bishops and priests asking about a potential candidate for bishop includes a question about whether the potential candidate ever was in a position of having to handle an accusation of clerical sexual abuse made against another priest or church worker.

“We have to be able to verify that he is able to handle these cases well, that is to say, he does not have a mentality of covering them up or not reporting them or not taking them seriously,” the cardinal said. As far as possible, the Vatican wants to know a potential bishop will take accusations seriously and deal with them appropriately.

Since 2001, all newly ordained bishops serving in dioceses that report to the Congregation for Bishops have been obliged to come to Rome in September for an eight- or nine-day course for new bishops. More recently, the Congregation for Eastern Churches has co-sponsored the course and brought new Eastern-rite bishops to Rome for it. Every two years, new bishops in mission territories have a similar course sponsored by the Congregation for the Evangelization of Peoples with some of the sessions overlapping.

The speeches, homilies and reflections from the September 2015 course were published recently in a book, “Witnesses of the Risen One.” Cardinal Ouellet said he hoped publishing the papers would help bishops in their ministry as well as elicit suggestions for improving the course.

More than 1,500 bishops have participated in the past 14 years, he said. While it includes sessions on finances, rapport with one’s priests and on preventing clerical sexual abuse, most participants say the most valuable part of the course was the opportunity to meet, discuss and pray with bishops from around the world.

“The goal of these meetings is to learn their new identity — that they belong to the college of the successors of the apostles,” Cardinal Ouellet said. “It’s an extraordinary moment of conversion for them.”

“A priest who is ordained a bishop comes to Rome to learn that from now on he has a universal responsibility as a member of this college,” the cardinal said.

The new bishops, he said, also are excited to meet the pope who appointed them.

“Every pope has his gifts and this influences the way younger bishops act,” Cardinal Ouellet said. “One identifies with the style” of the pope who nominated him and often tries to make choices he thinks the pope would make in ministry, lifestyle and — especially with Pope Francis — in ways of communicating; “he breaches boundaries in proclaiming the Gospel,” the cardinal said.