Turning a tragic ‘Why me?’ into ‘What can I learn from this?’ 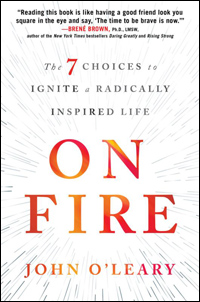 The idea of being burned on 100 percent of one’s body defies the imagination, let alone survival. But some 30 years ago, 9-year-old John O’Leary experienced just that — 87 percent were third-degree burns — and lived. He emerged from his ordeal with a passion to live fully and to inspire others to do the same.

He communicates this message to thousands annually as a motivational speaker, and now he has distilled it into this short book.

John was a boy playing with a five-gallon gasoline can and some matches when he sustained life-threatening burns that landed him in a hospital for months. The only part of his body that could provide skin for the extensive grafts he needed was his scalp. His fingers were so badly burned that they eventually had to be amputated and he suffered from painful scar tissue that roped much of his body.

But he was blessed to have parents and three siblings who supported him from the start. He recounts that right away in the hospital, his mother asked: “John, do you want to die?” When he replied that he wanted to live, she said, “Then, John, you need to fight like you’ve never fought before. You need to take the hand of God, and you need to walk this journey with him. Race forward with everything you have. Daddy and I will be with you every step of the way. But John, you listen to me: You need to fight for it.”

What seems to have compelled the youngster and then adult to live a truly joyful, heartfelt life after such a tragedy is a strong faith in God.

His parents, Susan and Denny, raised him to believe in the power of prayer. O’Leary acknowledges that “there were thousands of prayers offered up for me that night, and every day for the next five months that I spent in the hospital.” Yet he does not hold that prayer actually changes God; rather, it works “to change and inspire the next steps of the individuals offering the prayer.”

O’Leary, a married father of four, summarizes his philosophy in seven transformative “choices” that the individual can make, in daily life: choosing accountability, self-acceptance, purpose, to be a victor, growth, significance and love. First, though, one must be “fully awake, living wholeheartedly in every single moment.”

When we manage to do this, we realize that of the two great motivators, fear and love, only love is sustaining.

In O’Leary’s words, “love affects everything.” He has never forgotten how the warmth of his family’s love enveloped him for the five long months he spent recuperating in the hospital and gave him the courage to struggle to live. As he explains, while “we can’t always choose the path we walk in life,” love — both human and divine — can help us “choose the manner in which we walk it.”

Another key idea is the importance of cultivating a sense of gratitude for one’s blessings, however small they may seem. This leads to a positive outlook, whereby one emerges not as a victim but as a victor in facing life’s daily challenges.

O’Leary suggests turning on its head the typical question that the victim asks: “Why me?” into “What can I learn from this experience?” Asking the question this way leads to a transformed viewpoint that can propel one out of the deepest mire of victimhood.

Yet this is more than the familiar “power of positive thinking” advice. In one of the most interesting chapters, O’Leary cites the famous University of Minnesota “nun study” of 1986 that connected longevity with a positive outlook. When researchers studied the journals and lives of a group of 180 Sisters of Notre Dame in Milwaukee, they found that “a stunning 90 percent of the nuns whose statements were most cheerful were still alive at age 85.”

What was considered a “positive” statement? O’Leary explains that a journal entry such as “The food here stinks” was judged as negative, while “Grateful for another night of beans and rice!” was counted as positive. Ten years later, the researchers found that 54 percent of the nuns evaluated as most cheerful were still living at age 94. Their positive outlook made a huge difference, even when other factors such as their level of physical activity were considered.

This sort of background information gives the book a sprightly pace. Written in a conversational style, “On Fire” is accessible to a diverse audience whose common denominator is faith in God and willingness to strive for a more meaningful life.

Roberts teaches journalism at the State University of New York at Albany and has written two books about Dorothy Day and the Catholic Worker.

NEXT: ‘Risen’: An unusually effective drama on Christianity’s origin