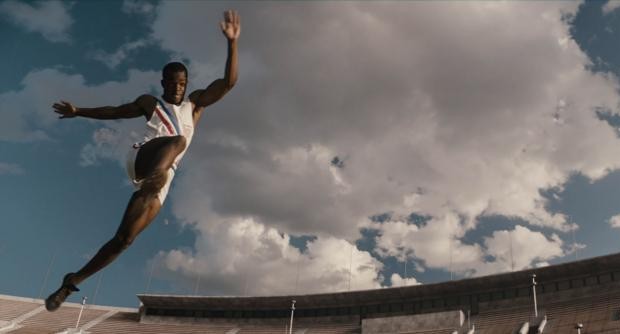 Stephan James stars in a scene from the movie "Race." (CNS photo/Focus Features)

Eighty years have passed since Owens, an African-American, won four gold medals at the 1936 Olympic Games in Berlin, single-handedly dealing a devastating blow to Nazism and its belief in Aryan supremacy.

Director Stephen Hopkins deftly explores the double meaning of the film’s title, chronicling Owens’ personal struggle against racism and bigotry while celebrating his astounding athletic achievements. What emerges is a valuable history lesson for adolescents as well as their parents, and an inspiring portrait of personal courage, determination, friendship and tolerance.

The film opens in 1933, with Owens’ arrival at Ohio State University. A natural athlete, he is unstoppable on the track and a record-breaker, much to the amazement of his coach, Larry Snyder (Jason Sudeikis). Snyder immediately proposes to train Owens for the 1936 Games.

In the meantime, the U.S. Olympic Committee is divided over whether to attend the event. The committee president, Jeremiah Mahoney (William Hurt), wants the athletes to stay home to protest against the oppressive regime of Adolf Hitler (Adrian Zwicker), glorified in propaganda films directed by Leni Riefenstahl (Carice van Houten).

Mahoney is opposed by Avery Brundage (Jeremy Irons), a real estate tycoon and former Olympic athlete. He agrees to fly to Berlin to meet wicked Nazi propagandist Joseph Goebbels (Barnaby Metschurat), who envisions the Olympics as an opportunity to legitimize Nazism on the world stage. Brundage strikes a dubious deal with the devil, and Goebbels agrees to allow Jewish and black athletes to compete.

Boycott averted, Owens trains in earnest. As his fame grows, so does the pressure to be a role model for African-Americans (as baseball’s Jackie Robinson would experience, a decade later). He also pines for his fiancee back home, Ruth (Shanice Banton), who cares for their baby daughter.

Running offers a respite from segregation. “Out there ain’t no black and white, there’s only fast and slow,” Owens says. “Nothing matters — not color, not money — not even hate. For those 10 seconds, you are completely free.”

“Race” re-creates the 1936 Games in meticulous detail, capturing Owens’ wonder at the spectacle and his surprise by the non-segregated athletes’ village, where he is treated with respect.

It also portrays his unexpected friendship with a German athlete, Carl “Luz” Long (David Kross), his chief rival in the long jump. Long defied Hitler and Goebbels by congratulating Owens on his gold medal and joining him for a victory lap around the stadium. They remained friends long after the Games ended.

The film contains adult themes, an out-of-wedlock pregnancy, and occasional crude and profane language. The Catholic News Service classification is A-II — adults and adolescents. The Motion Picture Association of America rating is PG-13 — parents strongly cautioned. Some material may be inappropriate for children under 13.

PREVIOUS: Vengeful anti-hero of ‘Deadpool’ no more than a punk, with wit

NEXT: Turning a tragic ‘Why me?’ into ‘What can I learn from this?’