‘Hail, Caesar!,’ and farewell to a bygone era 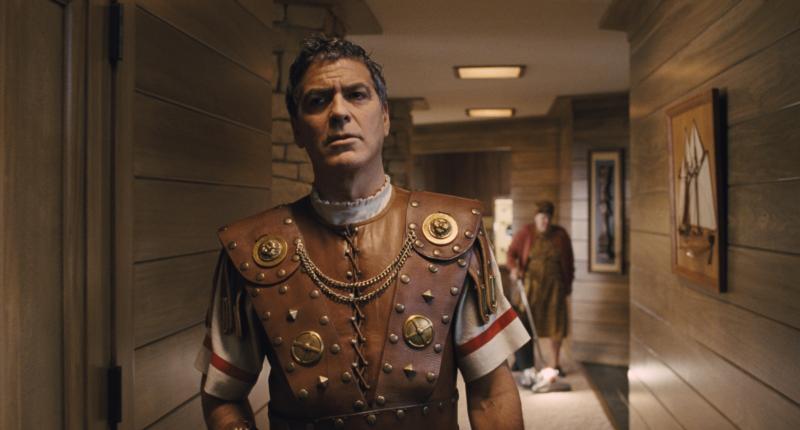 George Clooney stars in a scene from the movie "Hail, Caesar!" (CNS photo/Universal)

That’s because this loving sendup of golden-age Hollywood represents nothing short of a supersized valentine presented by the sibling collaborators to the Tinseltown of bygone days, specifically the early 1950s.

Indeed, the film’s rather perfunctory plot is merely an excuse to revel in the industry’s familiar yet, in cultural terms, strangely far-removed past.

So it hardly matters to the audience, nor is it meant to, when MGM stand-in Capitol Pictures’ major star, Baird Whitlock (George Clooney) is kidnapped. But it means a great deal to conscientious studio executive — and behind-the-scenes fixer — Eddie Mannix (Josh Brolin), who undertakes to retrieve Baird without creating unwanted headlines.

Like his daily roaming of the back lot, during which he’s trailed by his devoted secretary, C.C. Calhoun (Frances McDormand), Eddie’s discreet efforts to resolve Baird’s disappearance introduce us to a parade of recognizable figures.

The last two are, of course, meant to recall muck mavens Hedda Hopper and Louella Parsons. Among the stories Eddie strives to keep Thora and Thessaly from uncovering are DeeAnna’s out-of-wedlock pregnancy and Laurence’s closeted proclivities.

An obvious, though unspoken, gay subtext is on full display, however, as Burt and some extras film a musical number that matches the naval costumes of “On the Town” with lyrics paralleling the sentiments of “There Is Nothing Like a Dame” from “South Pacific.” The scene jokingly suggests that there may be an alternative after all.

Besides such exclusively adult fare, the movie’s satiric treatment of religion further restricts its suitable audience. Eddie is shown to be an absurdly scrupulous Catholic who measures the time since his last confession in hours rather than weeks or months. When abducted, moreover, Baird is playing the part of a Roman officer in the biblical epic of the title, a feature strongly resembling the 1959 version of “Ben-Hur.”

The sensitive subject matter of the fictional “Hail, Caesar!” requires that Eddie get clearance from the head of the National Legion of Decency — long-ago precursor of Catholic News Service’s Media Review Office. This leads to a meeting with an array of clergymen, the Legion’s priestly chief among them.

Besides squabbling between the lone rabbi and the representatives of Christianity over the divine status of “the Nazarene,” this powwow also sees the believers in Christ getting drawn into the logical quicksand that surrounds the mystical dogma of the Trinity — with muddled and supposedly humorous results.

In assessing such material, mature viewers will need to discern whether, in their judgment, faith itself is being ridiculed or merely the cheapening of sacred beliefs at the hands of crude moviemakers and misguided devotees. For those drawing the former conclusion, of course, “Hail, Caesar!” will qualify as offensive.

The film contains a complex treatment of religious themes, including some irreverent humor, comic references to homosexuality, as well as a couple of uses of profanity and of crass language. The Catholic News Service classification is L — limited adult audience, films whose problematic content many adults would find troubling. The Motion Picture Association of America rating is PG-13 — parents strongly cautioned. Some material may be inappropriate for children under 13.

PREVIOUS: Jane Austen would spin in her grave over ‘Pride and Prejudice and Zombies’