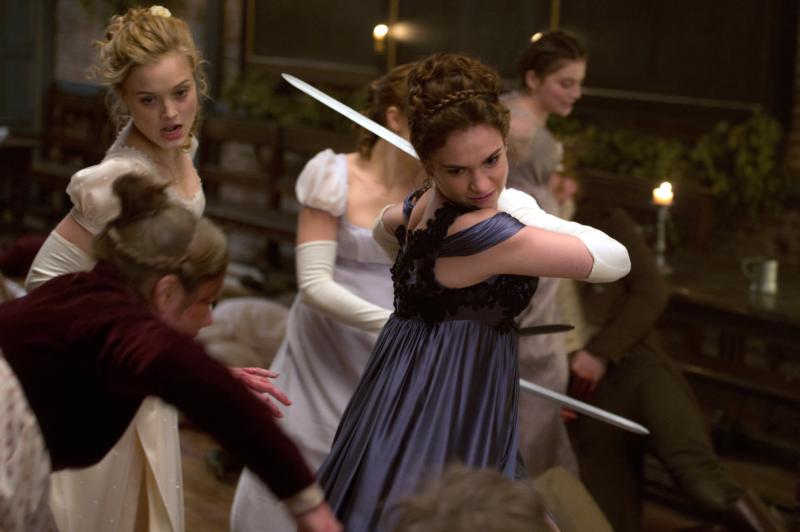 Lily James and Bella Heathcote star in a scene from the movie "Pride and Prejudice and Zombies." (CNS photo/Screen Gems)

NEW YORK (CNS) — That rustling sound you hear is Jane Austen and her crinolines. They’re spinning in the grave they share over a transgression called “Pride and Prejudice and Zombies” (Screen Gems).

As its title suggests, this comedy-drama is “Downton Abbey” meets “The Walking Dead.” The result is not pretty.

Why tamper with perfection, you might well ask. After all, Austen’s 1813 novel of manners and relationships is considered one of the finest in English literature (and has been adapted more respectfully multiple times for film and television).

Why indeed, except perhaps to pander to a new generation of nonreaders and the current vogue for blood, guts, and anything to do with the undead. Given the context — and that title — no one expects Shakespeare, and “Pride and Prejudice and Zombies” is an often enjoyable send-up of costume dramas.

Regrettably, however, the movie takes a jarring wrong turn with a disrespectful treatment of Christianity, placing what could have been an amusing — if occasionally gory — trifle well outside acceptable bounds for viewers of faith.

This detour also would have pained Austen, a clergyman’s daughter who may have poked fun at the foibles of some of her characters in the ministry, but whose underlying faith — the source of her sympathy with those very shortcomings — is evident across her works.

Additionally, the basic plot is retained. A country couple, the Bennets (Charles Dance and Sally Phillips), have five daughters. Their top priority is to marry each to someone with good prospects and a healthy bank balance.

Admirers of Austen’s novel will wonder why the ladies are sitting around cleaning pistols and sharpening swords, instead of knitting, and why they conceal daggers under their skirts.

“My daughters are trained for battle, not the kitchen,” Mr. Bennet proudly tells the suitors. “A woman must have a thorough knowledge of singing, dancing and the art of war.”

And so the picture veers off into an alternate universe. As this story goes, a deadly plague in the 1700s unleashed a “zombie apocalypse” with the dead rising and feasting on human flesh. Britain was overrun, and fortifications were built to contain the epidemic.

Young women like the Bennet girls were dispatched to China to learn martial arts and swordplay, transforming them into more fetching counterparts to the Teenage Mutant Ninja Turtles.

As the war advances, Elizabeth — now called “Lizzie” — meets an unlikely suitor, Fitzwilliam Darcy (Sam Riley). She’s repelled by his apparent arrogance but impressed by his prowess in beheading and garroting zombies.

“Pride and Prejudice and Zombies” ultimately collapses in on its own silliness, but not before several disturbing references to the Christian faith. The worst finds zombies attending a service inside “St. Lazarus Church,” where they consume an unorthodox — to say the least — version of the “blood of Christ,” hoping for a cure.

The muddled proceedings leave it unclear whether evil zombies or irreverent filmmakers ought to be blamed for this ghoulish, quasi-sacrilegious parody of the Eucharist. Either way, moviegoers would do better to stay home and brush up on their Austen.

The film contains an exploitative use of the sacred, bloody violence and some sexual innuendo. The Catholic News Service classification is O — morally offensive. The Motion Picture Association of America rating is PG-13 — parents strongly cautioned. Some material may be inappropriate for children under 13.

NEXT: ‘Hail, Caesar!,’ and farewell to a bygone era