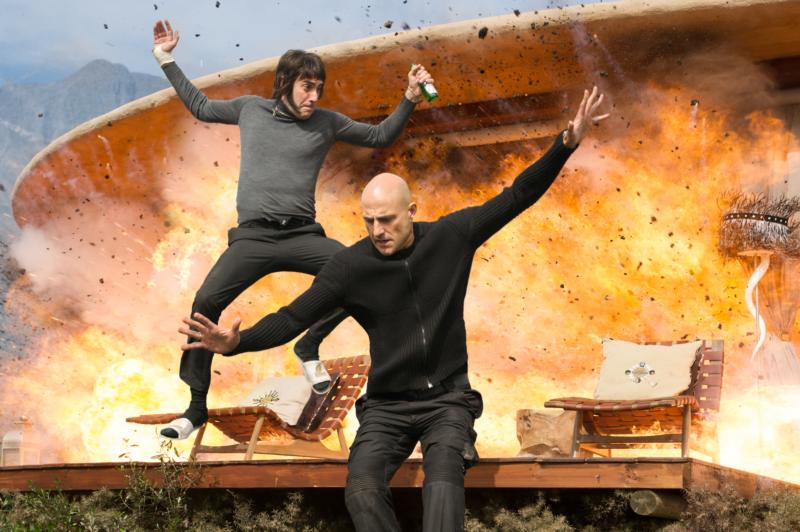 Sacha Baron Cohen and Mark Strong star in a scene from the movie "The Brothers Grimsby." (CNS photo/Sony Pictures)

NEW YORK (CNS) — Written by and starring Sacha Baron Cohen, the comedy “The Brothers Grimsby” (Columbia) clearly wants to show it has its heart in the right place.

Unfortunately, a sense of taste is nowhere on display as Baron Cohen and director Louis Leterrier pursue gross-out giggles in a chase that takes them far over the line separating the merely awkward from the nauseating.

As a result, the themes of altruism, family love and the inherent value of working-class lives Baron Cohen incorporates into his script sink into a mire of nastiness.

The premise is one of those dopey, only-in-Hollywood setups that might be excusable if the humor it delivered were in the least enjoyable. Bumbling halfwit Nobby Butcher (Baron Cohen) grins his way through a happy-go-lucky existence in depressed Grimsby, the North-of-England equivalent of a Rust Belt town.

He loves his live-in girlfriend Dawn (Rebel Wilson) — though not enough, apparently, to marry her — and his nine children. He’s also a favorite down at the pub where he entertains his protective community of eccentric slobs by, among other antics, launching fireworks out of his backside.

Nobby has only one source of sorrow in his life: the absence of his long-lost brother Sebastian (Mark Strong). So when Sebastian is accidentally located, Nobby loses no time in tracking him down.

As viewers have already been shown, however, Sebastian is a skilled secret agent engaged in a delicate mission with international repercussions. Thus his unexpected reunion with his bull-in-a-china-shop sibling instantly — and predictably — degenerates into a disaster.

Nobby not only compromises Sebastian’s undercover operation, he manages to do so in a way that makes it appear as though Sebastian has turned traitor. Where can Sebastian take refuge long enough to clear his name? Why, among the good folk of Grimsby, of course.

Since the solution to Sebastian’s woes involves defeating a plot to kill off proletarian “scum” like Nobby and his ilk, there’s an anti-snobbery message to the film that can also be read as a Catholic-friendly warning against eugenics. A further subtext makes a satiric target of the kind of worldwide aid agency often regarded with suspicion by those opposed to the cultural imperialism about which Pope Francis has repeatedly warned.

Add to that the screenplay’s (admittedly off-kilter) celebration of self-sacrificing brotherly bonds, and the underlying substance of the picture would seem to be one worthy of applause. But the comic fare closer to the surface of “The Brothers Grimsby” is so demeaning to human sexuality and so repulsive generally that the task of digging down through it turns out to be a dispiriting exercise in dumpster diving.

The film contains strong sexual content, including graphic acts and full nudity, constant action violence with some gore, drug use, extremely coarse humor, at least one use of profanity and considerable rough and crude language. The Catholic News Service classification is O — morally offensive. The Motion Picture Association of America rating is R — restricted. Under 17 requires accompanying parent or adult guardian.

NEXT: A scary yet clever thrill ride along ’10 Cloverfield Lane’