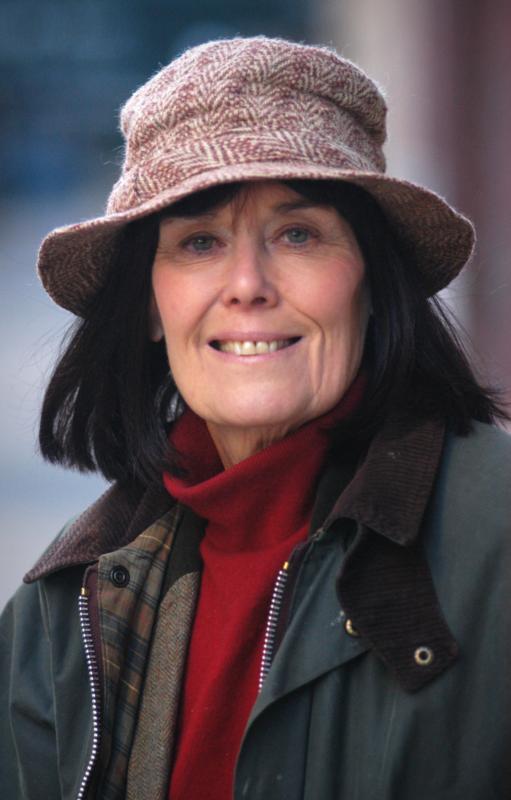 Chicago native Mary Pat Kelly is seen in this undated photo. The author has written a substantial body of work that, for the most part, celebrates the Irish Catholic experience in the U.S. and internationally. (CNS photo/courtesy Mike Mastromatteo)

TORONTO (CNS) — Given Irish history and the people’s struggles with the great famine, British absentee landlord oppression, and the 19th-century migrations to North America, there is virtual storehouse of material for historical fiction, especially for a writer with an Irish-Catholic sensibility.

Chicago native Mary Pat Kelly has researched her family history to produce a substantial body of work that, for the most part, celebrates the Irish Catholic experience in the U.S. and internationally.

Her two most recent novels, “Of Irish Blood” and “Galway Bay,” provide a fictionalized account of the lives of her ancestors in19th-century Galway, Ireland, and later in Chicago.

Kelly’s novel, “Special Intentions,” is based on the author’s six years’ experience as a postulant at the motherhouse of the Sisters of Providence at St. Mary-of-the Woods, Indiana, near Terre Haute.

“I feel drawn to tell certain stories,” Kelly said in a recent interview with Catholic News Service. “I’ve been very lucky in my life by having some incredible experiences,” adding that it took her 40 years to track down all her Irish roots.

While the heroines in Kelly’s fiction exhibit skepticism about the Catholic faith and some of its basic doctrine, there remains a bedrock of appreciation, belief and respect for tradition. Consider the situation facing Honora (Nora) Kelly, protagonist of “Of Irish Blood.” Fleeing a destructive relationship with a shifty Chicago hoodlum, Nora seeks to make a fresh start on life in Paris before World War I.

After finding absolution of sorts from Father Kevin, a Paris-based Irish priest secretly working for Irish independence, Honora learns something about grace and redemption. A priest of the Irish College of Paris, Father Kevin recognizes her struggle to return to the faith.

“I apologize to you Honora,” says the Father Kevin character, “on behalf of the priests who made Catholicism seem a religion that condemns us to guilt and shame. … How sexual morality became the be-all and end-all of so much of Catholicism, I don’t know. It’s been made more important than kindness or mercy.”

Afterward, Honora seems almost surprised that absolution can be so simply obtained.

“It’s just like that,” Father Kevin reminds her. “Grace flows; it doesn’t drip and drop.”

It’s clear that Kelly’s sense of being Irish is as central to her identity as is her Catholic faith.

“I think it is a part of who I am as a person,” she told CNS. “When I draw on my experiences, so many of them are within the Catholic faith. I’m from Chicago. I grew up in an Irish Catholic family. I went to Catholic schools, and I was in the convent for six years. I entered when I was 17 and I was caught up in the changes of Vatican II. I was really formed by the Catholicism of my youth, but my college years was the time I really came to discover the church.”

In addition to providing the raw material for “Special Intentions,” Kelly’s convent experience fostered her appreciation for civil rights work. And while she only professed temporary rather than final vows, there’s no doubt her convent experience, coupled with the traditional Irish-Catholic upbringing, had a profound impact on the future novelist and filmmaker.

“My time in the convent was a wonderful awakening,” Kelly says. “I mean there were painful times too, as anyone who went through that experience will tell you, but it really was a deep, rewarding experience. I made a lot of good friends, and it gave me an opportunity to be on the margins of society, which I might not have felt if I hadn’t had the convent experience.”

Kelly is now based in New York City with Irish-born husband Martin Sheerin. Ever eager to expand her knowledge of things Irish, Kelly jokes that her husband’s ear for the sound of Irish speech is a blessing when it comes to authenticating the dialogue she creates in her Irish-centered novels.

Equally at home in fiction, biography, documentary filmmaking and television show production, Kelly won acclaim as a producer for TV shows as diverse as “Good Morning America” and “Saturday Night Live.” She has produced noted documentaries on African-American sailors in World War II, plus a pair of biographies of one of her film mentors, Martin Scorsese. Her 1986 documentary, “To Live for Ireland,” was nominated for an Emmy.

Kelly is now at work on another novel, tentatively titled “Irish Above All.” It will focus on the life and work of Edward J. Kelly, mayor of Chicago from 1933-1947 and a great uncle of the author.

“There are stories that I want to tell, and which I feel connected to in ways that are very providential,” Kelly said. “I think as an artist, as a filmmaker and as a writer, in some little way you are participating in that creativity. It’s a real privilege.”

When not researching a novel, biography or film script, Kelly still likes to visit Chicago to see family and touch base with her “Chicago-Irish” roots. A big part of that going home again experience comes by visiting her two favorite Chicago parishes, St. James and what the locals call “old” St. Patrick’s.

“If anyone wants to feel really good about being Catholic, go to Mass at one of those two Chicago parishes,” she said.

Mastromatteo is a Toronto writer and editor.

PREVIOUS: ‘Miracles From Heaven’ dispel a dark night of doubt