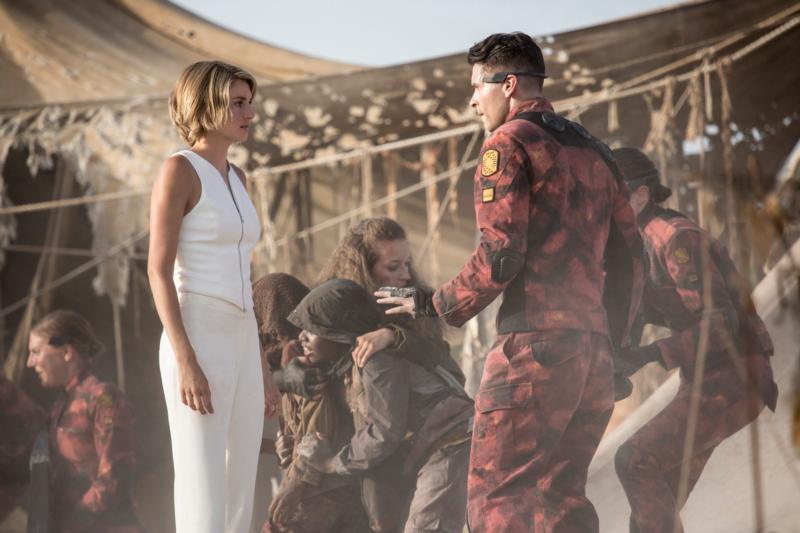 Shailene Woodley and Andy Bean star in a scene from the movie "The Divergent Series: Allegiant." (CNS photo/Lionsgate)

NEW YORK (CNS) — The third time’s not a charm with “The Divergent Series: Allegiant” (Summit), a ponderous adaptation of the final book of the futuristic trilogy by Veronica Roth.

With no less than four screenwriters in tow, Robert Schwentke returns as director of this sequel to last year’s “The Divergent Series: Insurgent,” picking up right where the story left off.

Viewers will recall that our heroine, Tris (Shailene Woodley), brought down the wicked faction system that divided families in post-apocalyptic Chicago. In doing so, she unearthed a big secret: The Windy City is a giant petri dish, a 200-year experiment in genetic engineering controlled by beings who live on the other side of the city wall.

Curiosity may kill the cat, but it won’t stop Tris and Four (Theo James), her mentor-lover, from venturing out into the forbidden zone as their city descends into anarchy and former leaders fight for control. Evelyn (Naomi Watts), Four’s mother, arranges show trials and public executions. She is countered by the saintly Johanna (Octavia Spencer), who preaches peace but is not afraid to use her weapon.

So over the Great Wall of China — make that Chicago — they go, Tris and Four along with an ally, Christina (Zoe Kravitz), and two former traitors: Tris’ brother, Caleb (Ansel Elgort), and the wily Peter (Miles Teller).

Our intrepid quintet traverses a radioactive wasteland before being plucked by spaceships and whisked off to a gleaming city on the site of O’Hare International Airport. (“What’s an airport?” Caleb asks.)

This is the Bureau of Genetic Welfare, where a charismatic leader, David (Jeff Daniels), has been overseeing the Chicago experiment, which (surprise!) isn’t going well. He is obsessed with Tris as she is the only person in the whole wide world with healthy genes, and therefore key to correcting the genetic mutations plaguing her fellow Chicagoans.

It’s all rather complicated, and silly, as the action ramps up and David’s true intentions emerge. The old ad slogan “It’s not nice to fool with Mother Nature” comes to mind.

While “The Divergent Series: Allegiant” is not nearly as violent as its predecessors, it does contain several scenes which may be too intense for younger viewers.

Ardent fans will be delighted to learn this is not the end of the film series: Roth’s final novel has been divided in two, promising yet another sequel.

The film contains intense violence and action, brief rear female nudity, and some crude language. The Catholic News Service classification is A-III — adults. The Motion Picture Association of America rating is PG-13 — parents strongly cautioned. Some material may be inappropriate for children under 13.