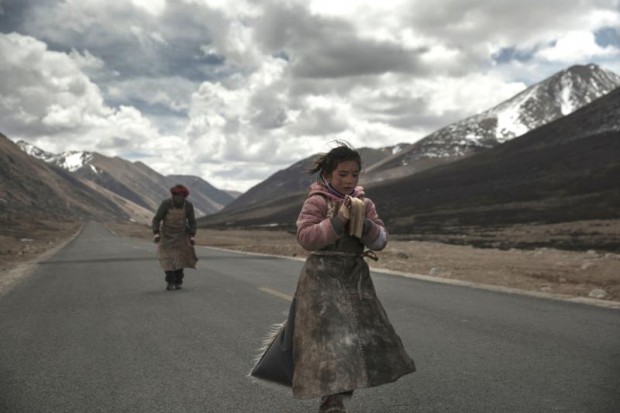 This is a scene from "Paths of the Soul," a Chinese film production about Tibetan Buddhists on pilgrimage, that won the Signis Jury Award at the 30th annual Filmfest DC in Washington, which concluded April 24. Signis is the official world Catholic association for communication. (CNS photo/courtesy of Icarus Films)

WASHINGTON (CNS) — “Paths of the Soul,” a Chinese film production about Tibetan Buddhists on pilgrimage, won the Signis Jury Award at the 30th annual Filmfest DC in Washington, which concluded April 24.

Directed by Zhang Yang, “Paths of the Soul” offers “a look at a religious tradition different from that of most Westerners, and in so doing expands our understanding of human yearning for the divine,” said an April 25 statement from jury chair Frank Frost.

The movie “combines stunning cinematographic vistas with intimate details to track the pilgrimage by foot of 11 rural Tibetan Buddhists over steep mountains, across streams, and winding roads to their sacred city of Lhasa,” said the Signis jury citation. The journey of 1,200 miles, taking many months, is “a metaphor of an inner journey as well, marked by untiring dedication no matter what obstacles they face,” it added.

“There is no antagonist or ‘bad guy’ in the story, only obstacles that must be overcome,” said Guido Convents, a Signis juror from Belgium. “This is a journey to find harmony with the earth, and all who are in it.”

Signis also awarded a commendation to a Cuban film, “Behavior.”

“Set in contemporary Cuba, it tells the story of an empathetic, experienced schoolteacher on the verge of her retirement. Carmela goes beyond obligation to personally help two students with issues arising out of their extreme poverty, defending them against harsh and rigid application of rules by an administration which favors the law over love,” the jury said. “The film makes a plea for a more humane society in which the lives of everyone, especially the marginalized, also count.”

Others on the Signis jury were Marjorie Suchocki of Texas, Gregory Friedman of Washington and Mary Link Frost of McLean, Virginia, a Washington suburb.

Signis is the official world Catholic association for communication. It has been seating juries and presenting awards at major international festivals since 1947, including Cannes, Venice, and Berlin, and added Filmfest DC in the past decade. Juries are now active in festivals in nearly 40 countries. By its presence in the professional cinema world, Signis seeks to contribute in a concrete way to the development of a cinema informed by human and spiritual values.

NEXT: Secrets abound in ‘Mother’s Day’ but pretentions are clear