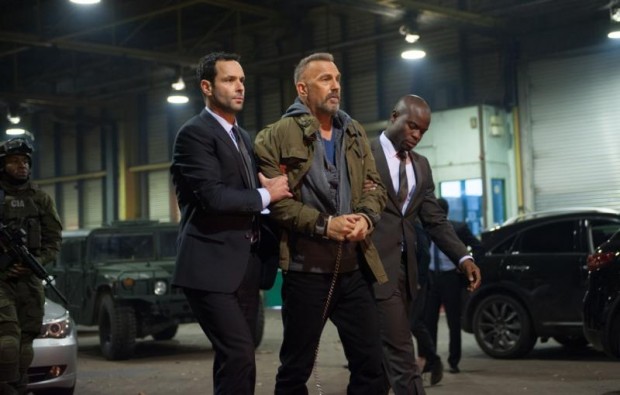 Kevin Costner, center, stars in a scene from the movie "Criminal." (CNS photo/Lionsgate)

NEW YORK (CNS) — The spirit of “Young Frankenstein” looms over the contrived plot of the mind-swap yarn “Criminal” (Summit). Since the newer film is meant to be a serious action adventure, that’s not such a good thing.

While crass, moreover, Mel Brooks’ 1974 comedy was at least a clever spoof. “Criminal,” by contrast, hovers tediously within a moral vacuum of its own making.

Bill Pope (Ryan Reynolds), a CIA agent on the trail of an international conspiracy, is tortured and killed while delivering ransom money in London.

His body is somehow recovered just in time for a dubious medical procedure involving a beeping noise, flashing lights and a brain probe. The purpose of this operation is to transfer most of the deceased’s memory into someone else’s head, as if implanting it there with a flash drive.

As presented in Douglas Cook and David Weisberg’s script, the general idea, though it’s never fully explained, appears to be that if a smart guy’s reasoning processes and store of ideas can be put into someone with no empathy, and therefore no fear, the CIA overlords can prevail.

Much like the Scarecrow in “The Wizard of Oz,” Jerico, we’re meant to infer, can save the planet — if he thinks of things he never thunk before.

While all this is kicking in, director Ariel Vromen has Jerico lurching around, terrorizing Pope’s wife, Jill (Gal Gadot), and committing occasional mayhem-ridden robberies at immigrant-owned eateries. Complaining of constant headaches, he begs Dr. Franks (Tommy Lee Jones), the neurosurgeon responsible for his peculiar plight, for more pills.

Matters progress oh, so seriously because the Americans are trying to waylay a hacker named The Dutchman (Michael Pitt). Dutch, it seems, has broken into enough of the military’s computerized systems to launch a nuclear salvo, if the mood strikes him.

Despite the supposedly high stakes, however, Jerico’s walls come tumblin’ down rather rapidly, at least as far as audience engagement is concerned. What’s revealed within is … not a whole lot.

The film contains much bloody violence, including scenes of torture, and frequent rough language. The Catholic News Service classification is L — limited adult audience, films whose problematic content many adults would find troubling. The Motion Picture Association of America rating is R — restricted. Under 17 requires accompanying parent or adult guardian.

PREVIOUS: “Patience”: The dangers of changing the past

NEXT: ‘The Story of God’ ponders life, death and the divine