‘The Story of God’ ponders life, death and the divine 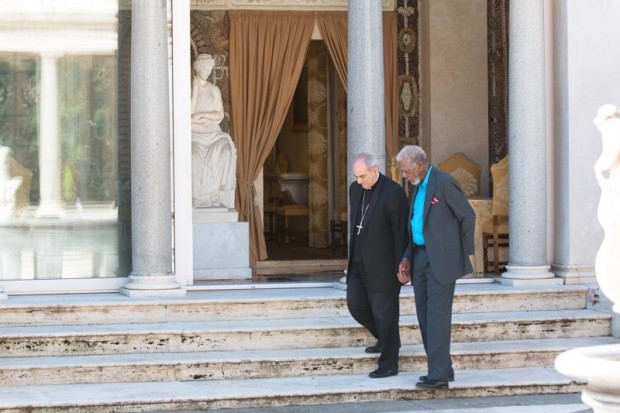 NEW YORK (CNS) — Weighty issues of life, death and the divine take center stage in “The Story of God,” an ambitious series now showing on the National Geographic Channel on cable TV.

Actor Morgan Freeman serves as narrator and host for this six-part series, produced by Revelations Entertainment. Different cultures and religions are examined for their answers to such perennial questions as: “Who is God?” “Where did we come from?” “Why does evil happen?” and “What happens when we die?”

No expense is spared as Freeman hops aboard a private jet and crisscrosses the globe, visiting 20 cities in seven countries. He ponders ancient Mayan and Aztec rituals in Mexico, unravels the complex history of Christians, Jews and Muslims in the Holy Land, and visits sacred Buddhist and Hindu sites in India, among other exotic locales.

The first three episodes broadcast so far have focused, respectively, on creation, the apocalypse and the afterlife. The intention is to find common ground among believers, comparing sacred texts, beliefs and myths.

By juxtaposing the story of Adam and Eve with the big-bang theory of creation, Freeman acknowledges the age-old battle between science and religion, and explores how they can coexist. The idea that all life was generated from a cloud of cosmic dust is shown to be intriguingly similar to the creation story in the Quran, and the beliefs of the Aboriginal people in Australia.

The voice of reason is provided by the Vatican through the person of Msgr. Marcelo Sanchez Sorondo, chancellor of the Pontifical Academy of Sciences. The big-bang theory does not explain away the Book of Genesis, he notes, since it does not say what existed before the big bang.

Regarding notions of an impending apocalypse, Freeman notes that “none of this is new. We have been predicting the end of the world for thousands of years.”

After recounting the prophesies in the Book of Revelation, the series examines how modern-day radical groups, including doomsday cults and the self-proclaimed Islamic State caliphate, exploit and misinterpret ancient texts for their own benefit.

An interesting perspective is provided by survivors of 2005’s Hurricane Katrina in New Orleans. Convinced the end was near and death imminent, they found their faith tested — yet they emerged more strongly convinced than ever of the power of prayer and the possibility of deliverance.

On the afterlife, Freeman observes that hope is a universal human instinct. “Some people have a certainly that helps them cope with grief,” Freeman observes. “What happens when we die? How can any of us know?”

A detailed examination of Egypt’s famous pyramids — outsized testimony to their builders’ belief in life after death — is followed by Freeman’s survey of a wide array of contemporary views on the subject.

These range from the Hindu belief in reincarnation and reflections from people who have had near-death experiences, to the frankly wacky scheme put forward by a same-sex couple in New York City. The duo hopes to “cheat death” through artificial intelligence, transferring their memories to a creepy robot.

Freeman concedes that, for Christians, the resurrection of Jesus is the ultimate victory over death, the promise of everlasting life for those who follow his teachings.

Subsequent episodes, airing Sundays through May 8, will address the identity of God, the problem of evil and the nature of miracles.

Not surprisingly, “The Story of God” straddles a middle ground, offering information rather than conviction, enlightenment — or at least education — in lieu of judgment.

Christian viewers will find this series an interesting primer on other religions and cultures. They will note, however, that Freeman sometimes seems more interested in Hinduism, Buddhism and the mythology of ancient Egypt — not to mention the human sacrifices of the Aztecs — than in the message of the Gospels.

“It is my fervent hope that people open their hearts and minds and see that our beliefs don’t have to divide us,” Freeman concludes. “They have the power to unite us, to allow us together to achieve remarkable things, as it was in the beginning, is now and ever shall be, world without end.”

As that last rhetorical mash-up of the human and the divine suggests, audiences will need to bring a certain level of maturity and a store of good catechesis to “The Story of God.” Among other things, those resources will enable viewers to separate the laudable desire for harmony from a dangerous tendency toward theological indifference.

Although the episodes reviewed are free of objectionable content, in light of the foregoing, the series can only be recommended for youngsters if treated as a starting point for parent-guided family discussions.