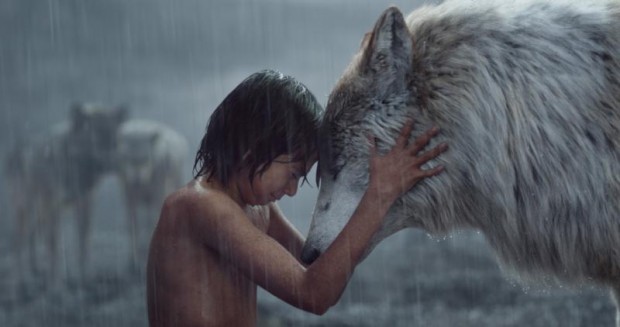 Neel Sethi stars in a scene from the movie "The Jungle Book." (CNS photo/Disney)

NEW YORK (CNS) — Forest, fauna and beast never looked as good as they do in “The Jungle Book” (Disney), a lavish retelling of the 1894 collection of stories by British author Rudyard Kipling.

What makes this “live-action” 3-D adaptation particularly compelling is that, apart from the “man-cub” Mowgli (Neel Sethi), everything on screen, from the breathtaking jungle landscapes to the meticulously detailed creatures great and small, was created on a computer. A cheeky line at the end of the credits, “Filmed in Downtown Los Angeles,” attests to this surprising fact.

Hence, this “Jungle Book” has much in common with another in-house creation, Disney’s beloved 1967 animated take on the tales. In fact, director Jon Favreau (“Chef”) and screenwriter Justin Marks pay homage to that movie with moments of humor and by incorporating its toe-tapping tunes, “The Bare Necessities” and “I Wanna Be Like You.”

A few scary sequences aside (the jungle is a dangerous place, after all), this version makes delightful, good-natured, heartfelt entertainment for the entire family.

Kipling’s basic plot endures: Mowgli, orphaned as a baby, is discovered by a kindly panther, Bagheera (voice of Ben Kingsley). He brings this child to a pack of wolves which raises him as one of their own, instilling a strict moral code and respect for family and other critters. Fortunately for Mowgli — and the audience — all of the anthropomorphic animals speak perfect English.

But danger lurks in the guise of Shere Khan (voice of Idris Elba), a menacing tiger who threatens the peaceable kingdom. Man is a threat, he warns, especially the “red flower” he commands — fire.

Shere Khan demands that the wolves surrender Mowgli, now 10 years old, to him for killing. “How many lives is a man-cub worth?” he challenges.

Mowgli decides to leave home to protect his wolf family and, with Bagheera’s help, makes his way toward the distant “man village.” An accident separates the duo, and Mowgli is swept deep into the jungle, where he is threatened by Kaa (voice of Scarlett Johansson), a seductive python.

All hope seems lost until Mowgli encounters a happy-go-lucky bear named Baloo (voice of Bill Murray). An unlikely friendship strikes up, which will serve Mowgli well in a showdown with Shere Khan and another would-be despot, King Louie (voice of Christopher Walken), boss of all primates.

“The Jungle Book” barrels to an action-packed conclusion that may frighten the youngest moviegoers. But ultimately it’s all good escapist fun.

Besides possible scares, parents also may want to take note of a passing reference to a non-biblical creation story. This myth could serve as the opportunity to discuss, in an age-appropriate way, the Christian understanding of life’s origins.

Amid the “sturm und drang” generated by most Hollywood blockbusters, “The Jungle Book” presents a welcome opportunity, as Baloo croons, to “forget about your worries and your strife.”

The film contains a few scenes of peril. The Catholic News Service classification is A-II — adults and adolescents. The Motion Picture Association of America rating is PG — parental guidance suggested. Some material may not be suitable for children.

NEXT: “Patience”: The dangers of changing the past