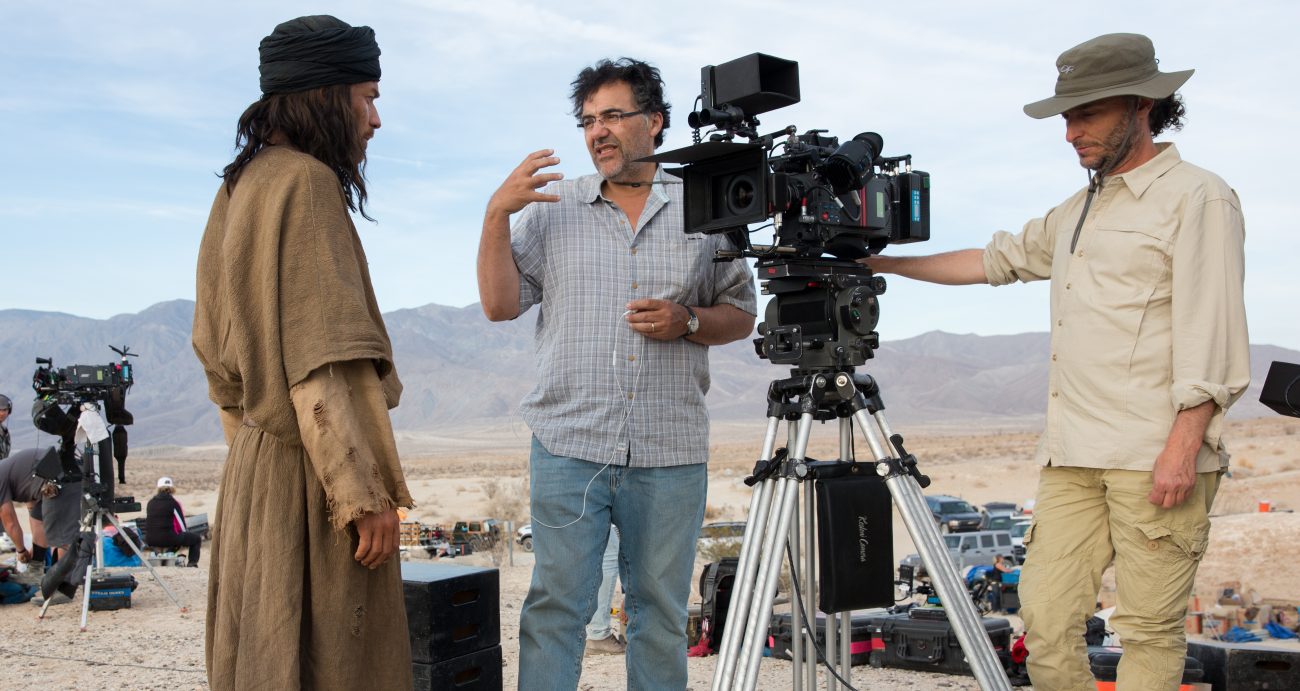 Ewan McGregor, writer-director Rodrigo Garcia and cinematographer Emmanuel Lubezki are pictured on the set of "Last Days in the Desert." Garcia has long had the idea of doing a film about Jesus being tempted in the desert by someone looking a lot like himself. (CNS photo/Broad Green Pictures)

WASHINGTON (CNS) — The idea of having Jesus tempted in the desert by someone looking a lot like himself was in the mind of Rodrigo Garcia, the writer-director of the new movie “Last Days in the Desert.”

“The moment I thought of the demon, I thought, ‘How on earth am I going to present him?’ He’s here on earth to destabilize, to make doubt, to make him insecure. I thought it would be, from a narrative point of view, interesting to have someone in your image tell you that you aren’t ready, that you are not good enough. I thought it would be visually interesting. Right away it was a good idea,” Garcia said in a May 4 telephone interview with Catholic News Service from Los Angeles, where he was doing promotional work for the movie.

Ewan McGregor, perhaps most famous for his portrayal of young Obi-Wan Kenobi in the second trilogy of the “Star Wars” series, plays both Jesus — here, Yeshua — and the devil in “Last Days.”

The temptations are not those found in the New Testament accounts, but are more subtle than having the devil exhorting Jesus to throw himself down from a cliff so angels could rescue him, or to worship Satan.

“I had this idea that Jesus might be coming out of his 40 days of prayer and fasting and temptation in the desert, and in the last three days run in to a father and son in the desert having a conflict, and Jesus might be trying to intervene, to have him, perhaps, getting subconsciously into a father-son situation” akin to one Jesus could face with his heavenly father, Garcia said, adding, “I don’t know when and how it came to me.”

Garcia admitted he “had some concerns about my ability to raise money to about a movie set in the desert with Jesus,” saying he was unaware of the surfeit of religion-themed movies that were being made.

“When I wrote the movie and was trying to get it off the ground, there were not that many movies. If I were doing it now, I would be a little more wary,” he told CNS. “But I think the movies that are made, regardless of the quality and the talents, sort of stay strictly in the Gospel — certainly theologically or from the point of view of faith. They are very aligned with … the conservative Christian storytelling.”

Even so, Garcia said, “the figure of Jesus is big enough and the circumstances are extraordinary enough, that they can withstand many different interpretations. I think the Jesus in (Italian director Pier Paolo) Pasolini’s ‘Passion According to Matthew,’ or (Martin) Scorsese’s movie ‘The Last Temptation (of Christ)’, or (Denys Arcand’s 1989 film) ‘Jesus of Montreal,’ they’re all very different visions of Jesus that probably resemble the artists that created them.”

Garcia, of Colombian heritage who grew up in Mexico and Spain, considered neither himself nor his parents religious, but “my mother went to Catholic schools and my father was always a big reader of the Bible, the Gospel. So we’re not religious, but we did love the Holy Book. And we did read it, and as child I read many versions of the story of Jesus and I was very much intrigued and fascinated by it.

“Even if you’re not a religious person, you can’t help but be awed by the mystery. The life of Jesus is certainly a very good entry into the mystery,” he continued. “Even not being particularly religious, I thought this was a story that interested me in its capacity as arguably the most famous son in the world, dual nature, both divine and human, a huge mission to undertake and potentially a huge sacrifice ahead of him.”

One element of the promotional aspect of “Last Days” Garcia took a shine to is, “unlike with other movies, it’s people taking about the movie themes. Not the star, not the anecdotes. For some reason this picture demanded that it be talked about its themes. So that has made the press process much more enjoyable.”

PREVIOUS: Author finds controversy in life of great-grandfather most saw as heroic

NEXT: With ‘Nice Guys’ like these, who needs bad guys?