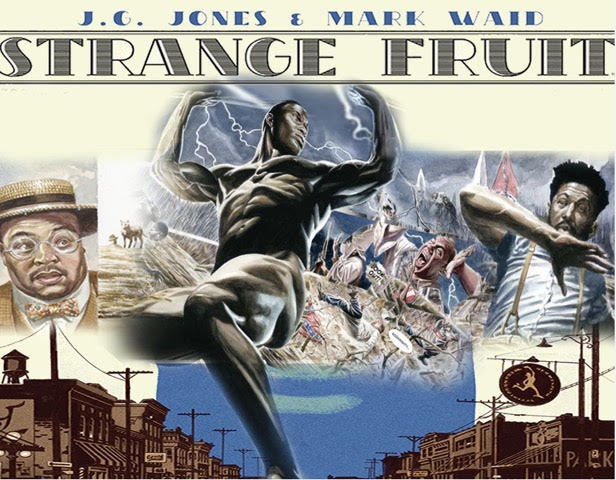 This is an image from the comic book series “Strange Fruit.” (CNS photo/Boom Studios)

NEW YORK (CNS) — The recipe for “Strange Fruit,” a four-issue limited series comic from Boom Studios, is easily described. Take one part Superman, add elements of the 1967 civil rights-themed film “In the Heat of the Night” and season with bits of the 1951 sci-fi classic “The Day the Earth Stood Still.” Then subtract good writing from the mix.

It’s 1927 in the fictitious burgh of Chatterlee, Mississippi. Heavy rains are threatening the levee, and thus the town. Frantic preparations are underway but they’re being crippled by the racial tensions in the community. And that a young white boy has gone missing isn’t helping matters.

Suddenly a fiery object crashes to earth, and emerging from the wreckage is a huge black man — or rather, an alien being who resembles a black man. This super-powered extraterrestrial doesn’t speak. Instead, he tosses a tree at a group of Klansmen, then breaks into the local “whites only” library and starts reading.

“Strange Fruit” is co-written by comic veteran Mark Waid and illustrator J.G. Jones. It takes its name from a 1930s protest song — recorded, most famously, by Billie Holiday — that powerfully laments the lynching of black men in the South.

Nudity is not directly depicted in “Strange Fruit,” though it is implied in part of the story. Additionally, there are situations and dialogue — including racial slurs and occasional cursing — that make this an unsuitable choice for youngsters.

One fundamental defect in “Strange Fruit” results from Waid and Jones’ decision to make their tale’s most fantastic and shocking character, that visiting alien, a mute. The concept of having a black Superman land in the American South on the eve of the Depression is a compelling one. But for this promising premise to work, the reader needs exposition. And that means the protagonist has to speak.

Marvel legend Stan Lee is a master of this approach as he demonstrated by his handling of a similar character, the Silver Surfer. Like Waid and Jones’ invader, Lee’s “Sentinel of the Spaceways” is an alien who arrives on Earth only to find himself baffled by human behavior. But, by contrast with the silent — and nameless — Ubermensch at the center of “Strange Fruit,” the Surfer is given to grand soliloquies.

These speeches, full of inspired erudition, show the heart of the Surfer’s character. His rhapsodies about the natural wonders of our planet reveal a creature capable of appreciating beauty — and one who believes in honor and truth.

In the absence of such informative discourse, Waid and Jones provide no explanation for who their alien is or what he’s doing on here on Earth, much less in Chatterlee. Clothed, ironically enough, in a confederate flag given to him by a sympathetic resident (he wears it draped around his waist), the initially naked alien mostly seems lost. Readers may feel the same way, despite the gorgeously painted panels of Jones’ artwork.

Another difficulty: The outsized intruder’s persona echoes, even if unintentionally, stereotypical portrayals of black men in American culture. These depictions present African-American men as physically overpowering but illiterate brutes. This parallel has led to some pushback against “Strange Fruit” on the part of online critics.

Deprived of input from their main character, Waid and Jones are forced to fall back on other figures and on the drama surrounding the flood. In the 1920s, the Mississippi Delta was a fertile agricultural region that required a large labor pool. And, despite the terrible prevalence of racism, at least some white leaders wanted to maintain civil relations with African-American workers.

This conflicted dynamic plays out in “Strange Fruit” as white politicians appeal to civic pride in an effort to convince Chatterlee’s poor blacks to help sandbag the town to prevent a total loss. African-Americans are understandably ambivalent. This is a place that gives free rein to the local Klan, after all. But it’s also the seat of their livelihood.

The fourth issue of the series has not been released yet. So there’s still a chance that Waid and Jones will conjure something smart out of the vague outline they have offered so far. But they’ll have to hurry; the water is rising.

NEXT: Those seeking sequel to ‘Finding Nemo’ will rejoice in ‘Finding Dory’