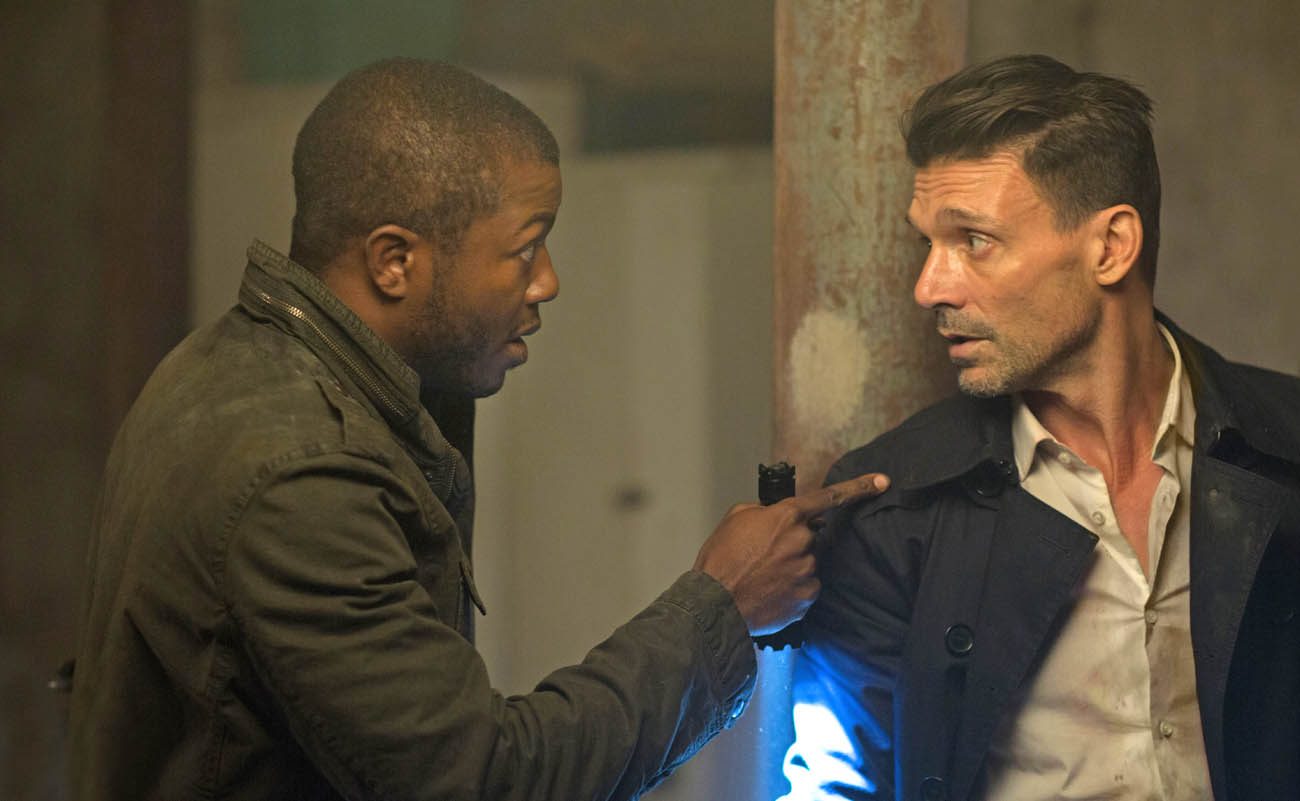 Edwin Hodge and Frank Grillo star in a scene from the movie "The Purge: Election Year." (CNS photo/Universal)

NEW YORK (CNS) — It’s little cause for surprise that “The Purge: Election Year” (Universal) sticks to the commercially tried-and-true formula of its franchise predecessors by appealing to the very impulses it pretends to condemn.

With equal predictability, the film relies, once again, on the premise first trotted out in the 2013 original — namely, a dystopian future America where one night a year is set aside for legally sanctioned murder and mayhem.

Nor would there be much to worry about in the fact that returning writer-director James DeMonaco adds a ham-fisted political message to the hypocritical mix, though it’s one so blatantly partisan that it comes across like an ad from the Democratic National Committee.

What eventually becomes astounding, however, is the degree to which DeMonaco deepens the religiously offensive elements of the second film in the series, 2014’s “The Purge: Anarchy,” into outright — and perverse — blasphemy.

The throwaway plot focuses mainly on Hillary Clinton stand-in Sen. Charlie Roan (Elizabeth Mitchell). A presidential candidate whose campaign is based on opposition to the saturnalia of slaughter, Roan is in the crosshairs of the ruling cabal who established it, the absurdly named New Founding Fathers of America, or NFFA.

Struggling to protect her is her bodyguard, the hero of the last outing, Leo Barnes (Frank Grillo). Gruff but good-hearted, Leo is personally as well as professionally committed to Roan and her cause.

Despite his best efforts, however, Leo and his charge end up on the dangerous streets of Washington on the big night. There they dodge malefactors before acquiring the protection of deli owner Joe (Mykelti Williamson), his younger sidekick, Marcos (Joseph Julian Soria), and his friend, Laney (Betty Gabriel), a volunteer ambulance driver during the purge.

These are, of course, the proletarian Good People. If you were in any doubt about that, you need only reflect that Marcos is a Mexican immigrant, while Joe has just had the insurance on his beloved store canceled by an uncaring corporation, and all uncertainty will be dispelled.

As for the Bad Guys, you just have to glance at the Confederate flag sewn onto the camouflage worn by Earl (Terry Serpico), the skinhead assassin dispatched to hunt Roan down, to gain your bearings. But Earl is merely the agent of the powerful, all-white NFFA, those guns-and-God types whose preferred future president is creepy Minister Edwidge Owens (Kyle Secor).

Owens, presumably a Protestant clergyman of an evangelical cast, serves as the conduit to the confused but vicious attack on Christianity’s most sacred beliefs and practices that coincides with the film’s climax.

Vested in something between a choir robe and priestly garb, Owens presides over a “Purge Mass” that combines the fiery oratory of a revival meeting with ritualized human sacrifice. And the venue for this infernal liturgy? The aptly named — and unmistakably Catholic — Church of Our Lady of Sorrows.

Further details would be superfluous. No person of goodwill should patronize “The Purge: Election Year.”

The film contains sacrilege and anti-Christian bias, much gory violence, about a half-dozen uses of profanity and pervasive rough and crude dialogue. The Catholic News Service classification is O — morally offensive. The Motion Picture Association of America rating is R — restricted. Under 17 requires accompanying parent or adult guardian.

PREVIOUS: ‘The BFG’: A smart children’s movie for sharp kids

NEXT: Books give church ministers insights on conflict, leadership