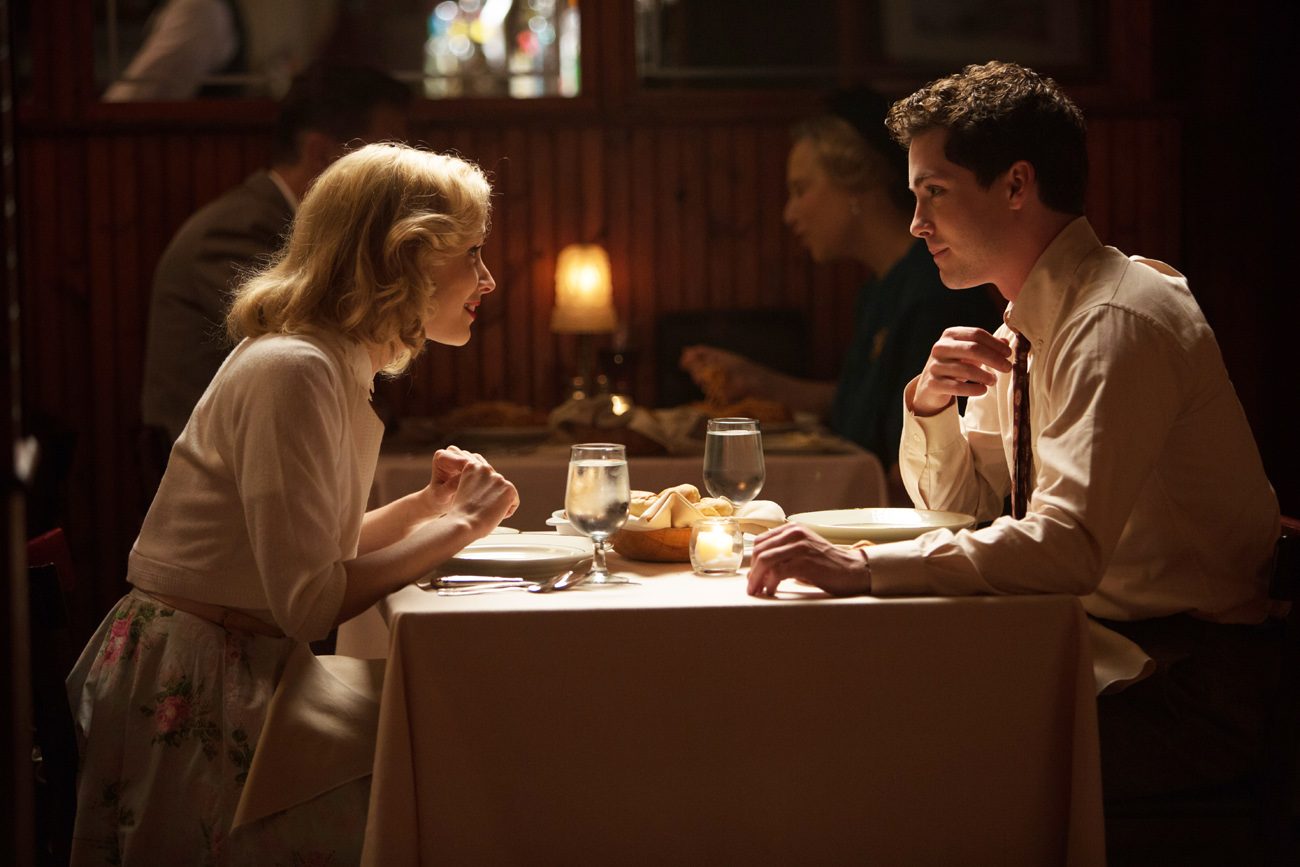 Sarah Gadon and Logan Lerman star in a scene from the movie "Indignation." (CNS photo/Roadside)

NEW YORK (CNS) — Set in the early 1950s, the challenging drama “Indignation” (Summit) portrays a version of American society that in many ways — and for both good and ill — no longer exists.

It’s a world where an intellectually gifted young Jewish man might find himself accepted to, but isolated at, an elite college. But it’s also a time and place where atheism was considered radical and where the same young man might be surprised, indeed perplexed, by a seemingly nice young lady’s willingness to engage in sex on a first date.

Marcus Messner (Logan Lerman), the protagonist of both Philip Roth’s 2008 novel and screenwriter and first-time director James Schamus’ adaptation, is subject to all these circumstances. He’s also living under the shadow of the Korean War in which, as some of the opening scenes show, one of his acquaintances from his hometown of Newark, New Jersey, has recently been killed.

Having won a scholarship to fictional Winesburg College in Ohio, Marcus is safe from the draft. But that doesn’t prevent his overprotective father, Max (Danny Burstein), from worrying obsessively about his future.

In fact, Max’s behavior is so excessive that, by the time Marcus actually departs, it’s begun to take a toll on his marriage. Marcus’ loving but sensible mother, Esther (a wonderful Linda Emond), can’t understand her husband’s endless — and apparently baseless — fretting.

Arriving on campus, Marcus sticks to his books and his job in the library, at least until fetching coed Olivia Hutton (Sarah Gadon) catches his eye. Smitten by the WASP-y doctor’s daughter, he asks her out for an evening together that culminates in a spontaneous, degrading act on her part that confuses Marcus at least as much as it gratifies him.

Indeed, as their relationship moves forward, Olivia’s promiscuous behavior and Marcus’ bewilderment about it prove a serious hindrance.

Another difficulty for Marcus presents itself in the person of Dean Caudwell (Tracy Letts), the traditionally minded embodiment of what Marcus regards as all the outmoded attitudes prevailing at Winesburg. A self-professed nonbeliever who has memorized whole passages of British philosopher Bertrand Russell’s essay “Why I Am Not a Christian,” Marcus particularly objects to the school’s requirement that he attend chapel.

Like Olivia’s wantonness, however, Marcus’ infidelity is not to be taken at face value.

Just as the former is a symptom of emotionally disturbed Olivia’s mental imbalance — we learn that she’s attempted suicide by slitting one of her wrists — so Marcus’ brash rejection of religion is part of his adolescent, and not very original, attempt at rebellion. That’s why Dean Caudwell’s response –- a strange mix of solicitude and stubbornness — drives the overly intense youth to distraction.

Based on the brief sample of it the audience is given, moreover, the predictably bland, interdenominational spirituality being parceled out in the college’s chapel is not an expression of faith in which most Catholics will feel much investment.

Schamus’ debut is obviously not for the casual moviegoer. But grown and well-grounded viewers will recognize the subtleties calibrating the story — and its message.

The film contains mature themes, including suicide and an ambivalent treatment of religion, brief violence with slight gore, discreetly portrayed but aberrant premarital sexual activity, fleeting irreverence, a couple of uses of profanity, at least one rough term and several crude expressions.

NEXT: Author’s new biography on Mother Angelica a fitting tribute to late nun