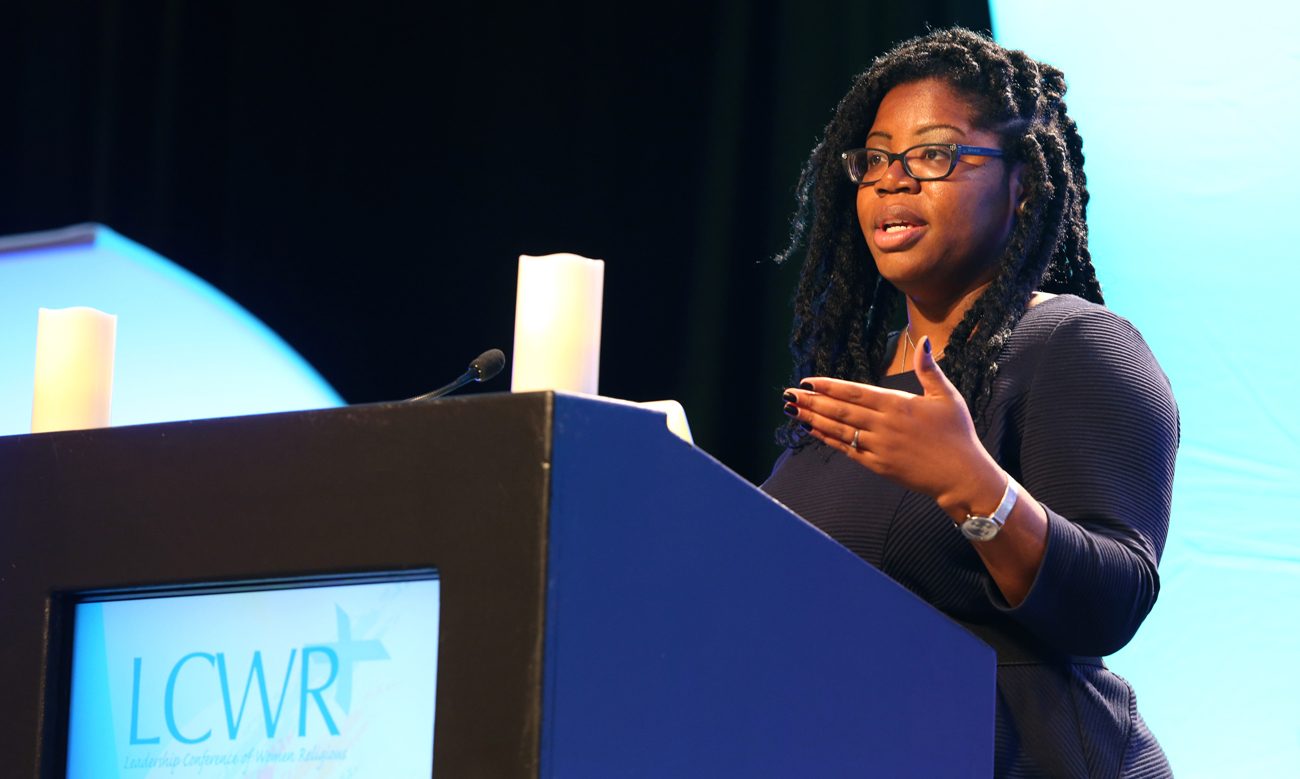 Shannen Dee Williams, assistant professor in the department of history at the University of Tennessee in Knoxville, addresses the Leadership Conference of Women Religious assembly in Atlanta Aug. 10. She spoke about racism and U.S. religious life. (CNS photo/Michael Alexander, Georgia Bulletin)

ATLANTA (CNS) — Black women desiring to serve a life devoted to the Catholic faith were not welcomed by religious communities with anti-black acceptance requirements from the early 19th century to the middle of the 20th century, said historian Shannen Dee Williams.

Those who could gain admittance faced discrimination from their fellow sisters, she added.

“Black sisters matter, but they constitute a dangerous memory for the church,” said Williams, assistant professor of history at the University of Tennessee at Knoxville.

She was joined by Sister Anita Baird, a Daughter of the Heart of Mary, and Sister Dawn Tomaszewski, general superior of the Sisters of Providence, on an Aug. 12 panel discussing racism in religious life at the assembly of the Leadership Conference of Women Religious in Atlanta.

Williams’ soon-to-be-published book is called “Subversive Habits: Black Nuns and the Long Struggle to Desegregate Catholic America.” It was the subject of her doctoral dissertation at Rutgers University.

Later, scores of sisters walked from the LCWR assembly being held in the Hilton Atlanta to Centennial Olympic Park to pray on the plaza outside the Center for Civil and Human Rights, which is dedicated to the achievements of the U.S. civil rights and worldwide human rights movements.

Predominantly black orders of religious women formed in the 19th century and faced bigotry when they taught black students in Catholic schools and attacks from white Catholics, in addition to the Ku Klux Klan.

Earlier, the participants wrote on slips of paper when they and their religious communities have not welcomed people of color. The slips became a “chain of bondage,” which was later broken after prayers of lamentation and a blessing.

Williams’ presentation was titled “Shattering the Silence: Black Women and the Challenge of History.”

The first black woman recognized as the leader of a religious community dates to the first century. She was St. Iphigenia, a princess from east Africa who converted to Christianity through the witness of St. Matthew, Williams said.

She is not well known in the United States, but there are shrines to St. Iphigenia in Brazil and Central America, Williams said, noting that the devotion was carried with enslaved people from Africa to the Western Hemisphere as result of the slave trade.

Looking at early American history, religious congregations in the 19th century had a test for accepting black women: if they could “pass for white,” Williams said. But even if they were admitted, they faced discrimination, such as being forced to take vows separately, she said.

These women in religious life were put in subservient roles, as domestics to the community, said Williams. They also could be cut off from their culture and family if the congregation forbade visitors out of concern that family members might look black, she said. Others pursued their vocation by traveling to Europe to join religious communities that were more welcoming, she said.

These orders faced bigotry when they taught black students in Catholic schools and faced attacks from white Catholics, in addition to the Ku Klux Klan, she said.

Barriers did not begin to drop until the mid-20th century although archival records show black women would enter the congregations and later leave congregations, in part because of racist attitudes.

In the civil rights era, the National Black Sisters’ Conference formed in 1968 out of the turmoil of the times and the assassination of the Rev. Martin Luther King Jr. Some 150 black women religious gathered at the time, and the conference is still active with a similar number of members.

In response to Williams’ remarks, which were met with a standing ovation, Sister Anita said resolving the past will take “more than singing ‘Kumbaya’ and celebrating Black History Month.” The history is a “moment of painful truth” and requires women religious and congregations to listen to women of color and not just give lip service to the effort, she said.

Sister Tomaszewski said before reconciliation it is necessary to acknowledge the past and become aware of congregations’ complicity with racism and discrimination. “Nothing matters more,” she said. 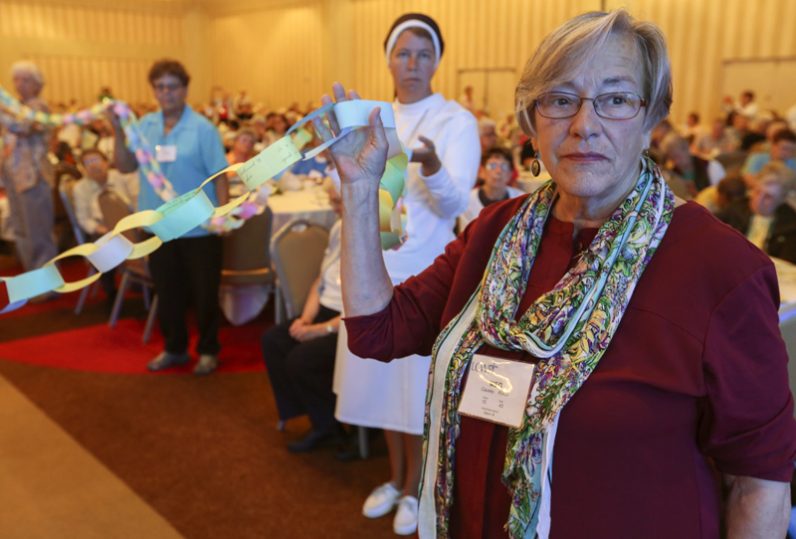 Sister Meg Causey, a member of the Society of the Sacred Heart from Poughkeepsie, N.Y., right, stands with other sisters as they hold a “chain of bondage.” Each link on the chain documents moments when an individual or her respective religious community was not welcomed to a person of color. A prayer and reconciliation service preceded the symbolic breaking of the chain. (CNS photo/Michael Alexander, Georgia Bulletin)