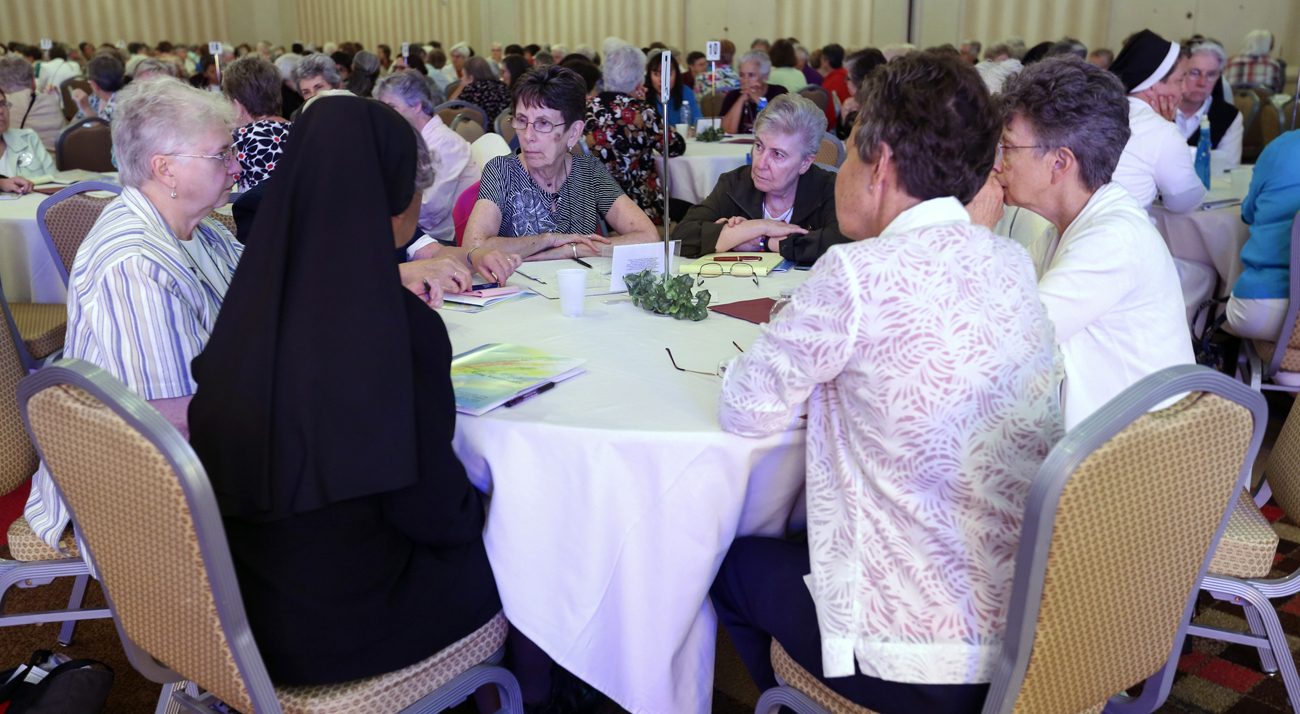 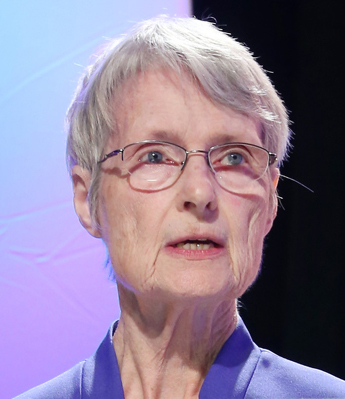 Sister Marcia Allen, a Sister of St. Joseph of Concordia, Kansas, and president of the Leadership Conference of Women Religious, delivers her address Aug. 10 to attendees at the LCWR assembly in Atlanta. (CNS photo/Michael Alexander, Georgia Bulletin)

ATLANTA (CNS) — Some 800 members of the Leadership Conference of Women Religious gathered in Atlanta for their annual assembly Aug. 9-12.

With the theme of “Embracing the Mystery: Living Transformation,” the sisters considered where God is moving in today’s world as they face smaller and graying communities.

“The whole assembly is about listening to the movements of God, not only individually, but collectively,” said Sister Annmarie Sanders, a member of of the Sisters, Servants of the Immaculate Heart of Mary, who is LCWR’s communications director.

In her presidential address Aug. 10, Sister Marcia Allen, of the Sisters of St. Joseph of Concordia, Kansas, called for “a new way of exercising hope” to envision a conference as the number of women religious serving the church continues to dwindle.

LCWR has approximately 1,350 members who are elected leaders of their religious orders, representing approximately 80 percent of the 49,000 Catholic sisters in the United States.

In an unsparing report to the organization’s members, she shared numbers about the drop in women and men who serve the church in religious congregations.

“In the belief that something will come of the ravages of collapse, hope is forged,” Sister Marcia said.

“We are keeping a brave face on it, but the truth is that the very thing that makes the conference possible is disappearing,” said the LCWR president.

In 1995, there were 107,000 members of religious congregations, according to the National Religious Retirement Office, which requests statistics from men’s and women’s congregations each year. Twenty years later, in 2015, there were 49,000 members, according to the retirement office, with the majority being 70 or older. By 2025, the number is projected to be around 29,000, again with a majority at least 70 years of age.

While some congregations don’t take part in the survey, Sister Marcia said the statistics show LCWR membership in nine years will not be larger, nor will most individual member congregations.

“Transformation is required. Remember, it is the new normal. We experience it all around us. We cannot escape it or pretend here in the conference that it is someone else’s problem,” she said.

This isn’t the first time women religious have reconsidered how they live their vowed lives, according to Sister Marcia. She described the movement of sisters across the Plains to the American West in the 19th century during which the sisters replaced the ways of living religious life that had developed in the East.

“The charisms hold, but we are challenged to something new,” she said. “Traditions were reinvented. Charism survived, purpose survived, but all the customs and homey expectations of the East were left behind.”

“In the face of necessity to survive and to serve in some meaningful way, a new life was, in fact, invented,” she said. “Many of us are the results of these reinventions.”

The ministries are vital in today’s world, she reminded the leaders of congregations from across the country. By painting the scene with several vignettes, she led the group in the sprawling ballroom “through an exercise of hope that expresses our faith.”

“Everything we have known about ourselves is but history at this point. It will turn out to be a hollow shell, a pyrrhic victory, unless we enter into the challenge before us,” she said. She then led listeners in an exercise, encouraging them to consider the “horizon of expectation” to envision what a smaller LCWR would look like and how it would serve the members.

“This is the same thing that must be done at home in local communities,” she said.

Looking to the horizon, aware of the current situation, she said, “I call this putting faith into the practice of hope.”

Listeners in the audience walked away with new perspectives but said many of the congregations have wrestled with this issue for a while.

Sister Dawn Gear, who serves on the leadership council of her congregation, the Grey Nuns of the Sacred Heart, said the message delivered to the leaders in Atlanta isn’t new, but it reinforces how congregations need to be aware of the situation and perhaps make hard decisions. Sister Dawn said the Grey Nuns recently sold their motherhouse outside Philadelphia to secure money to pay for care of aging sisters.

“It’s like a family. We need to think about these things,” said Sister Dawn, who was the founding principal of three Catholic schools in the Atlanta Archdiocese. “We didn’t start this yesterday. But it’s here.”

Sister Miriam Harney, a member of the Sisters of the Holy Faith, works in Los Angeles as a grief counselor. She told The Georgia Bulletin, Atlanta’s archdiocesan newspaper, that she appreciated the viewpoint of making decisions after community contemplation and listening to others’ wisdom.

Decisions are reinforced by faith when religious communities “look out into the horizon and see what’s on the periphery,” she said, and are not just focused on immediate concerns.

Sister Catherine Patten, the provincial superior for the Religious of the Sacred Heart of Mary, said contemplation used by the community as a process to come to decisions is becoming a more regular practice.

“It’s a particular way of viewing the world and doing leadership,” she said.