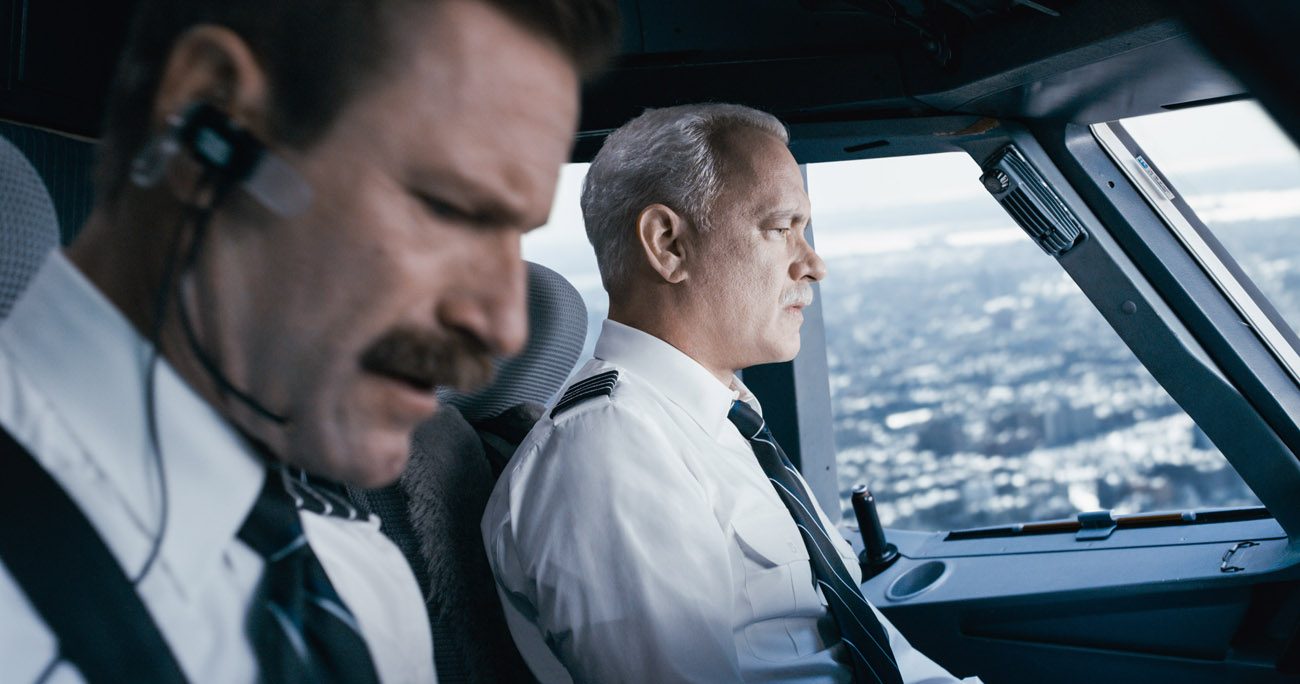 Arron Eckhart and Tom Hanks star in a scene from the movie "Sully."(CNS photo/Warner Bros.)

NEW YORK (CNS) — Putting Tom Hanks in the cockpit as everybody’s favorite aviator, US Airways Capt. Chesley Sullenberger, and bringing Clint Eastwood on board to direct him certainly sounds like a formula for high-flying success.

And so it proves with “Sully” (Warner Bros.), Eastwood’s satisfying adaptation of Sullenberger’s memoir (co-written with Jeffrey Zaslow) “Highest Duty: My Search for What Really Matters.”

Hanks is in his element conveying the understated heroism of the aviator whose 2009 feat in landing his plane on the Hudson River after it was crippled by a bird strike — and saving all 155 souls on board in the process — gained him instant fame.

Even as the public was embracing him as a hero, however, behind the scenes Sullenberger was being second-guessed by a team of federal investigators led by somberly suspicious Charles Porter (Mike O’Malley). In fact, the early stages of the National Transportation Safety Board’s inquiry seemed to suggest that the aircraft’s engines had not been totally disabled, as Sullenberger asserted, and that a much safer landing could have been made at any one of three nearby airports.

It’s these hidden events, together with Sullenberger’s torturous self-doubt, that lend the drama an element of suspense, despite the universal familiarity of its protagonist’s exploit. They also inspire Eastwood to maintain a surprisingly sober tone, the enjoyable flashes of wit in Todd Komarnicki’s script notwithstanding.

What emerges is the portrait of a morally deep-rooted and honorable man with a heartfelt concern for those in his charge. Other facets of his fine character are revealed by his appreciative attitude toward his co-pilot, Jeff Skiles (Aaron Eckhart), with whom he rapidly forms a friendship, and the mutually supportive love he shares with his wife, Lorrie (Laura Linney).

Despite some salty language in the dialogue, these ethical assets make “Sully” possibly acceptable for older adolescents.

The film contains potentially disturbing scenes of peril and destruction, at least one use each of profanity and the F-word as well as about a dozen crude or crass terms. The Catholic News Service classification is A-III — adults. The Motion Picture Association of America rating is PG-13 — parents strongly cautioned. Some material may be inappropriate for children under 13.

PREVIOUS: Film’s ‘synthetic human’ nothing more than an ’80s slasher

NEXT: Authors offer tips for strengthening kids’ faith and knowing them better