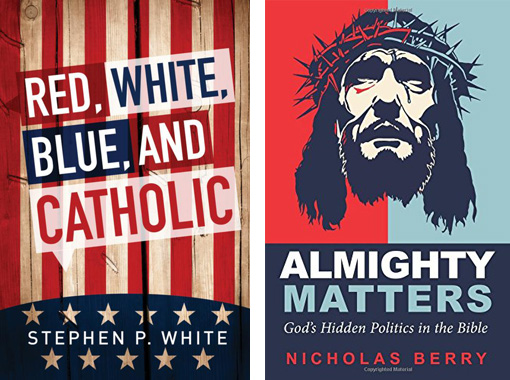 Stephen White is a fellow in Catholic studies at the Ethics and Public Policy Center in Washington. In “Red, White, Blue and Catholic” he challenges American Catholics to understand and to live out Catholic social teaching in its fullness in their daily lives and more.

In his foreword, he cites three very different Catholics who made a difference in their own times, and ours: St. Thomas More, Dorothy Day and Jerome Lejeune. These three, he notes, represent the vocation of all lay Catholics to “bring peace, joy, justice and truth” to all humanity through the “sanctification of the world” and support for the family, the unborn and the poor.”

Such efforts, of course, include but transcend politics. We are called to be active in society not just when we vote but every day and in every way of which we are capable. Good citizenship, he concludes, is a work above all of love.

In this book White does an admirable job of presenting the fullness of Catholic social teaching in all its aspects. In doing this he relies on key passages of the relevant documents of the popes from the beginning of the 20th century, through the Second Vatican Council and subsequent teachings of the popes, including Pope Francis’ “Laudato Si.'”

White presents his summary of Catholic social teaching in clear and compelling language. This book will be of help to individual Catholics interested in living out their faith at home and in society. It also is excellent as a reference for parish discussion groups and for ecumenical and interreligious groups as well, since it presents Catholic teaching in a way understandable by virtually all readers.

The presentation of Catholic social teaching is based upon what the author rightly calls its four permanent principles: the dignity of the human person, solidarity, subsidiarity and the common good. Making these principles real in society is, he states, primarily the work of the laity, who live in and for the world. He applies these principles to an understanding of contemporary American politics.

The second chapter deals with issues of family, marriage and the “cradle” of life, including such contentious issues in our society as abortion, capital punishment and euthanasia, clearly stating the Catholic position on each. Chapter Three engages larger issues of civil society, in which the goal is to work toward a system that balances the needs of the individual and the community, the haves and the have-nots, the able and the disabled, the poor and those who need health care. He argues that helping those in need helps society as a whole, the helpers no less than the helped.

White then turns to issues of our understanding of the economy, freedom and law, the relationship between the roles of government and the various groupings in society, urging readers to join with others to make a difference. We are all called, he concludes, not only to be good citizens but, indeed, saints. I highly recommend this book.

Looking at politics from a completely different angle is Nicholas Berry’s “Almighty Matters.” Berry has extensive experience in politics as a mayor, Democratic Party chairman in Virginia and Maryland and professor emeritus of politics at Ursinus College in Pennsylvania. He states his theme at the beginning as the “hidden political progression linking the Hebrew Bible with the Christian.” He defines biblical history as narrating the “establishment of the Hebrew state and its ultimate political failure. This failure establishes the link with the Christian Bible, which is the history of correcting that failure with a new political strategy.”

At the end of the book, while discussing St. Paul, he states that his theme is “that the political failure of Judea leads to the creation of the gentile conversion and political movement (Christianity) that is designed (by Jesus) to capture Rome,” stating in passing that in his view, St. Paul believes that “the salvation of Jews will come from Christians.”

This reviewer teaches Hebrew Scriptures on the graduate level and was involved in Catholic-Jewish dialogue for the U.S. Conference of Catholic Bishops and the Holy See for 30 years. I find Berry’s knowledge of the Bible and Christian-Jewish relations to be interesting, but flawed. The Hebrew Scriptures do narrate the political history of the Jewish people, though that is not their sole focus, as the author maintains.

The book is unconvincing in its argument that Jesus’ ministry was primarily political, consciously aimed at the conversion of the Roman Empire. Paul’s aim was to bring Christ not simply to a political empire, but to all humanity. Indeed, it was the confusion of politics and religion, many church historians would argue, that caused major moral failings in the history of Christianity.

A few examples of the author’s many errors of fact will illustrate my hesitation to recommend this book. Throughout, he defines Jews primarily as “biologically related.” This is not how Jews define themselves. Rather, they are a people, not a race, since one can become a Jew by conversion. And Jews do not see being chosen as God’s people as indicating any sort of superiority on their part, but rather as a challenge to them to live good lives, loving God and other humans, helping those in need, whoever they may be.

Berry severely foreshortens the biblical narrative, seeing in it only what he wants to see and ignoring its complexities. He conflates the two creation stories of Genesis, for example, into one story, ignoring the fact that they were set down centuries apart and reflect two very different sets of circumstances for the authors.

Berry is wrong to call the state of Israel a “theocracy” and he is wrong to equate the ancient Christian teaching of contempt with modern racial, genocidal anti-Semitism. Above all, he forgets that Jesus was a pious Jew of his time, who affirmed the Hebrew Bible as the only Bible that he knew.

Also of interest: “Talking Politics? What You Need to Know Before Opening Your Mouth” by Sheila Suess Kennedy. Georgetown University Press (Washington, 2016). 44 pp., $12.95.

Fisher is distinguished professor of theology at St. Leo University in Florida.

NEXT: ‘Deepwater Horizon’ isn’t easy to watch, but it’s worth it