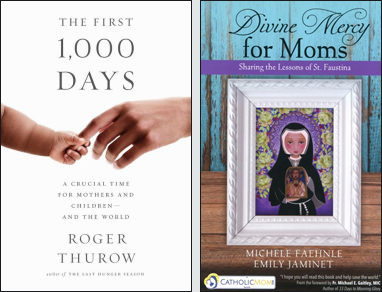 Two new books show that if mothers take care of their health and faith, the world can be a better place.

“Divine Mercy for Moms: Sharing the Lessons of St. Faustina” gives practical solutions for mothers to put into practice the Divine Mercy devotion. “The First 1,000 Days: A Crucial Time for Mothers and Children — And the World” analyzes efforts to stop malnutrition at a very personal level by documenting the lives of several mothers and children in the United States, India, Guatemala and Uganda.

Although different in their nature and intended audience, both books address the value of motherhood for the spiritual and physical health of the world.

The overwhelming effect that food has on the quality of a child’s entire life, as well as the good of society as a whole, is staggering. In particular, the first 1,000 days, starting in pregnancy, are especially important. But within this world of plenty, and sometimes regardless of the efforts made by organizations prioritizing the issue, malnutrition continues generation after generation.

Roger Thurow, a senior fellow at the Chicago Council on Global Affairs and former reporter for The Wall Street Journal, explores this concept by documenting the first 1,000 days of babies and their mothers in northern Uganda, the South Side of Chicago, the rural state of Uttar Pradesh in northern Indian and Guatemala’s western highlands. Their stories are hopeful, discouraging, poignant and illuminating. But they are not unique.

According to Thurow, “malnutrition is responsible for nearly half of all deaths of children under 5 worldwide and is a main culprit behind many adult chronic diseases.”

The pregnant women Thurow meets are taught how to make healthy food choices, starting with farming and cooking. In Uganda, women are encouraged to plant and eat sweet potatoes and high-iron beans to supplement an otherwise vitamin-deficient diet that contributes to malnutrition and disease. Unfortunately, access to clean water, sanitation and medical assistance often overrides efforts for good eating practices.

In Guatemala, women are encouraged to not only farm but to eat the country’s rich variety of produce. They are taught to diversify their diets laden with corn, tortillas or tamales and corn chips, “all washed down with Coke or Pepsi.” As Thurow notes, “Guatemala is a prime example of the paradox of globalization.” Farmers are not able to afford their own produce “and even if they could, had little taste of them,” according the author.

The South Side of Chicago has its own set of challenges, not the least of which is poverty and violence.

Here, Thurow observes a young teen pregnant with her first baby. She’s excited about making healthy food choices for her unborn daughter, but eating less expensive, easily accessed junk food is a tempting choice. But with the help of a Women and Infant Children, known as WIC, food market run by Catholic Charities, the young teen and mothers like her can take nutrition courses and safely shop for healthy foods while their children are supervised. Catholic Charities serves more than 120,000 people at these 16 operations around the city.

On to rural India, home to gender biases and cultural practices that often put mothers and babies at risk. Poor access to health care, delayed breastfeeding, vigorous newborn baby-washing and misogyny contribute to unintended health issues and infant death. Add in a lack of access to or unwillingness to use bathrooms, and disease runs rampant.

Thurow does an excellent job highlighting unique circumstances with his personal stories while avoiding gross generalizations. He also does not avoid pointing out that certain cultural practices must change to improve the health of women and children. And, he says, the development community still is trying to better understand that coordinated programs that address multifaceted issues will have a broader impact improving the lives of children.

Now that the physical health of mothers (and babies) has been addressed, the spiritual lives of mothers will be nourished with the help of “Divine Mercy for Moms.”

Authors Michele Faehnle and Emily Jaminet, who between them have 11 children, know that living out Catholicism through the corporal and spiritual works of mercy is daunting but achievable. And they lead mothers by the hand with obtainable, realistic and practical ways to live as Catholic mothers.

Sure the works of mercy take time and thought, but the authors remind us, “The Lord values our giving more when we make a sacrifice to accomplish it as did the widow with her mite. Jesus said she gave more than anyone because she gave from her poverty, not from her wealth.” This is just one of many ways in which the authors encourage the mothers to pray — and act.

Each chapter begins with a quote from the “Diary of St. Maria Faustina Kowalska: Divine Mercy in My Soul” and an explanation followed by suggestions for action and reflection. St. Faustina was a young Polish nun who experienced visions of Jesus. She wrote the revelations in her diary that included ways to pray and act. The Divine Mercy image, depicted with the words “Jesus, I trust in you,” comes from these revelations.

As Marian Father Michael E. Gaitley writes in the forward to “Divine Mercy for Moms,” “I hope you read this book and help save the world. We need you, Catholic moms.” And as Thurow shows throughout “The First 1,000 Days,” the world’s moms might be able to start to change the world with healthy food choices, but they need help.