Memoir of Notre Dame priest has insights but not definitive biography 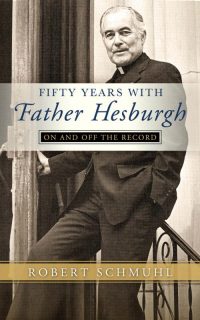 From the 1950s through the 1980s, Father Theodore Hesburgh was one of the most famous priests in the United States and, probably, the busiest. Robert Schmuhl, the author of “Fifty Years With Father Hesburgh,” was a student of Father Hesburgh’s as an undergraduate at Notre Dame and they continued to be friends until the priest’s death in 2014.

Schmuhl interviewed his mentor several times and these interviews are largely the source of this short “biographical memoir,” a term Schmuhl uses to delineate between a memoir that would be about himself and a book about Father Hesburgh through his personal experience.

Whoever writes the definitive cradle-to-coffin biography of Father Hesburgh will face a monumental task. He served as the president of the University of Notre Dame for 35 years, from 1952 to 1987, the longest tenure of any American university president. Father Hesburgh was on 17 governmental commissions, serving presidents from Dwight Eisenhower to Jimmy Carter. He served most prominently on the U.S. Commission on Civil Rights; he was appointed to it by Eisenhower and worked on it until President Richard Nixon forced him to resign in 1972. He also served on commissions on atomic power, immigration, science and technology and other issues.

But for Father Hesburgh, Notre Dame was the important institution he served. He first went there as an undergraduate, but earned his bachelor’s degree in philosophy from the Gregorian University in Rome and was subsequently ordained a priest. He received his doctorate from The Catholic University of America in Washington and returned to Notre Dame in 1945 to teach religion. Three years later, he was appointed vice president of Notre Dame and four years later, at the age of 35, he became its president.

While Notre Dame enjoyed a reputation as an athletic powerhouse, especially in football, before Father Hesburgh became president, the priest focused on raising its academic standards, attracting distinguished scholars as faculty and growing the endowment from under $10 million to over $300 million.

Father Hesburgh viewed moving the governance of the university from the Congregation of Holy Cross to one led by laypeople and the admitting of women in 1972 as his two greatest accomplishments. By the time he retired, most Catholic universities had followed Notre Dame’s example and moved to lay leadership and had admitted women as students.

The priest saw the years of the war in Vietnam as the most difficult of his long tenure. While he was fiercely dedicated to the principle of free speech, he did not view the disruption of classes or the taking over of buildings as part of that right. He created “the 15-minute rule,” which said that, after the university had requested a demonstration be stopped, students had 15 minutes to stop their demonstration before penalties would be handed down. Students who flouted the rule could be suspended or expelled.

Father Hesburgh was asked many times to run for public office, but he always declined as he said it would create a conflict with his serving the church as a priest. He saw the priesthood as his highest vocation and celebrated Mass every day until he died.

His one vice seems to have been an addiction to smoking cigars, which he continued to do even after Notre Dame had forbidden smoking on its campus. Father Hesburgh thought of smoking not only as a pleasure, but as his right, and he resented what he saw as an infringement on his personal freedom. Reluctantly, Notre Dame gave him a room in which he could continue to enjoy his cigars.

“Fifty Years With Father Hesburgh” is a short book, but not a quick read. Schmuhl’s admiration for Father Hesburgh is limitless, as one might expect from a friend of many years, but the book just seems a catalog of commissions and issues and achievements and not the story of a life. But as Schmuhl states, he is not writing a biography, so we will have to wait for the whole story to be told. And what a story it will be.

Yearley is a graduate of the Ecumenical Institute at St. Mary’s Seminary and University in Baltimore.