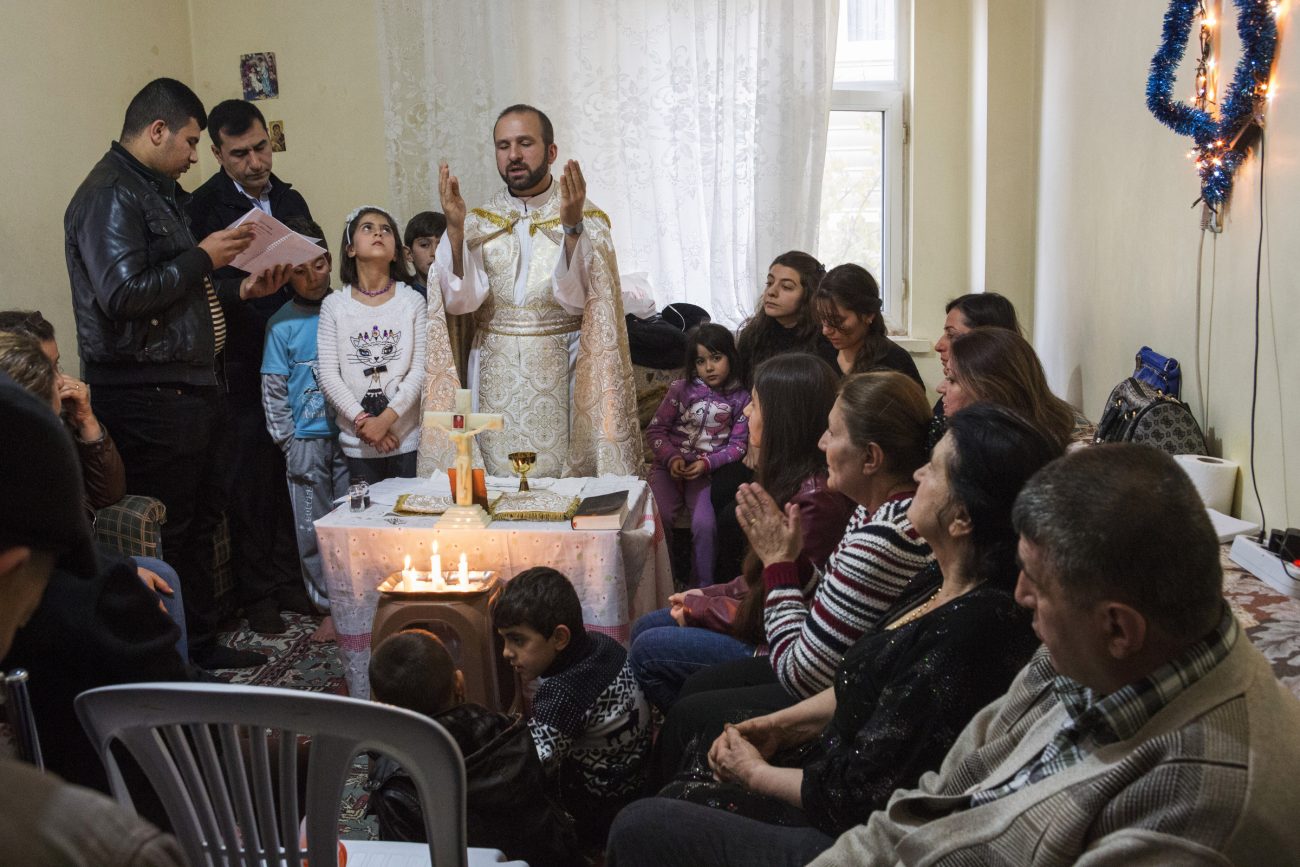 ISTANBUL (CNS) — Holding a golden chalice and paten with a single hand, Father Remzi Diril slowly moved from one person to another, distributing the Eucharist. He reached for a consecrated host, dipped it in the chalice, and gave it to a woman in her 40s, whose head was covered with a veil.

With chants in the background and incense filling the air, the moment inspired reverence. Yet the Mass was not in a church; it was in an apartment in Kirsehir, a small, conservative city in the heart of Turkey, a Muslim-majority country.

Being the only Chaldean Catholic priest in charge of pastoral work in Turkey, Father Adday, as he is known, has become a true itinerant priest, a road warrior who, each year, logs thousands of miles tending his flock, the community of Iraqi Christian refugees in Turkey. Their exact number is unknown, but it is estimated to be 40,000.

Since he was ordained two years ago, Father Adday, 34, has baptized more than 200 children, married more than 20 couples and administered the last rites to more than 30 people. He also is on his fifth suitcase.

“So far this year we have celebrated first Communion for more than 100 children. And last year it was more than 150,” he said.

On a recent hourlong flight from his base in Istanbul to Nevsehir, a city in central Turkey, Father Adday sat comfortably in the emergency exit row of a plane from a low-cost airline.

“There is more legroom here,” Father Adday said; his eyes locked on the airline’s magazine crossword.

The trip’s cost is an important factor considering that the church is not able to reimburse his expenses. That only happens when there is an official function or religious festival. More often it is the priest, or the families he visits, who pay for the trip.

“It is easier for them to help me with my travel expenses than to pay, for a family of 10, for a trip to Istanbul,” Father Adday explained. 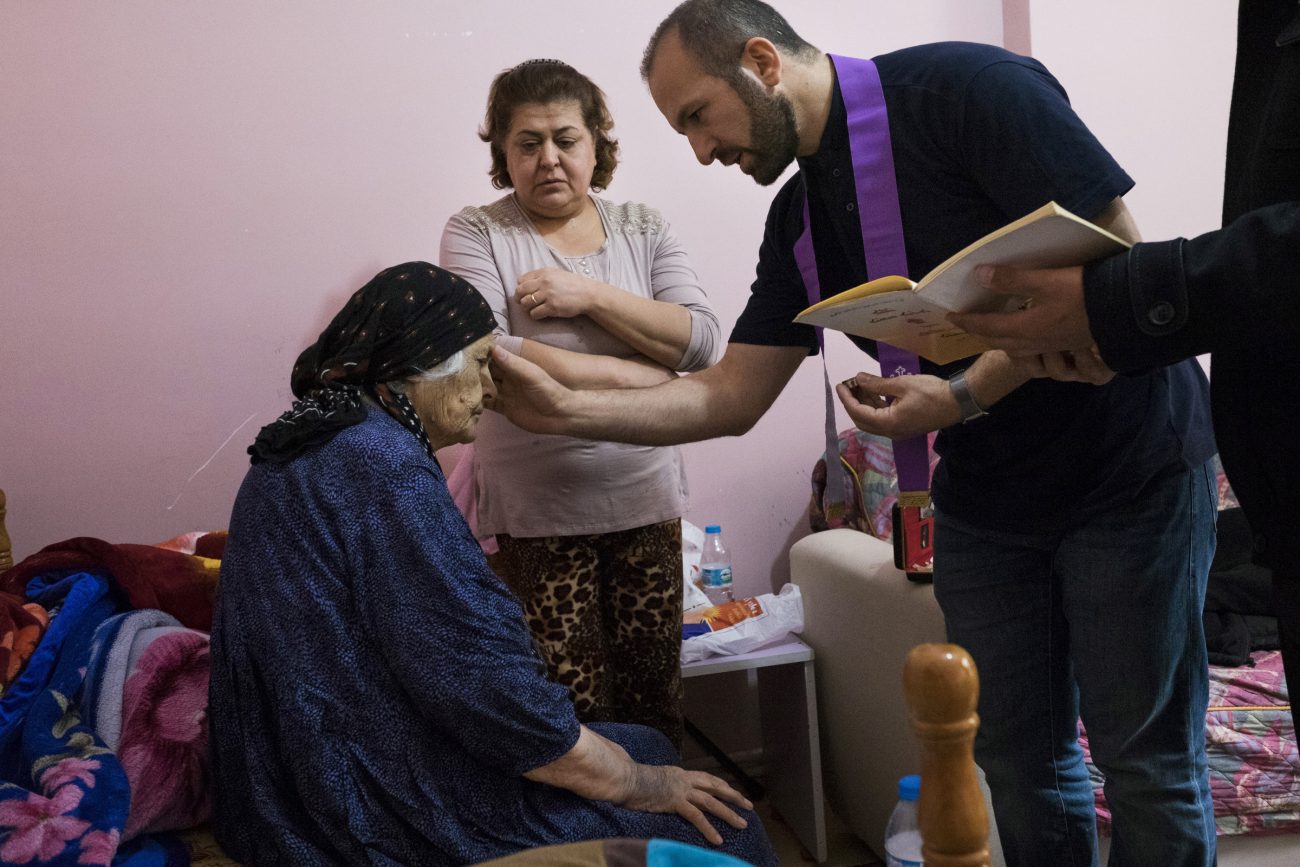 Once he arrives at his destination, the priest relies on a support network who connects him to the local community of Iraqi Christians.

From Nevsehir Father Adday took a 60-mile bus ride to Kirsehir, where he met Adnan Barbar and his wife, Faten Somo. This was the priest’s eight time in the city.

“This is my family in Kirsehir. In every city, I have a family. Sometimes more than one,” he said.

The couple acts as Father Adday’s local liaison. After welcoming the priest to their apartment with the customary tea and sweets, Barbar and Somo got on their cellphones. They were familiar with the city’s 225 Iraqi Christian families, and they were assembling the priest’s itinerary.

This area of Turkey is a pivotal place in the history of Christianity. Early Christians came here escaping persecution in the Roman Empire. Remains of the churches they built can still be visited today. However, no Catholic churches function in this part of the country. And when Father Adday visits, Mass is celebrated in homes, as the early Christians also did.

Celebrating Mass in a public hall would allow more people to attend, but renting a hall costs about $900, which can be better spent traveling to visit more families.

On average, 10 families are invited to each Mass, and 30 people attend. The smaller Mass allows for an experience different from the one felt in a church.

“A Mass in a house is more like a family. Father and children sharing the glory of God,” Father Adday said. “I would say it is like watching a film in a movie theater versus watching it at home with your family.”

After this Mass, the priest visited Marta Kiryakos, a woman from Bartella, Iraq, suffering from cancer. Her daughter, Nadira, opened the door of the bedroom, crying, worried about her mother’s health. Kiryakos’ condition is delicate, and the priest prayed for several minutes as he anointed her temples and forehead with oils.

Many of the people Father Adday visits have spent several years in Turkey, waiting for an answer to their asylum applications to countries such as Australia, Canada and the United States. The process is long, and this time in limbo has caused many people physical and psychological problems.

“People need spiritual help. They need a priest. They want the church with them. I can’t give them material things, but I can give them my time and give them hope,” the priest said.

Father Adday and the Iraqi refugees he serves are Assyrian, an ethnic group from the Middle East. Their language — Assyrian — is related to the language Jesus spoke, Aramaic.

But their connection is not only the ethnic group and language. When Father Adday was a child, his village in southeast Turkey was burned during the Kurdish-Turkish conflict. He and his family had to move to Istanbul.

That is another reason that keeps Father Adday on the road with the people.

“When you leave your sheep in the mountain, you don’t know what will happen to them. But when you are with them it is different. You can show them where the water is; where there is a good place to stay. They are like children waiting for their father,” he said.

After two intense days and one night in Kirsehir, Father Adday prepared to return to Istanbul. He celebrated five Masses and visited multiple families, but he said he was not tired.

“I hope that my visits allow them to become more spiritual and in touch with the church, and to refresh their belief in Jesus. Every Christian needs to refresh his spiritual life,” he said.

“I also hope to give them hope and remind them … that God makes miracles, and for that they need to believe. I tell them let God do the working for you. He is our Father and he wants the best for you,” Father Adday said.

PREVIOUS: Pope indicates he will travel to Ireland in 2018