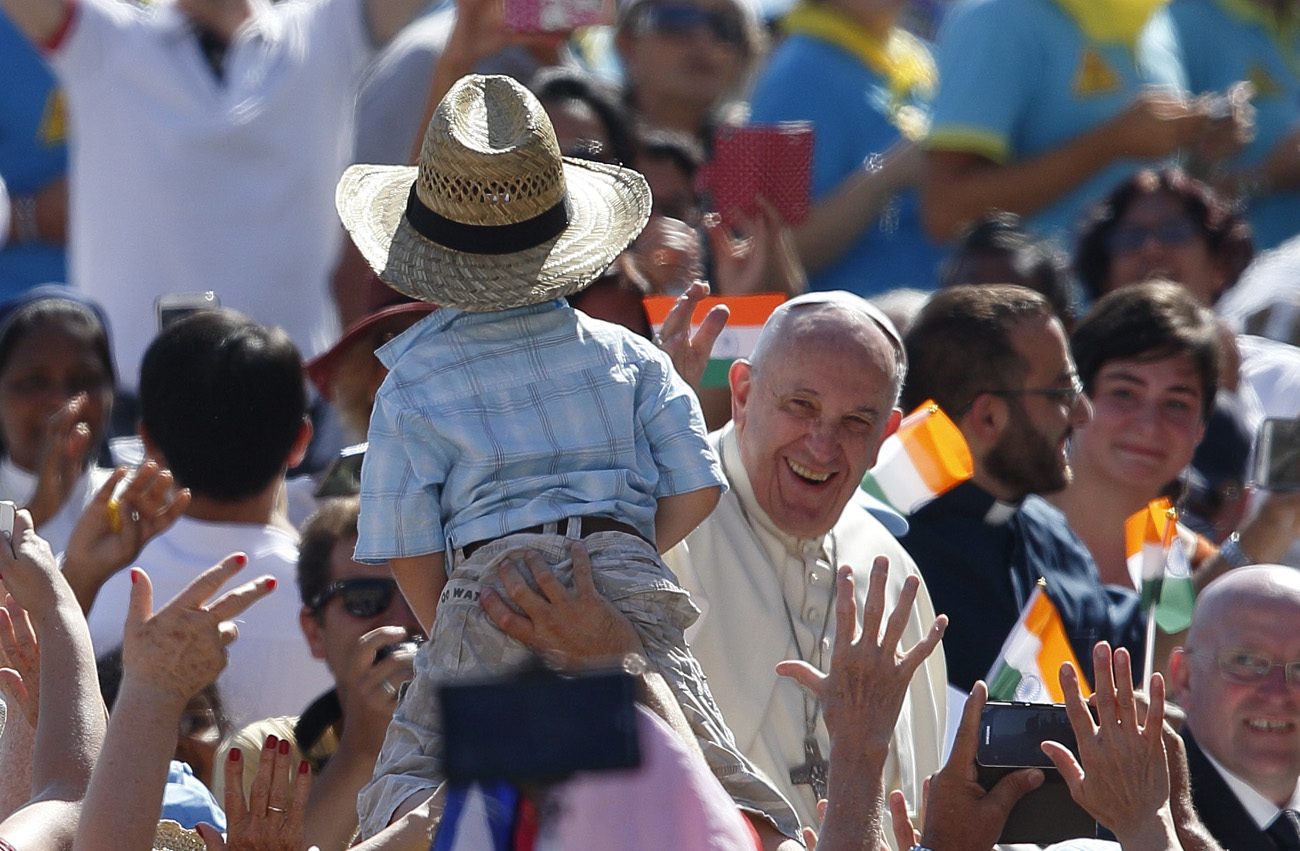 Pope Francis waves to a boy in St. Peter's Square Sept. 3. "The people of God have a great nose" for sniffing out priests who serve the god of money more than God the father, Pope Francis told the priests Nov. 18. (CNS photo/Paul Haring).

VATICAN CITY (CNS) — Catholics will forgive their priests for almost any weakness, but not for an exaggerated attachment to money or for mistreating parishioners, Pope Francis told 160 priests who work in Vatican nunciatures around the world.

“The people of God have a great nose” for sniffing out priests who serve the god of money more than God the father, he told the priests Nov. 18.

Celebrating Mass with them in the chapel of the Domus Sanctae Marthae, Pope Francis focused on the day’s Gospel reading, which was St. Luke’s account of Jesus throwing the money-changers out of the temple.

In the reading, Jesus accuses the merchants of turning the Lord’s house into a “den of thieves.”

“A heart attached to money is an idolatrous heart,” he said.

A church, like the temple, is supposed to be a house of prayer, a place to encounter the God of love, the pope said. But “the lord-money” constantly tries to enter even there.

The merchants and money-changers did not just make themselves at home in the temple, Pope Francis said. “Who rented them places, huh? The priests. The priests rented them and money entered” into the house of God.

The devil tempts people, including priests, to make money an idol, leading to a life that is “without the happiness, without the joy of serving the true Lord who is the only one who can give us true joy,” the pope said.

“It’s a personal choice,” he told the priests. “What is your attitude toward money? Are you attached to money?”

The Catholic faithful, he said, are pretty sharp “in canonizing as well as condemning” their priests. “They will forgive many weaknesses, many of their priests’ sins. But there are two they cannot forgive: an attachment to money — that they cannot forgive — and the mistreatment of people, which is something the people of God cannot digest.”

With other weaknesses, he said, people will say, “‘Yes, but he is not well’ or ‘poor man, he’s lonely.’ They try to justify” his behavior.

Pope Francis told the nunciature staff members that “it is sad to see a priest arrive at the end of his life — in agony, in a coma — and his nephews and nieces are gathered, looking around to see what they can take.”

Priests should have “sufficient money, that of an honest worker, and sufficient savings like an honest worker would have,” but not wealth. He prayed that God would give him and all priests the grace of being content with what is enough “and not seek more.”