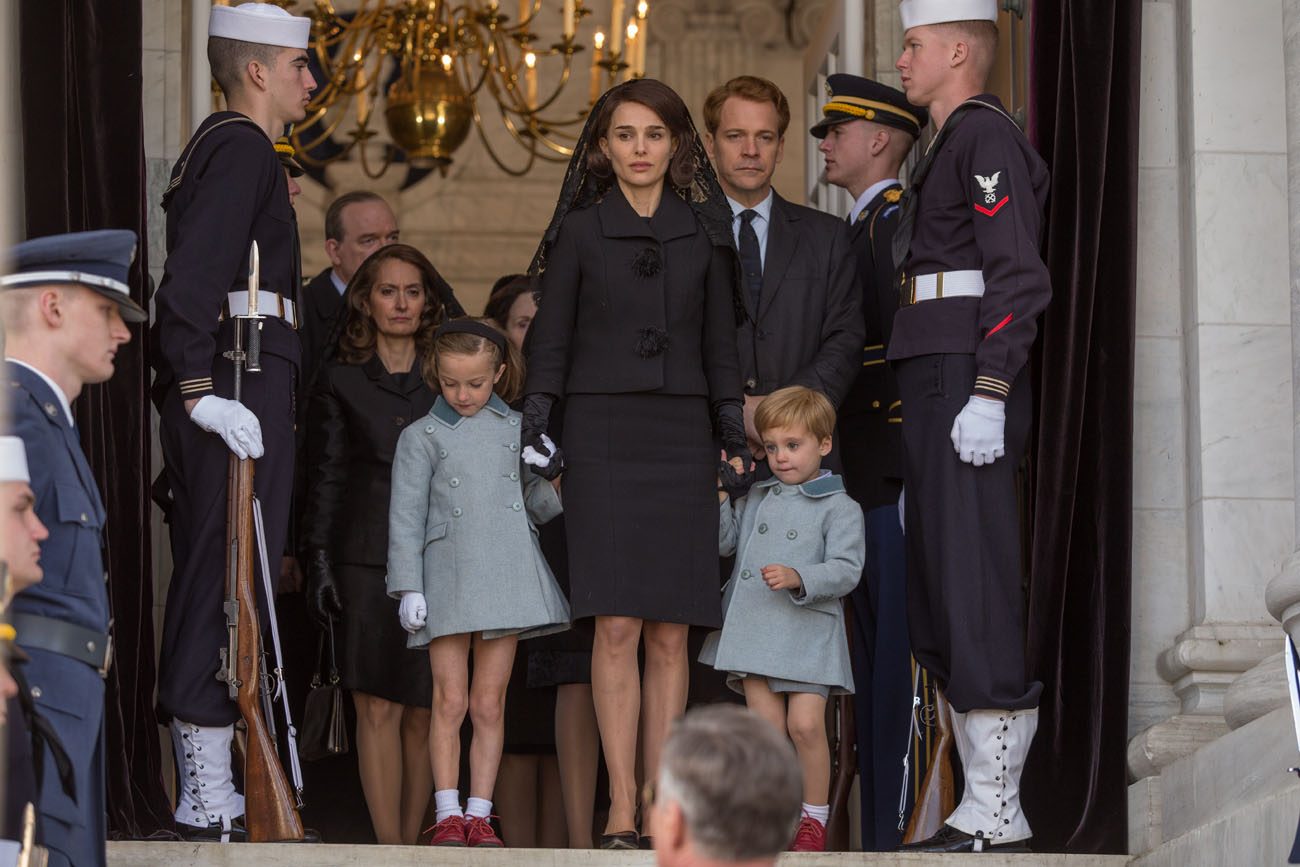 Natalie Portman, center, stars in a scene from the movie "Jackie." (CNS photo/Fox)

NEW YORK (CNS) — “Jackie” (Fox Searchlight) is more of a passionate meditation on the nature of a first lady’s fame than a historical drama about Jacqueline Kennedy in the weeks following the 1963 assassination of her husband.

So the mesmerizing performance by Natalie Portman in the title role — it’s one long monologue, really — can’t be measured against other biopics of presidents or their wives.

Director Pablo Larrain and screenwriter Noah Oppenheim focus instead on how Jackie created her own legend by virtually dictating a story about her husband’s last days to reporter and biographer Theodore H. White (Billy Crudup) for Life magazine. They strengthen their drama with an expertly created mix of archival footage into which Portman is inserted.

Jackie, shown to be arch and brittle, has complete control over the article, and even commands White not to mention that she smokes. It being the early 1960s, everyone else is smoking, of course.

This feature in Life launched the Camelot legend of the Kennedy years, since Jackie mentioned that she and the president (Caspar Phillipson) used to enjoy listening to the eponymous Lerner and Loewe Broadway musical’s cast album. She knew, in other words, something about myth-making — even in the depths of her grief.

That’s also where the film goes off the rails after its first hour.

Jackie is shown not listening to the record with the president, but rather alone, as she wanders in despair through the stately second-floor rooms of the White House from which she’ll shortly depart.

As the title song of “Camelot” begins, Richard Burton, the original King Arthur, burbles, “It’s true! It’s true!” Discerning history buffs may be tempted to shout back at the screen, “It’s not! It’s not!”

Soon afterward, the president’s brother, Bobby (Peter Sarsgaard), announces, “I think you need to talk to a priest.” This leads to a series of conversations about anger and suicide with a scruffy elderly cleric (John Hurt) billed only as the Priest.

Hurt’s character is an amalgam of at least two real-life clergymen, Irish-born Vincentian Father Joseph Leonard, whom Jackie knew from before she was married, and Jesuit Father Richard McSorley, who taught at Georgetown University. Bishop Philip Hannan, the future archbishop of New Orleans, who was then an auxiliary bishop of the Archdiocese of Washington, is also known to have counseled the grieving widow.

Jackie is said to have asked Father McSorley “if God would separate her from her husband if she killed herself,” after which he reiterated to her the church’s teaching against suicide.

Although these are quite typical exchanges to have while wrestling with grief, Catholic viewers may wonder whether they’re the result of breaking the seal of confession. It turns out they’re not, although Father McSorley was widely criticized years later for revealing the contents of their talks.

The dramatic thread of the film concerns Jackie’s demand that everyone march in a procession from the White House to the Cathedral of St. Matthew the Apostle for the funeral. Since this eight-block walk would include foreign dignitaries, her request caused hours of frantic arguments about security concerns. Yet Jackie prevailed, and the cortege is now recalled for its calm, fearless dignity.

“Jackie” may fall short as history. But its attention to detail and its willingness to show grief honestly will make it appealing for many adults.

The film contains an explicit, gory portrayal of assassination and at least one use of rough language. The Catholic News Service classification is A-III — adults. The Motion Picture Association of America rating is R — restricted. Under 17 requires accompanying parent or adult guardian.

NEXT: One book offers exhaustive study of rosary, another adds mysteries