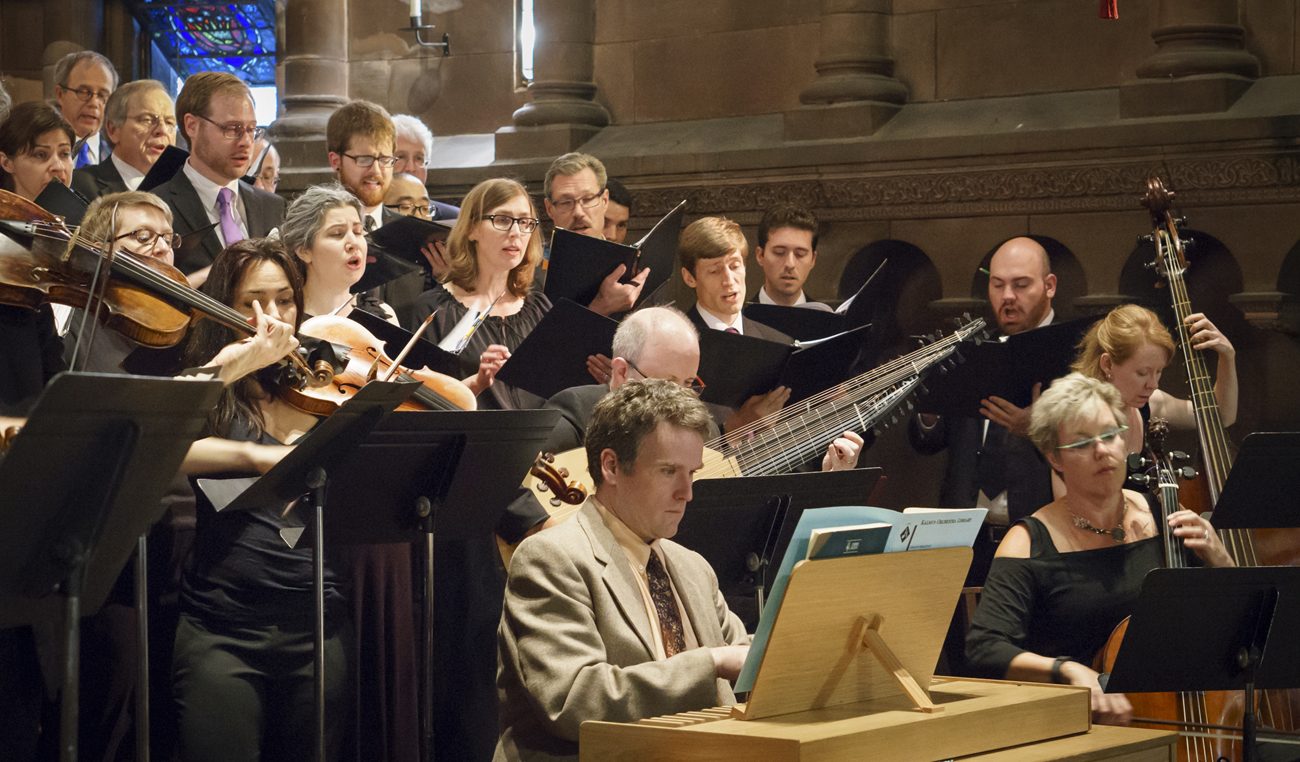 Choral Arts Philadelphia and the Philadelphia Bach Collegium perform in May 2015 at St. Clement's Church. (Photo by Sharon Torello)

What are you doing New Year’s Eve? Choral Arts Philadelphia, accompanied by the Philadelphia Bach Collegium, present a unique way to ring in the new year Philly style with a rare performance of Johann Sebastian Bach’s Weihnachts-Oratorium BWV 248 (“Christmas Oratorio”).

The late afternoon festive concert will be held Saturday, Dec. 31 from 4 to 8 p.m. at the Philadelphia Episcopal Cathedral, 38th and Chestnut Streets in Philadelphia.

The six-part “Christmas Oratorio” begins at 4 p.m. with Parts I-III, breaks for a one-hour intermission at 5:30 during which patrons may purchase dinner from such food trucks as Wheely Wheely Good (pan-Asian), The Grill Cheese (sandwiches) and All of Sudden Desserts.

The concert resumes at 6:30 with Parts IV-VI until the conclusion at 8 p.m.

Bach’s “Christmas Oratorio,” compiled and premiered in Leipzig during Christmastide 1734, is a natural addition to Choral Arts Philadelphia’s current season performance of all Bach’s surviving works.

The “Oratorio” is a collection of six cantatas, forming one of Bach’s lesser known yet monumental works, which present a narrative of the Christmas story as told in the Gospels of St. Matthew, St. Luke and St. John. It ranks along with Bach’s two great Passions compositions, St. John and St. Matthew, in drama, inventiveness and beauty, according to Choral Arts Artistic Director Matthew Glandorf.

It is rarely heard complete, at least in the United States, due to many programming challenges for any musical organization. Since the six cantatas of the “Oratorio” were originally performed one per day, the instrumentation is different for each one of them.

Additionally, the work has particularly virtuosic choral and solo writing, making the piece inaccessible to many choirs.

“Although it would be a challenge for us trying to perform it every year,” Glandorf said, “I like the idea that it could become a regular piece of repertoire for Choral Arts.”

All solo and duet parts will be sung by the professional core members of Choral Arts, with tenor James Reese as Evangelist. Choral Arts Philadelphia is premier 40-voice chamber chorus consisting of a core of professional singers mixed with highly experienced volunteer members. Philadelphia Bach Collegium is a professional instrumental ensemble of period instruments.

“I find the idea of a New Year’s Eve concert, post-Christmas Day, a lovely way to ‘begin afresh,’” Glandorf said. “It is a real pleasure to offer an event that can defy traditional patterns and find a foothold in our city’s diverse cultural landscape.”