Study: Parents just as attached to devices as their kids are

WASHINGTON (CNS) — For adults complaining about America’s youth being saturated in media usage, it appears the apple hasn’t fallen far from the iPad.

Parents spend more than nine hours a day with screen media, and the vast majority of that time is spent with personal screen media, according to a study issued Dec. 6 by Common Sense Media, a San Francisco-based organization that has long been tracking children’s media usage. 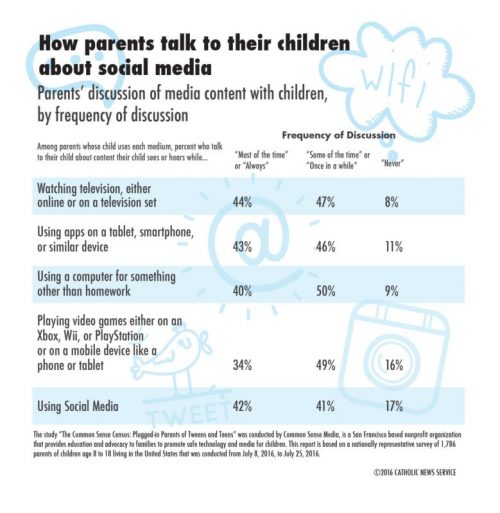 A new study looks at how parents personally engaged with various media technologies in the home environment and also how they monitor and perceive their children’s media use. (CNS graphic/Liz Agbey)

Even so, according to the study, 78 percent of parents believe they are good media and technology role models for their children.

Common Sense said it is possible for people — parents and children alike — to use more than one form of media simultaneously, such as listening to music while engaging in social media. Still, some groups’ habits skew the survey’s results.

The notion of a nation of workers chained to their computer screens was dispelled in the study, which showed that only 1:39 was spent on work screen media compared to 7:43 on personal screen media.

The most-used device by parents was the television, DVD player and/or video, for an average of 3:17. Groups watching TV for more than four hours were blacks, Hispanics, those whose education stopped at high school or earlier, and those making under $35,000 a year. 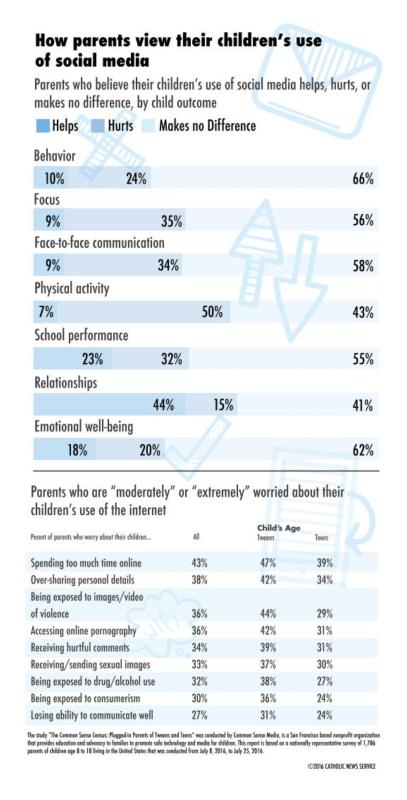 Fifty-eight percent of parents said they listen to music while working, 48 percent sent text messages, 38 percent used social media, and 33 percent watched TV, the study said, while 63 percent reported their tweens and teens have their own cellphones, and 51 percent of them have their own tablet.

While more than one-third of parents reported being “moderately” or “extremely” worried about their children’s internet use in a variety of ways, parents of “tweens” — defined in the study as children ages 8-12 — were consistently more worried than parents of teens.

Forty-three percent of all parents say their kids spend too much time on media, the Common Sense Media study said.

More than two-thirds, or 67 percent, of parents said monitoring their children’s media use is more important than respecting their privacy.

Hispanic parents, the study said, tend to be more aware and more concerned, and they manage their children’s media use more than other parents — 60 percent for Hispanics as opposed to 37 percent for whites and 33 percent for blacks.

“A majority of parents do report, however, that children are not allowed to use devices during family meals (78 percent) or at bedtime (63 percent),” the study said.

Parent media activities covered in the survey included watching TV, movies and videos, playing video games, listening to music, using social media, reading either print or electronic books, and using digital devices for other purposes, such as browsing websites and playing games. They also were asked about computer, smartphone and tablet use for work purposes.

The media devices or technologies covered in the survey include video game consoles, handheld video game players, TV sets, desktop and laptop computers, tablets, smartphones, cellphones that are not smartphones, and e-readers. The survey, which can be found at http://tinyurl.com/jp3ywwn, also asked about print reading materials, such as books, newspapers and magazines.

NEXT: Director Martin Scorsese talks about his home in the Catholic faith