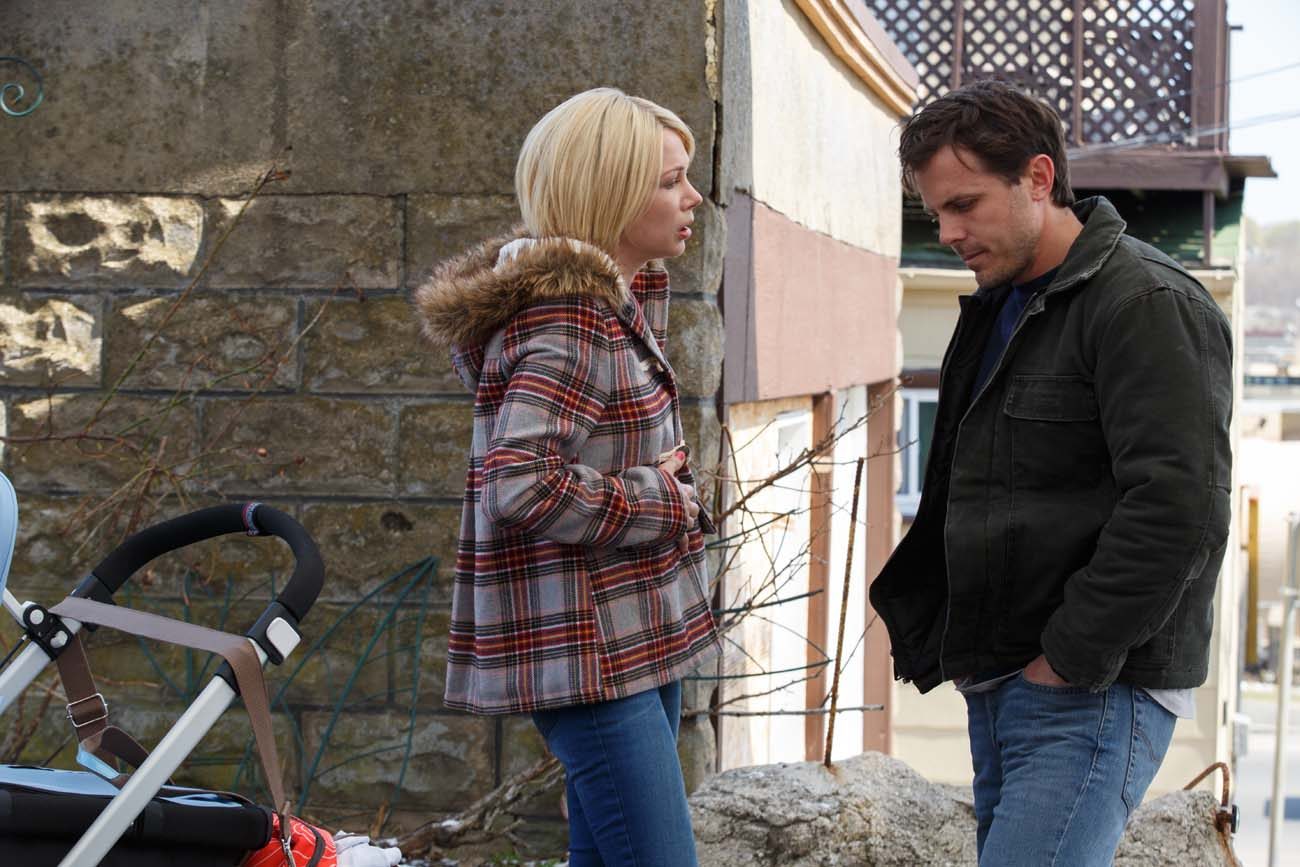 Michelle Williams and Casey Affleck star in a scene from the movie "Manchester by the Sea." (CNS photo/Roadside)

Affleck’s character, Lee Chandler, is a janitor in several Boston-area apartment buildings. A terse yet proficient handyman, he has little interest in conversing with tenants or in social interaction of any kind. He seems numbed, almost to the point of appearing robotic. Even when he gets drunk and picks fights with random bar patrons, his belligerence is mechanical. Evidently, something terrible has prompted Lee to wall himself off from the world and other people.

The cause of his suffering isn’t revealed until roughly halfway through this gently paced film, well after Lee is summoned to Manchester, his hometown on the coast of Massachusetts, where his brother, Joe (Kyle Chandler), the owner of a fishing boat, has succumbed to a heart attack.

Joe’s poor health was not a surprise, but Lee is startled to learn his brother has named him the guardian of his 15-year-old son Patrick (Lucas Hedges).

Although Lee’s bond with Joe and Patrick has withstood his absence and the tragedy that precipitated it, he’s reluctant to take responsibility for raising his nephew, not least because he dreads living in Manchester where everybody knows what transpired. Nevertheless, he takes his duty seriously and tries to do right by Patrick — a popular, outgoing teen who plays hockey for his school and lead guitar in a rock ‘n’ roll band, in addition to juggling two girlfriends.

Employing a flashback structure, writer-director Lonergan (“You Can Count On Me”) gradually doles out plot points and relevant information. This narrative technique is extremely effective at triggering wrenching emotional responses; and Lonergan’s screenplay is flecked with dark humor, along with flashes of compassion and understanding.

Against a lovely backdrop provided by the Cape Ann region of Massachusetts, a carefully manicured yet naturalistic portrait of a shattered individual emerges.

Lonergan also is able to elicit tremendous performances. As Patrick, Hedges holds his own opposite Affleck, who plumbs Lee’s anguish without being showy or ever appearing to strain. Patrick’s openness and youthful vitality are the perfect counterpoint to his uncle’s hollowness and lethargy. The pathos Michelle Williams brings to the role of Lee’s ex-wife, Randi, puts Lee’s inability to express his feelings in stark relief.

“Manchester by the Sea” is suitable for adult moviegoers, many of whom will be put off by the amount of bad language and the movie’s frank treatment of Patrick’s love life. That said, the tone is never nasty, sordid or depraved.

Lee’s failure to change or grow to an appreciable extent is a more interesting hurdle. Expecting his guardianship of Patrick to be a panacea is unrealistic. But the recognition that Lee ends up only slightly better off then when we first meet him leaves a slightly bitter aftertaste. He remains incapacitated by guilt and an eviscerating sense of loss. When he declares, “I can’t beat it,” you believe him. For now at least, redemption is not in the cards.

This would be easier to accept, and the movie would be less wintry, if Lee took steps to improve his situation by, for instance, confronting his reliance on alcohol or by seeking counseling. There’s something masochistic about how he continues to punish himself for making one, albeit grave, mistake. It means the healing process cannot begin.

The movie’s major aesthetic deficiency parallels this aspect of Lee’s psychology. Rather than create an inspirational metamorphosis for Lee, and thus a more optimistic sense of closure for the audience, Lonergan lets the story peter out and the dramatic urgency wane. As it becomes clear Lee’s struggle to recover is just beginning, the picturesque shots of Manchester’s harbor and environs that Lonergan inserts between scenes strike one as quaint distractions from the profound human issues being raised.

Eschewing an implausibly upbeat ending is not the problem. It’s the impression that Lonergan, daunted by the choices facing his characters, has gone into avoidance mode.

NEXT: ‘Hidden Figures’ reveals the courage of women in space race