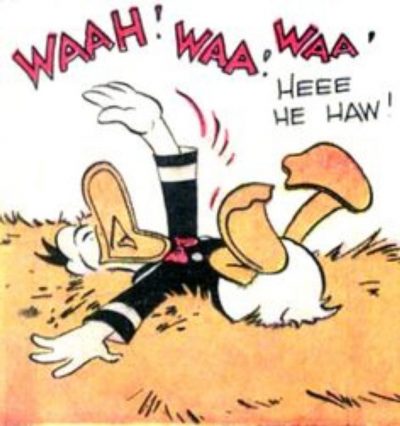 This is an image by legendary Disney comic book artist Carl Barks. (CNS)

NEW YORK (CNS) — Parents looking to lure their youngsters away from digital devices and toward material that might foster reading and imagination should consider the work of legendary Disney comic book artist Carl Barks. In fact, Mom and Dad may enjoy Barks’ work as much as their kids.

For three decades, beginning in the mid-1940s, Barks (1901-2000) created Donald Duck comic books for Western Publishing. For the past several years, Fantagraphics has been republishing Barks’ classics in beautiful new editions.

These hardbound volumes contain all the original comics, including their covers, as well as commentary by comic-book historians. Their content is, of course, suitable for all — and they’re especially fun for youngsters learning to read.

Surveying Barks’ work in issues like “Lost in the Andes,” “The Terror of the Beagle Boys,” or in the latest release, “The Ghost Sheriff of Last Gasp,” it becomes evident why he was one of the first three artists inducted into the Will Eisner Hall of Fame, together with legendary Jack Kirby and the hall’s namesake. Eisner called Barks “the Hans Christian Andersen of comic books.”

Barks’ texts work on two levels. The first is simply as delightful comic strips. Barks was a master of sequential art, and the characters he created to interact with Donald — miserly moneybags Scrooge McDuck and the robbing Beagle Boys, among others — are constantly getting into situations that pay off in slapstick poses and kinetic action.

Whether it’s longer 10-page stories about hunting for gold or tangling with a sea monster, or single-page gags about baseball, Donald’s adventures are always alive with color and motion. Yet, as the commentary that comes at the end of each volume notes, Barks also used his Donald Duck strips for personal and social commentary.

Barks was born in 1901 on a farm in Oregon. His family moved frequently as they tried to make a living from stock-breeding or through selling produce.

After studying the work of master cartoonists such as Winsor McCay and completing four lessons from an art correspondence course, Barks began his professional life. He made his way to Disney Studios in 1935.

Over the course of his lifetime, Barks held many different jobs and often struggled financially. His stories sometimes set Donald against obstacles reminiscent of those the artist himself faced.

In “Terror of the Beagle Boys,” for example, Donald is exhausted from overwork when he is pressed into service by his Uncle Scrooge to defend Scrooge’s pile of money from the nefarious bandits of the title. As genre scholar Jared Gardner writes in the notes, “this is a tale not about the Beagle Boys but about terror and worry.” The story reflects the anxiety Barks felt as a result of his second wife Clara’s mounting medical expenses.

For all the serious subtext underlying them though, these wonderful stories can be appreciated straightforwardly and exclusively for their celebration of life in all its craziness, color and fun.

NEXT: Readers offered journey through the theological life of the retired pope