With keen sense of purpose, a dog keeps coming back to his people 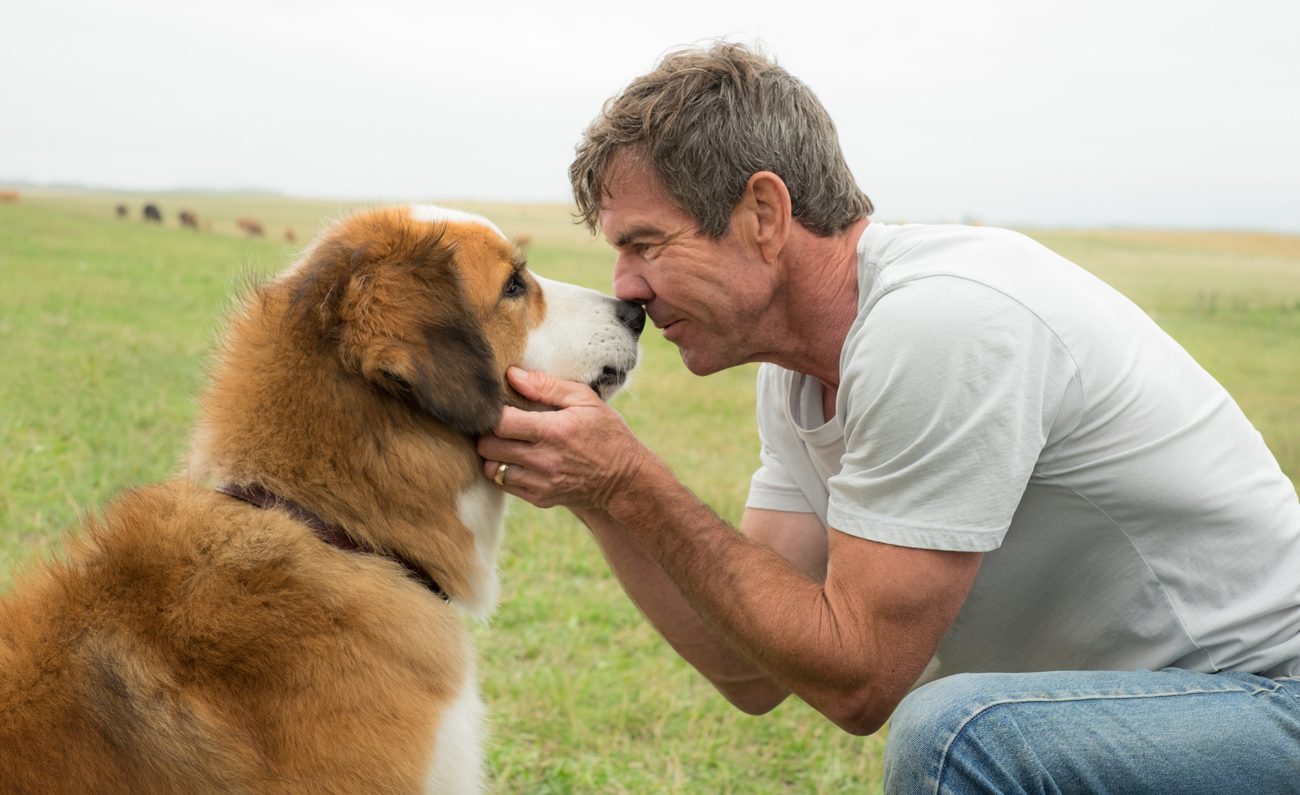 Dennis Quaid stars in a scene with a dog named "Buddy" in the movie "A Dog's Purpose." The Catholic News Service classification is A-II -- adults and adolescents. The Motion Picture Association of America rating is PG -- parental guidance suggested. Some material may not be suitable for children.(CNS photo/Universal)

NEW YORK (CNS) — While cats are said to be blessed with nine lives, the clever canine at the center of “A Dog’s Purpose” (Universal) — voiced by Josh Gad — guides us through his adventures over four eventful lifetimes. Repeatedly reincarnated, he (and, for one stint, she) returns in the guise of various breeds and encounters a range of human caregivers.

Although the non-scriptural concept of recurring earthly existences is kept strictly confined to the world of animals, the New Age-style philosophizing the four-legged protagonist engages in along the way may strike some viewers as a bore. That’s offset, though, by his droll, dog’s-eye view of the world.

During the first of his visits to the planet, as a golden retriever, he’s rescued from a dangerous situation and adopted by 8-year-old Ethan Montgomery (Bryce Gheisar). Ethan’s sympathetic — but unnamed — mom (Juliet Rylance) welcomes this addition to the household, and helps convince his reluctant (and equally nameless) dad, played by Luke Kirby, to accept the pooch, whom Ethan dubs Bailey.

Bailey becomes Ethan’s inseparable companion as the lad grows into a high school football star (KJ Apa) and finds true love with Hannah (Britt Robertson), a girl he meets at a fair. Ethan’s bright prospects are further burnished by winning a college athletic scholarship. But his father’s worsening alcoholism casts a pall over his life — and eventually threatens his future.

While his bond with Ethan proves the most enduring of his relationships with humans, during other intervals Bailey first serves as a police dog called Ellie and later becomes a Corgi named Tino. Ellie does her best to comfort her lonely trainer, widowed Chicago police officer Carlos (John Ortiz), and Tino helps to liven up the stagnant social life of his companion, pining single gal Maya (Kirby Howell-Baptiste).

Pet lovers will revel in director Lasse Hallstrom’s slight but charming screen version of W. Bruce Cameron’s best-selling 2010 novel. And parents will be pleased to find the movie free of any genuinely objectionable elements — albeit one brief scene may, or may not, imply that Maya and her boyfriend, Al (Pooch Hall), are living together.

Grown guardians also will want to note that some sequences are too potentially frightening for the smallest pups.

Those inclined to be cynical may balk at bucolic scenes vaguely reminiscent of a TV ad for hay fever medicine. Still, a good-hearted romantic wrap-up matching characters played by Dennis Quaid and Peggy Lipton succeeds in keeping things cuddly for all but the most jaundiced.

The film contains mature themes, including alcohol addiction, possible cohabitation, some stylized violence with brief gore, scenes of peril and light scatological humor. The Catholic News Service classification is A-II — adults and adolescents. The Motion Picture Association of America rating is PG — parental guidance suggested. Some material may not be suitable for children.

PREVIOUS: Readers offered journey through the theological life of the retired pope