Cardinal Dolan has one minute to read from Bible at inauguration 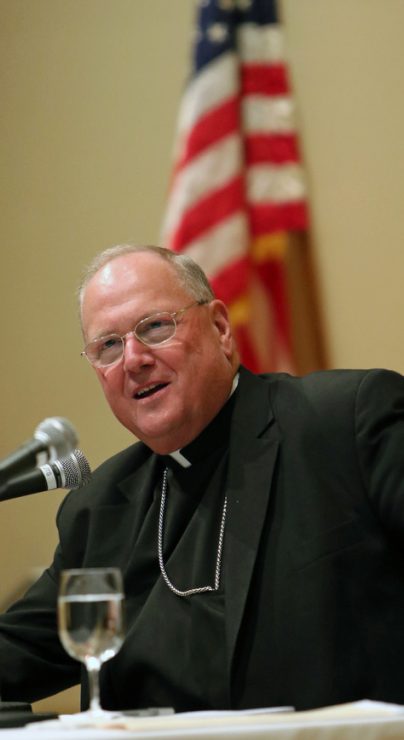 WASHINGTON (CNS) — New York Cardinal Timothy M. Dolan said the Scripture passage he chose to read at the Jan. 20 inauguration of Donald J. Trump as president — Wisdom chapter 9 in which King Solomon prays for wisdom to lead Israel according to God’s will — was an easy one to make.

“I pray it all the time,” he told Catholic News Service and joked that “the Lord still hasn’t answered the prayer.”

Jokes aside, Cardinal Dolan said that Solomon’s prayer has been one offered to God for centuries.

In the prayer, Solomon acknowledges that God made humankind “to govern the world in holiness and righteousness and to render judgment in integrity of heart.” The king continues by asking God for wisdom, “the consort at your throne, and do not reject me from among your children.”

Solomon also pleads with God to send wisdom “that she may be with me and work with me, that I may know what is pleasing to you.” He asks that his “deeds will be acceptable and I will judge your people justly and be worthy of my father’s throne.”

As for his appearance on the podium at the start of the inaugural ceremony with three other faith leaders, Cardinal Dolan explained that he was “flattered” to be invited to participate by inauguration planners.

The cardinal has one minute to read the passage. “That’s more than enough,” he said. “I’ve timed it.”

He also was asked to send his selection to the Trump team. “I don’t know if that was for vetting purposes or not, which I think is appropriate to do so,” he told CNS.

And in these divisive times in the country, Cardinal Dolan acknowledged that he opened himself to critics by agreeing to be part of the ceremonies on the West Front of the U.S. Capitol.

“I know they are (there) because they’ve written to me,” he said. “And as I tell them, had Mrs. (Hillary) Clinton won and invited me, I would have been just as honored.

“We pastors and religious leaders are in the sacred enterprise of prayer. People ask us to pray with them and for them. That doesn’t mean we’re for them or against them,” he added.

The cardinal noted that he had met Trump twice. The first time came Oct. 14 in the midst of the presidential campaign when Trump and his wife, Melania, made the six-block trip from Trump Tower to St. Patrick’s Cathedral. At the time, diocesan spokesman Joseph Zwilling said that Trump had requested the meeting weeks before it occurred.

For the record, Cardinal Dolan met Clinton a few months earlier and also at the dinner, according to Zwilling.

The inauguration of a new president can be a time of hope and renewal for the country, Cardinal Dolan said.

“Many people may have reservations of the president-elect and I certainly do, as with any incoming president. But in the great American tradition, we look at the time of an incoming president as a time of hope … a way to give a man a chance and try to fulfill some of the promises he made.”

Trump’s inauguration won’t be the first in which a Catholic cleric participated. History shows that Msgr. John Ryan, a pioneer of the church’s social justice advocacy who served a long term as director of the U.S. bishops’ social action department, offered a prayer at the President Franklin Roosevelt’s 1937 inauguration.

Prelates who prayed at inaugurations include Cardinal Richard J. Cushing of Boston at the inauguration of President John F. Kennedy in 1961; Cardinal Terrence J. Cooke of New York, at both of President Richard Nixon’s inaugurations in 1969 and 1973; and, most recently, Archbishop John R. Roach of St. Paul and Minneapolis, who was U.S. bishops’ conference president in 1977 when President Jimmy Carter took the oath of office.

Cardinal Dolan said he attended ceremonies as a private citizen for President Ronald Reagan in 1981 and President George H.W. Bush in 1989.