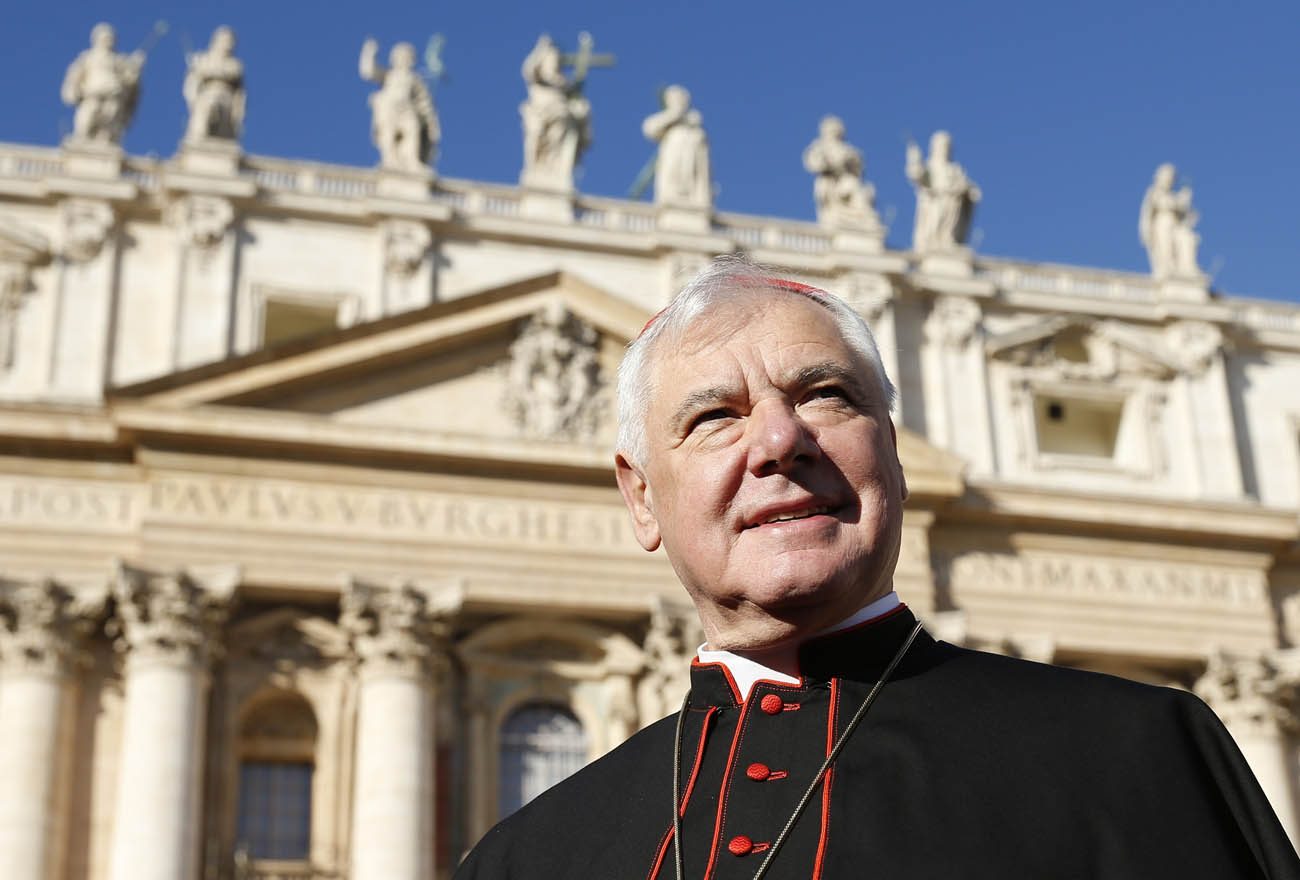 Cardinal Gerhard Muller, prefect of the Congregation for the Doctrine of the Faith, is pictured in St. Peter's Square at the Vatican in this Nov. 19, 2014, file photo. Cardinal Muller said the Catholic Church is "very far" from a situation in which Pope Francis is in need of "fraternal correction." He made his comment in an interview about the pope's apostolic exhortation, "Amoris Laetitia," with Italian news channel TGCom24. (CNS photo/Paul Haring)

VATICAN CITY (CNS) — The Catholic Church is “very far” from a situation in which the pope is in need of “fraternal correction” because he has not put the faith and church teaching in danger, said Cardinal Gerhard Muller, prefect of the Congregation for the Doctrine of the Faith.

In the document, the cardinal said, Pope Francis asks priests “to discern the situation of these persons living in an irregular union — that is, not in accordance with the doctrine of the church on marriage — and asks for help for these people to find a path for a new integration into the church according to the condition of the sacraments (and) the Christian message on matrimony.”

In the papal document, he said, “I do not see any opposition: On one side we have the clear doctrine on matrimony, and on the other the obligation of the church to care for these people in difficulty.”

The cardinal was interviewed about a formal request to Pope Francis for clarification about “Amoris Laetitia” and particularly its call for the pastoral accompaniment of people who are divorced and civilly remarried or who are living together without marriage. The request, called a “dubia,” was written in September by U.S. Cardinal Raymond L. Burke, patron of the Knights of Malta, and three other cardinals. They published the letter in November after Pope Francis did not respond.

In an interview later, Cardinal Burke said the pope must respond to the “dubia” because they directly impact the faith and the teaching of the church. If there is no response, he said, a formal “correction of the pope” would be in order.

Cardinal Muller told the Italian television that “a possible fraternal correction of the pope seems very remote at this time because it does not concern a danger for the faith,” which is the situation St. Thomas Aquinas described for fraternal correction. “It harms the church” for cardinals to so publicly challenge the pope, he said.

In his letter on the family, Pope Francis affirmed church teaching on the indissolubility of marriage, but he also urged pastors to provide spiritual guidance and assistance with discernment to Catholics who have married civilly without an annulment of their church marriage. A process of discernment, he has said, might eventually lead to a determination that access to the sacraments is possible.

The possibility reflects a change in church teaching on the indissolubility of marriage and the sinfulness of sexual relations outside a valid marriage, in the view of the document written by Cardinals Burke; Walter Brandmuller, a German and former president of the Pontifical Commission for Historical Sciences; Carlo Caffarra, retired archbishop of Bologna, Italy; and Joachim Meisner, retired archbishop of Cologne, Germany.

In the TGCom24 interview, Cardinal Muller said, “everyone, especially cardinals of the Roman church, have the right to write a letter to the pope. However, I was astonished that this became public, almost forcing the pope to say ‘yes’ or ‘no'” to the cardinals’ questions about what exactly the pope meant in “Amoris Laetitia.”

NEXT: Pope asks for warm hearts to help homeless deal with the cold