Book on faith, culture, politics of past 50 years is essential reading 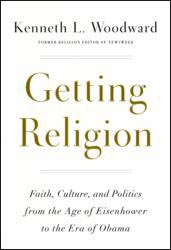 “Getting Religion: Faith, Culture and Politics from the Age of Eisenhower to the Era of Obama” by Kenneth L. Woodward. Convergent (New York, 2016). 447 pp. $30.

In the introduction to “Getting Religion,” Kenneth L. Woodward states two goals for writing it: to “provide an account of American religion, culture and politics over the past 50 years by someone who was fortunate enough to be in the right place at the right time to witness events and people in ways that others never could or did; and to challenge some competing narratives through my personal reflections on what happened and why.”

That he far surpasses those goals is just one reason why this book is essential reading.

In the first two chapters, Woodward blends autobiography with a description of how he saw the United States during the 1940s and ’50s. Of the latter decade he writes, “religion was embedded in the national culture as well as in the landscape — though, like minerals in the soil, particular religious traditions were deposited at different depths and levels of concentration.”

Although the Second Vatican Council and some of its effects, and the “birth control encyclical,” “Humanae Vitae,” fill volumes of reporting and commentary, Catholic readers should appreciate Woodward’s take on these critical moments in Catholic history even though they occupy only a fraction of the pages.

The issues, events and personalities he covers go far beyond the Catholic Church. The second part of the book provides an extensive look at what was occurring in the ’60s and early ’70s — the civil rights movement, feminization of theology and entrepreneurial religion — i.e. the evangelists, whom he describes as “performance artists.”

In each of these areas, Woodward shows how those facets of culture grew out of organized religion or seeped into it, depending on the movement, issue or cause.

Segments of interviews done during his Newsweek stint with the Rev. Billy Graham, Hillary Clinton, New York Gov. Mario Cuomo, the Dalai Lama, Elisabeth Kubler-Ross and others add context to the narrative about the respective times in which they were prominent national and world figures.

While “Getting Religion” can be heavy reading due to the subject matter, Woodward adds a smattering of humor throughout. For example, he recalls when Bill Bright, founder of Campus Crusade for Christ, asked him, “Have you accepted Jesus Christ as your personal lord and savior?” Woodward replied, “No, I don’t want a personal lord and savior. I prefer the one everyone else has.”

Two factual errors detract from the overall quality of this work. One is that the promulgation date for Blessed Paul VI’s encyclical “Populorum Progressio” (“On the Development of Peoples”) is listed as 1961 instead of 1967. Blessed Paul VI was not elected pope until 1963.

Nonetheless, one would be hard pressed to find anyone else who could compile and organize its contents, and write this book as well as Woodward. His 38-year tenure as the religion editor at Newsweek, combined with knowledge of and lifelong practice of his Catholic faith, are all the credentials he needs.

With that combination Woodward provides an engaging story for readers who “were there,” either by participation or merely by living through those times. For those who only know what they read about those decades and the people, events and movements integral to them, they will feel as though they “were there” once they have read “Getting Religion.”

NEXT: A self-absorbed Batman goes ‘Lego’ again, for laughs