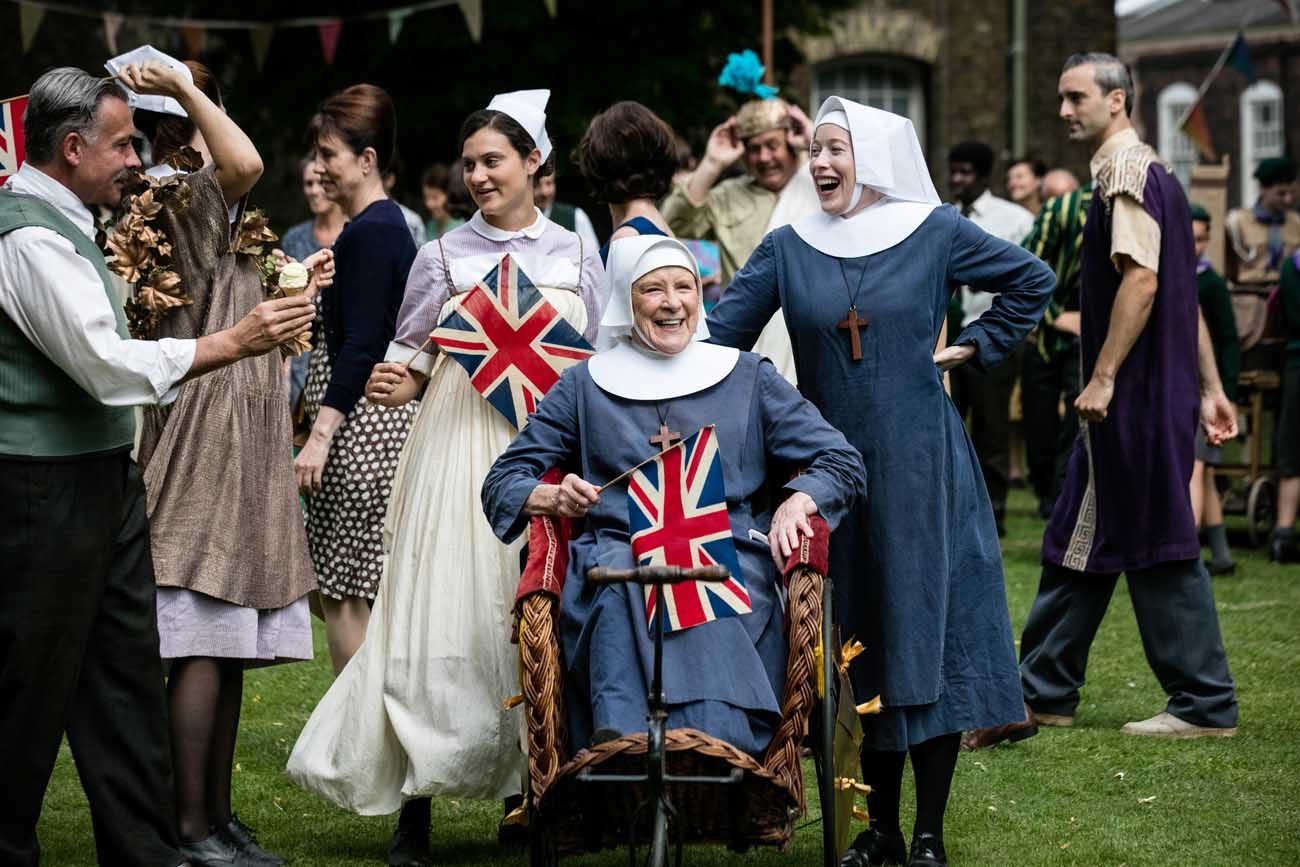 Judy Parfitt stars as Sister Monica Joan, center, and Victoria Yeates as Sister Winifred, in the PBS series "Call the Midwife." The series chronicles the lives of nuns from the fictitious Anglican order of St. Raymond of Nonnatus who, together with their un-vowed colleagues, assist expectant mothers in the Poplar area of London's East End during the 1950s and '60s. (CNS photo/PBS)

As veteran viewers will know, “Call the Midwife” chronicles the lives of nuns from the fictitious Anglican order of St. Raymond of Nonnatus who, together with their un-vowed colleagues, assist expectant mothers in the Poplar area of London’s East End during the 1950s and ’60s.

Although Sister Julienne (Jenny Agutter), the nun in charge, expresses reservations, the sisters’ overall attitude falls far short of vigorous opposition to this emerging trend. That’s in keeping with the cautious acceptance the Church of England extended to artificial contraception beginning with the Lambeth Conference of 1930.

However, when use of the pill engenders complications for local woman Wilma Goddens (Olivia Darnley), with ultimately tragic results, the midwife who cared for her, Trixie Franklin (Helen George), revises her attitude.

Thus, stylish Trixie tells Anglican vicar Tom Hereward (Jack Ashton), her former fiance, “You and I have different ideas about miracles. I honestly thought that was what the pill was, and if the doctors are right, and there are issues over its safety, then I’m suspending all belief in miracles until further notice.”

The fact that midwife Patsy Mount (Emerald Fennell) and nurse Delia Busby (Kate Lamb) try to keep their lesbian relationship a secret also accurately reflects the era. Like the other mature elements already mentioned, this aspect of the plot indicates that “Call the Midwife” makes appropriate viewing for discerning adults only.

In the 2016 Christmas Day special episode, a Nonnatus House contingent traveled to South Africa to shore up the order’s clinic there, which was in danger of closing due to inefficiency. A preoccupation with ineptitude informed Sister Ursula’s actions when she subsequently replaced Sister Julienne at the head of the staff.

Sister Julienne clashes with her new superior. But she also understands that an experience of failure in Sister Ursula’s past motivates her to be exacting now.

When Sister Ursula limits her midwives to 20-minute home visits, however, one of Barbara Gilbert’s (Charlotte Ritchie) patients suffers the nearly fatal consequences of this misguided policy.

In keeping with the program’s fundamentally humane approach, instead of feeling vindicated when a villain receives her comeuppance, we’re moved with compassion toward Sister Ursula as she penitently confronts her demons and grievous flaws.

The death of the redoubtable, cantankerous, but compassionate Sister Evangelina (Pam Ferris) at the end of Season Five, has brought Sisters Julienne, Monica Joan (Judy Parfitt) and Mary Cynthia (Bryony Hannah) more to the forefront.

Concerned with Sister Mary Cynthia’s mental fragility after she was violently assaulted in Season Five, Sister Julienne entrusts the motherhouse with the care of the young sister, who is preparing to profess her vows.

In her 90s, and contending with dementia, Sister Monica Joan accompanies convent handyman Fred Buckle (Cliff Parisi) to a mental hospital called Linchmere as he looks for a possible home for Reggie (Daniel Laurie), an orphaned young man with Down syndrome who is in Fred’s care.

Having concluded the place isn’t appropriate for Reggie, Sister Monica Joan is distraught to discover that Sister Mary Cynthia is a patient there. She says to Fred, “We must muster our cohorts. We must instruct our troops. An innocent is in danger.”

This beautiful, touching, well-played moment underscores why “Call the Midwife,” is exceptional among TV dramas. Hannah conveys perfectly the light of relief that comes into Sister Mary Cynthia’s glazed-over eyes as she sees her sisters. And Agutter’s warm and calm Sister Julienne makes an effective counterpart to Parfitt’s wonderfully expressive Sister Monica Joan.

Even more significantly, in “Call the Midwife’s” world, no soul is entirely lost or beyond God’s boundless — and endless — love.

NEXT: Despite a flimsy premise, ‘The Boss Baby’ demands a few laughs