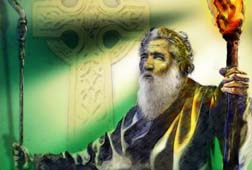 "The Trials of Saint Patrick" is an eight-part audio dramatization produced by Augustine Institute Radio Theatre about his holiness and dedication to the people of Ireland. The series was released on St. Patrick's Day, March 17. (CNS) See AUDIO-TRIALS-PATRICK March 17, 2017. 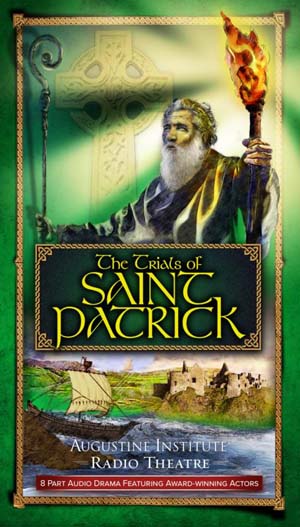 “The Trials of Saint Patrick” is an eight-part audio dramatization produced by Augustine Institute Radio Theatre about his holiness and dedication to the people of Ireland. The series was released on St. Patrick’s Day, March 17. (CNS)

WASHINGTON (CNS) — St. Patrick “comes alive brilliantly” in a just-released eight-part audio drama from Augustine Institute Radio Theatre, said the British actor who is the voice of the elder Patrick in the series.

St. Patrick was “a man who endures the most incredible suffering, endures slavery, and his faith — which is perhaps marginal at the beginning — grows and endures and then compels him to return not just to the land but to the man who enslaved him,” John Rhys-Davies told Catholic News Service in a March 16 telephone interview.

“The Trials of Saint Patrick” drama debuted March 17, St. Patrick’s Day. It is available at airtheatre.org.

Rhys-Davies is best known for his roles in “Raiders of the Lost Ark,” “Indiana Jones and the Last Crusade” and “The Lord of the Rings” trilogy. O’Meallaigh is known for his appearances in Irish television and has starred as Prudentius the monk in “Vikings,” now in its fourth season on the History Channel.

The audio drama is based on the history and writings of St. Patrick himself. He grew up a privileged youth in Britain. In A.D. 401 he was kidnapped and enslaved in Celtic Ireland. In six years as an ill-fed shepherd, he took solace in talking to God.

Eventually escaping, Patrick later began his crusade to convert Ireland to Christianity with spectacular success, founding hundreds of churches and converting thousands, using the lowly shamrock as a teaching tool to explain the Trinity. Within 200 years, pagan Ireland was virtually all Christian.

Rhys-Davies, a Welshman, told CNS: “I knew the vague outlines of the story but didn’t actually know the extraordinary story.”

In telling the story of such men “whose lives are exemplars in terms of courage, duty, compassion and faith,” one cannot help but be “impressed and hopefully marginally changed,” said Rhys-Davies.

“Because of them, we have Western civilization for all its faults and all its difficulties,” he added.

St. Patrick “wanted to change and liberate Ireland from the hell it was in and he does the drudgery work he does the slog, he does the ‘get your hands dirty'” work, he said.

“Rome itself was a terrible system. Yes, we owe them a great deal, but it really would have been like living under the Third Reich, and the collapse of Rome and the collapse of civil authority turns most parts of Europe into barbarism,” Rhys-Davies remarked.

“It is the emergence of Christianity that provides the backbone for the re-emergence of civil authority and a framework for what society should be like. … The creation of a civilization really is what is happening,” he added. “And we’re still creating that civilization and at times we seem to have abandoned it.”

“The Trials of St. Patrick” is the second audio drama from Augustine Institute Radio Theatre, also called AIR Theatre. The first was a 10-part program titled “Brother Francis: The Barefoot Saint of Assisi,” and more are planned. A news release about AIR Theatre said it aims “to provide high quality audio dramas for the entire family.”

The St. Patrick drama is “a great story and I think it’s wonderfully told,” said Rhys-Davies. “The actors in it are pretty darn good. It hooks you, it engrosses you.”

PREVIOUS: Examination of Mencken’s writings on religion has lessons for today

NEXT: A story of love, race and world politics in ‘A United Kingdom’