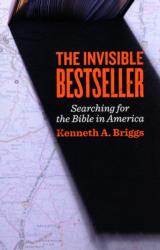 Kenneth Briggs has been a religion reporter for Newsday, The New York Times and National Catholic Reporter. His Methodist background deeply influences his story of mainline Protestant and evangelical readers of the Bible in “The Invisible Bestseller.”

Catholic understanding, interpretation and veneration of the Bible is referred to rarely and usually negatively. Briggs argues, contrary to reality, that the Catholic Church discourages its members from reading the Bible and allows only the clergy to interpret it. This has not been true since the Second Vatican Council.

Briggs devotes an extensive amount of his book to arguments within the Society of Biblical Literature between evangelical and mainline Protestants, which he rightly sees as an extension of the faith vs. reason debates brought about by the Enlightenment. In this, however, he ignores centuries of internal Catholic wrangling with the relationship of faith and reason and how this debate impacts Catholic understandings of the Bible, as can be seen in Catholic thinkers ranging from Augustine to Aquinas, and beyond.

He is correct to say that the Catholic Church backed away from having its people read the Scriptures after the Protestant Reformation begun by Martin Luther and its emphasis on “sola scriptura” (Scripture alone), which was misunderstood by Catholics at the time as a rejection of the tradition of the church, not just a reform of it. This was, of course, a misunderstanding of what Luther actually had in mind.

The intensive dialogues between Catholics and Lutherans since Vatican II, both nationally and internationally, have shown our two traditions to be much closer on this and other issues, than once was thought.

But Briggs seems to be totally unaware of the ecumenical movement that has taken place since Vatican II. His idea of mainline Protestantism and its relationship with American Catholicism seems to be frozen in the preconciliar past, as if the council never really happened. Likewise, while devoting great attention to the Society of Biblical Literature he does not refer to the Catholic Biblical Association even once. I guess Catholic biblical scholars don’t exist as far as Briggs is concerned.

Briggs also seems to have some kind of animus regarding all Christian biblical scholars, blaming them for “debunking” and “discrediting” the Bible and convincing people that it was put together “haphazardly.” He seems to believe that Darwin’s theory of evolution was a crisis with regard to the understanding of the two differing creation stories in the Book of Genesis that was never resolved and is still being fought out.

In terms of Catholicism that is simply false. Early in the 20th century, the pope and the Vatican made clear that both evolution (science/reason) and Genesis (faith) could be true at the same time, each answering different questions: Science tells us the “how” of creation. Genesis explains “why.”

There is much that is good and interesting in this book, but I cannot recommend it to a general Catholic readership, though some may enjoy it.

Fisher is a professor of theology at St. Leo University in Florida and a retired official of the U.S. bishops’ Secretariat for Ecumenical and Interreligious Relations.

PREVIOUS: Glories abound for ‘Beauty and the Beast,’ with one exception

NEXT: Sci-fi thriller takes a dark, moody look at ‘Life’