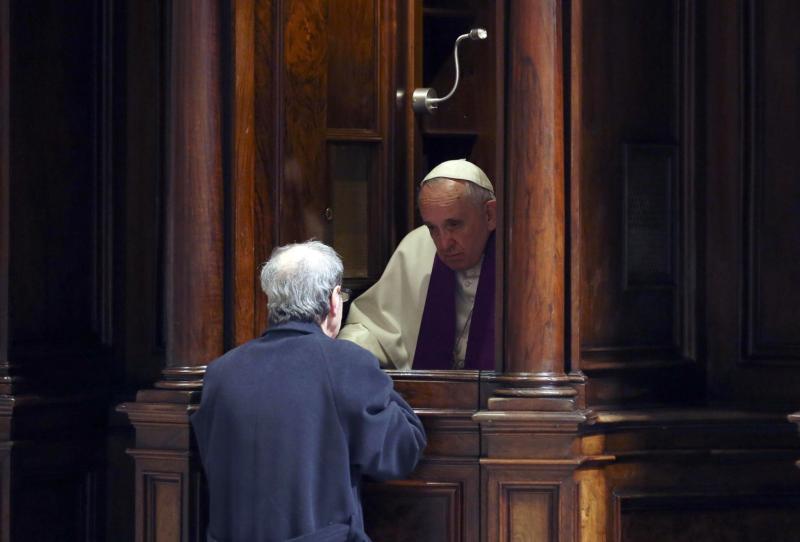 Pope Francis hears confession during a penitential liturgy in this early March 2015 file photo in St. Peter’s Basilica at the Vatican.(CNS photo/Alessandro Bianchi pool via EPA)

VATICAN CITY (CNS) — Hear confession every time someone asks, Pope Francis said, and don’t ever put limited hours on the sacrament of reconciliation.

“Please, let there never be those signs that say, ‘Confessions: Mondays and Wednesdays from this time to that time,'” he told hundreds of confessors and other participants attending an annual course sponsored by the Apostolic Penitentiary, a Vatican court that handles issues related to the absolution of sin.

“Hear confession every time someone asks you. And if you are sitting there, praying, leave the confessional open because God’s heart is open,” he said March 17.

Confession “is a pastoral priority,” and is a daily call to head to the “peripheries of evil and sin, and this is an ugly periphery,” he said.

“I’ll confess,” he told his audience, that the Apostolic Penitentiary “is the tribunal that I really like because it is a ‘tribunal of mercy,’ where one goes to get that indispensable medicine for our souls, which is divine mercy.”

A good confessor, he said, has begged God for “the gift of a wounded heart, capable of understanding others’ wounds and of healing them” with God’s mercy, he said.

Accompany men and women “with prudent and mature discernment and with true compassion for their suffering, caused by the poverty of sin,” he said.

So much harm is done to the church and human souls when a confessor is not guided by prayer and the Holy Spirit in discerning what God wants to be done, he said.

“The confessor never follows his own will and doesn’t teach his own doctrine,” but is called to be God’s servant in full communion with the church.

Be ready to use confession as an opportunity to evangelize and remind people of the basic, essential truth of faith and morality. Pray to God for the gift of humility and the recognition of one’s own sins that God fully pardoned, he told them.

This kind of prayer is not only “the prime guarantee for avoiding every harsh approach that fruitlessly judges the sinner and not the sin,” he said, it also reminds confessors they are “simple, albeit necessary, administrators” of God’s free gift. “And he will certainly be pleased if we make extensive use of his mercy.”

Pope Francis also asked confessors to be very careful in discerning whether a person may be suffering from a mental disorder, “which must be verified through a healthy cooperation with” experts, or from demonic influence or possession.

Whenever a confessor recognizes the presence of evil spirits, he said, never hesitate to refer to an exorcist, who is charged with “this sensitive and necessary ministry” in each diocese.

NEXT: In notorious Santiago community, church works to give people options