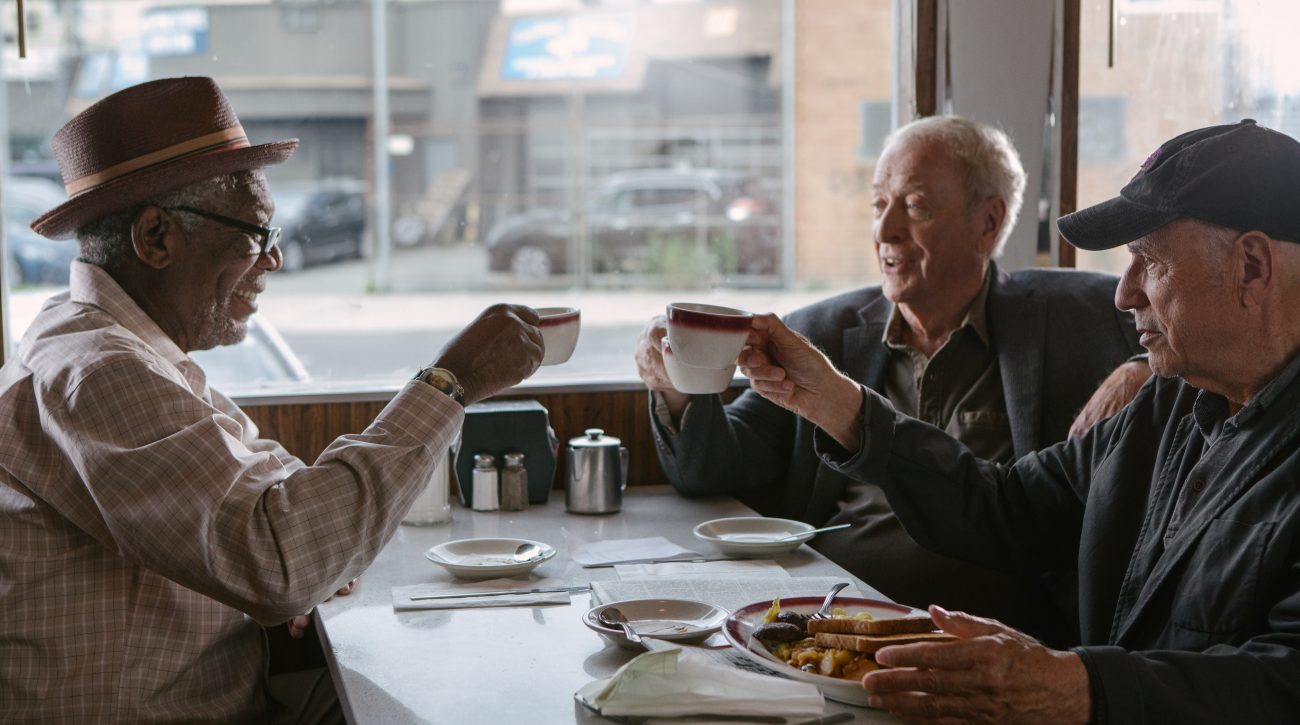 Morgan Freeman, Michael Caine and Alan Arkin star in a scene from the movie "Going in Style." (CNS photo/Warner Bros.).

Director Zach Braff’s remake of Martin Brest’s 1979 film stars Morgan Freeman, Michael Caine and Alan Arkin as former co-workers and longtime best friends driven to desperation by financial woes. The company they used to work for is moving its operations overseas, and being restructured in a way that will eliminate their hard-earned pensions.

In response, kindly granddad Joe Harding (Caine), who recently witnessed a bank robbery, cooks up an unlikely scheme. Together with secretly ailing Willie Davis (Freeman) and grouchy pessimist Albert Gardner (Arkin), he’ll stage a similar heist at the same branch — by coincidence, it belongs to the institution financing their ex-employer’s reorganization.

The pals agree to take only the amount they would have been paid if their checks had continued to arrive for what each estimates to be his foreseeable remaining lifespan. Anything above that sum will be donated to charity. They also opt to use only blanks in their guns.

As the aspiring thieves get tips from experienced criminal Jesus (John Ortiz), Albert finds romance with Annie (Ann-Margret), a checkout lady at his local grocery store. The prematurely intimate nature of their relationship becomes a source of admiration and envy for Joe and Willie.

By the time Matt Dillon shows up as FBI Special Agent Arlen Hamer, it’s clear that “Going in Style” amounts to a complete waste of its cast’s considerable gifts.

An especially egregious instance is the squandering of Christopher Lloyd. His minor character, hopelessly senile Milton Kupchak — a denizen of the fraternal lodge where the main trio hangs out — is a crude caricature of Jim Ignatowski, the pixilated cabbie Lloyd memorably played on the TV series “Taxi.”

While this is not a movie from which viewers are likely to draw any real-life moral conclusions, Theodore Melfi’s screenplay does present the oldsters’ actions as justified and ultimately harmless. The folks at the Federal Deposit Insurance Corp., we suspect, would beg to disagree.

The film contains a frivolous treatment of crime, including drug use, a couple of brief premarital bedroom scenes, a scatological sight gag, about a half-dozen uses of profanity, some vulgar sexual references, a single instance of rough language and considerable crude and crass talk. The Catholic News Service classification is A-III — adults. The Motion Picture Association of America rating is PG-13 — parents strongly cautioned. Some material may be inappropriate for children under 13.

NEXT: One novel captivates reader, but other fails in telling timely tale