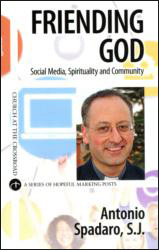 What hath technology wrought? With the internet’s creation a new universe emerged before our very eyes. Billions of the world’s 21st-century citizens now routinely inhabit and feel at home in this universe.

It is a networking phenomenon, and it keeps us connected — or not. But the internet’s capacity to establish enriching connections among human beings is what fascinates Jesuit Father Antonio Spadaro in a new book titled “Friending God.”

The Italian priest characterizes the internet as “a place,” one that “becomes more and more organically integrated into our everyday lives, a new existential context.”

Because of a famous interview he conducted with Pope Francis early in his pontificate, Father Spadaro’s name will be familiar to many. The 2013 interview appeared in leading Jesuit publications around the world.

Father Spadaro is editor of La Civilta Cattolica, a journal published in Rome by the Jesuits that is read widely by close observers of the church.

True enough, some employ the internet as a place to escape into, an environment of relationships that lack face-to-face contact. Here some exploit others’ weaknesses or propagandize them to ill effect.

For others, moreover, the internet becomes a means of filtering out the voices and thinking of all who differ from them in any way.

All of that appears highly regrettable to Father Spadaro. It bypasses the digital highway’s capacity to form communion among human beings — to build respect and foster authentic human communication.

The book’s exploration of the internet and Web-based communication as an environment well suited to the mission of Christian evangelization is one of its strongest and most thought-provoking features. This exploration pointedly challenges pastoral ministers, however.

For, an apprehension on Father Spadaro’s part is that the mission of online evangelization will be viewed simply as the Web-based delivery of religious “content” in a “marketplace of ideas” that is “saturated with information.”

In his discussion of online evangelization, Father Spadaro accents the essential role of witness. He believes that to communicate nowadays “means to bear witness.”

This indicates that in contemporary times “any proclamation of the Gospel that is not based on the authenticity of one’s everyday life” will serve as a message to understand “with the mind but not with our hearts.”

Society’s computer-based technologies “invite us to expand our horizons and to listen to the deeper desires in our heart,” Father Spadaro writes. The answer to whether we can “live out the Gospel online,” he concludes, seems “decisively” to be in the affirmative.

For him, then, the challenge to confront is “not how we should ‘use’ the internet, as one often hears, but rather how to ‘live well’ in the internet age.”

He acknowledges the complexity of evangelizing in an “age of social networks.” Nonetheless, he labels the task “quite congenial” for Christians, “who are called daily to transform mere contact into closeness.”

A compelling theme of “Friending God” is its recognition of the internet as a “real,” and not just “virtual,” place. “A part of the life we live has, indeed, become digital,” he stresses.

“Cyberspace is not unreal, fictional or merely virtual, but rather a true extension of our real, everyday lives,” he remarks. He suggests it is unhealthy to imagine cyberspace as “merely virtual” or like “a play space” in which to “create a second self” or an alternative and banal identity.

A central goal of “Friending God” is to show that “a part of the life we live has, indeed, become digital,” an environment “through which we express not only our identity but our very ‘presence.'”

Of course, there is much food for thought and discussion in such an observation. What is the impact of the Internet and its many extensions on the actual life that you or I lead?

To promote individual reflection and group discussions, the book includes a reflection guide developed by Daniella Zsupan-Jerome, a theologian who studies social communication in the digital age. She teaches at Notre Dame Graduate School of Theology in New Orleans.

The reflection guide helpfully weaves penetrating questions together with proposals for prayer. The following words of petition to God found in one of Zsupan-Jerome’s prayers seem to reflect rather succinctly the very heart and soul of Father Spadaro’s book: “Send us your Spirit so that we can recognize and practice real presence in and through digital culture, and open our eyes to how words, signs and images on the screen may reveal more fully to us the real presence of others.”

PREVIOUS: Aliens are bursting out all over in ‘Covenant’

NEXT: Teen-love drama ‘Everything, Everything’ puts cynics to the test