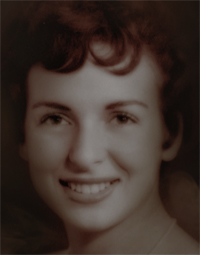 Rosalie Edwards, who died of ovarian cancer in 2006, inspired her composer son to write a major new work.

NEW YORK (CNS) — With the publication of his work “Requiem for My Mother,” Catholic film and TV composer Stephen Edwards turned grief into art. The source of his bereavement was the sudden death of his mom, Rosalie, from ovarian cancer in February 2006.

Together with co-director David Haugland, Edwards has created a winsome, interesting and touching documentary chronicling his composition’s journey from its genesis to its 2008 debut at Rome’s Basilica of St. Ignatius of Loyola, where it was presented as part of that year’s International Festival of Sacred Music and Art.

The eponymous film premieres on PBS stations Sunday, May 14, 7-8 p.m. EDT, and will air throughout May in conjunction with Mother’s Day. Viewers should consult local listings for broadcast times in their area.

Aside from two bleeped-out vulgarities, “Requiem” contains nothing objectionable. But such mature themes as death and mourning make it best for adults and adolescents.

Edwards, who has scored more than 60 movies and television shows, including “The Prestige,” “Amelia” and “Desperate Housewives,” sees composing his “Requiem” as “the most personal thing I ever had the privilege of doing.”

A child of Sicilian immigrants and a native — and lifelong — Michigander, Rosalie was, in Edwards’ words, “a super-glamorous child of the ’50s.” Edwards calls the talented flutist “a natural musician” and adds that she “never wavered in the support of my music from the time I was 7 until the day she died.”

A phone call from conductor Candace Wicke gives Edwards a deadline for his composition; she convinces him to premiere it at the festival six months later. Together, Wicke and Edwards would become the first American conductor and composer to showcase a composition at the prestigious event.

The ancient funeral rite of the Latin church, a requiem Mass, Edwards says, “sends the soul from the living world to a cosmic, eternal world.” Aiming to honor his mother on a large scale, Edwards wrote for a 60-voice children’s and 200-voice adult choir as well as a 50-piece orchestra.

Beginning with “Requiem Aeternam” and ending with “In Paradisum,” a requiem has a series of standard texts, which Haydn and Verdi, among many others, have set to music. (Mozart’s famous version was left unfinished at his death.) Edwards’ challenge was to come up with something original.

Focused on finishing his score, Edwards entrusts Wicke with teaching the intricate, demanding piece to the amateur singers who would be performing it. They, in turn, are understandably daunted by the challenges of singing unfamiliar material of singular importance to the composer — and doing so on the largest stage of their lives.

As Edwards says, “There are so many possibilities for things to go wrong.”

In any ordinary setting, Wicke wouldn’t appear to be a particularly intimidating figure. Yet the intensity of her coaching leaves the singers working under her baton with a different impression. What she tells them during a rehearsal in Rome sums up her approach: “I’ve been dragging you along and dragging you along and you’re not getting the point,” she complains.

Later, however, Wicke softens. She even becomes teary as she thanks the choristers for their gifts and talents.

Wicke’s formidable presence dominates the film’s second act, with Edwards increasingly occupying the background. But in the third act, he regains center stage on the night of the live performance.

The directors eschew a traditional narrator throughout the documentary. Instead, Edwards, through a series of interviews, guides the audience through the events leading from his work’s conception to its completion.

As the Prague Philharmonic accompanies the two chorales during the “Requiem’s” premiere, Edwards, alongside his brother Jim, confronts the anger and sorrow which inspired him to commemorate Rosalie. The brothers’ emotions and those conveyed by the music effectively counterpoint each other.

In one of the film’s more touching moments, Edwards recreates the piano music he played when he sensed Rosalie was slipping away. As a home video shows them playing the same instrument together, Edwards says, “It was the musician talking to the musician here.”

Although the documentary isn’t comparable, as an artistic achievement, to the remarkably beautiful, and powerful, composition whose creation it recounts, it is, nonetheless, a fitting companion to the music — and will deservedly gain new admirers for it. That should help Edwards secure a legacy to transfer to his children.

“I’m hoping it’s something they’ll remember me by,” he says.