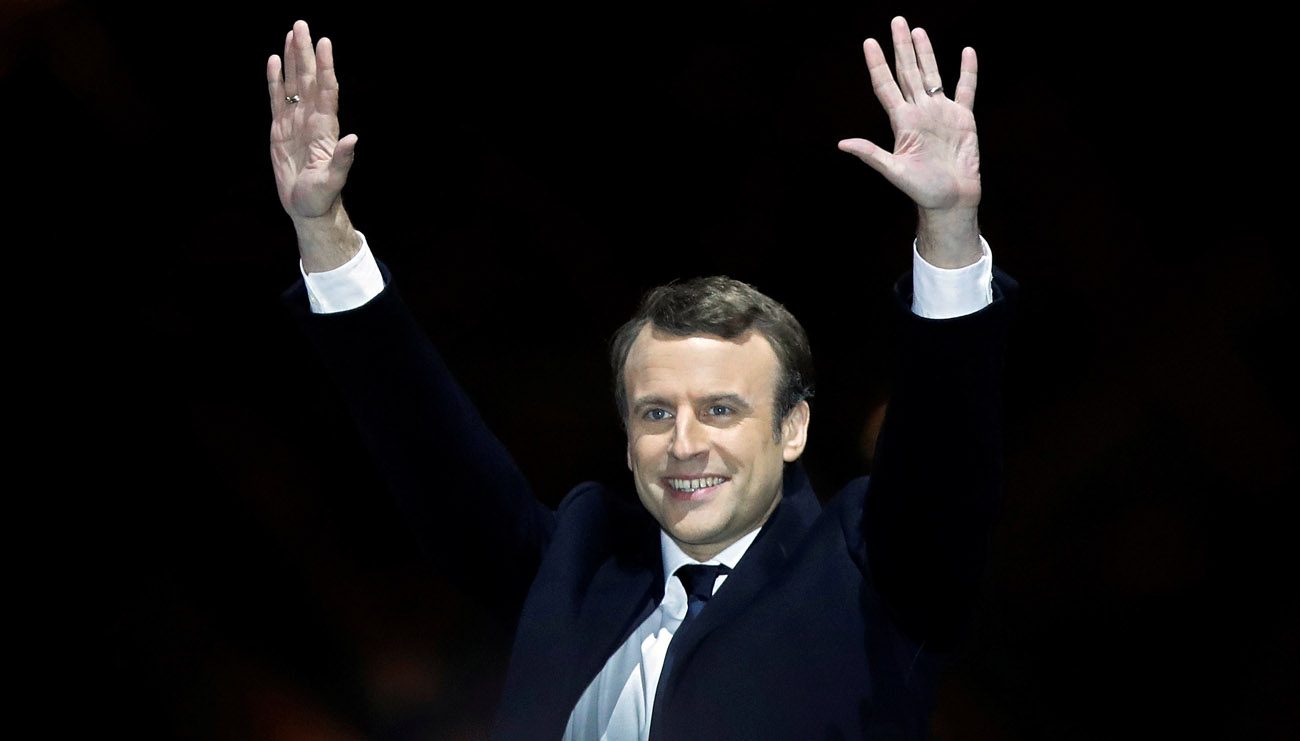 French President-elect Emmanuel Macron celebrates at his victory rally near the Louvre in Paris May 7. (CNS photo/Christian Hartmann, Reuters)

PARIS (CNS) — The head of the French bishops’ conference welcomed the election of President-elect Emmanuel Macron and said he hoped June legislative elections would not place the country “in an ungovernable situation.”

Archbishop Georges Pontier of Marseille, president of the French bishops’ conference, told Vatican Radio May 8 that French Catholics had also been left “divided like the rest of French society” and said he counted on Macron and his new government “being able to function.”

“Macron has been elected in an important manner — we must hope he succeeds for the good of our country, otherwise it will be catastrophic,” said Archbishop Pontier.

“Priorities for his new five-year term must include struggling against unemployment, which is so destructive for families, for prospects and for projects, as well as the necessity of staying in Europe — and giving this Europe the means of retaining the respect of every people.”

Macron won the second-round presidential ballot with 66.1 percent of votes against 33.9 percent taken by Marine Le Pen, head of France’s National Front. Macron ran on a pro-market platform that included support for the European Union and cuts to public administration, as well as lower corporation taxes and measures to defend secular values.

At 39, the new president is France’s youngest head of state for two centuries. He swept to victory just a year after setting up his 200,000-member movement, En Marche! (On the move).

In a May 3 interview on his diocesan website, Archbishop Pontier said the Catholic Church had sought to encourage “reflection and discernment” among voters, rather than “taking sides for one or another candidate.”

However, the French daily Le Monde said May 4 that the church’s refusal to back Macron against Le Pen had “provoked a deep discontent among the faithful.” France’s highest-circulation Catholic newspaper, La Croix, declared support for Macron and accused church leaders in a May 5 editorial of lacking will “to put an end to extremism.”

Born in Amiens, northwest of Paris, Macron was educated at Jesuit-run La Providence high school, before studying at the capital’s prestigious Ecole Nationale d’Administration and joining Rothschild and Cie Banque in 2008 as an investment banker.

In 2007, he married his former La Providence drama and literature teacher, Brigitte Trogneux, who was 24 years older and had three children from a previous marriage.

Macron worked as an economic adviser to President Francois Hollande and was appointed economy minister in 2014, deregulating some branches of industry and liberalizing Sunday trading. He resigned last August to pursue his presidential bid.

French writer Samuel Pruvot, who interviewed the new president at length for a book, said Macron sought baptism at age 12 under the influence of his Jesuit teachers, but viewed the Catholic faith “more intellectually than spiritually” and would “distance himself as much as possible from church, faith and Catholicism” as president.

“He’ll be diplomatic with the church, treating it like an elderly aunt whom he hasn’t seen for a long time, and who’s left his life, but for whom he still retains some affection,” Pruvot told the Catholic online portal Aleteia May 4.

“Macron recognizes there’s a law of God and a law of people, which aren’t the same and reflect a different hierarchy of values. … He recognizes this, but doesn’t adhere to it, since he considers that the truth is inaccessible and one must simply seek a consensus so people can calmly live together.”

In a joint declaration published May 5 in La Croix, 38 Catholic organizations urged voters not to support Le Pen and warned that the National Front’s program posed “a danger to democracy, social peace and Europe’s future.”

However, leaders of France’s pro-family “La Manif Pour Tous” movement, whose nationwide protests against same-sex marriage, assisted suicide and other liberal changes have been supported by some Catholic bishops, warned citizens that Macron would “continue the anti-family policy” of Hollande.

Both Macron and Le Pen visited Catholic cathedrals in Rodez and Reims respectively during their final day of campaigning May 5. Polling experts said both attracted a substantial number of Catholic votes.