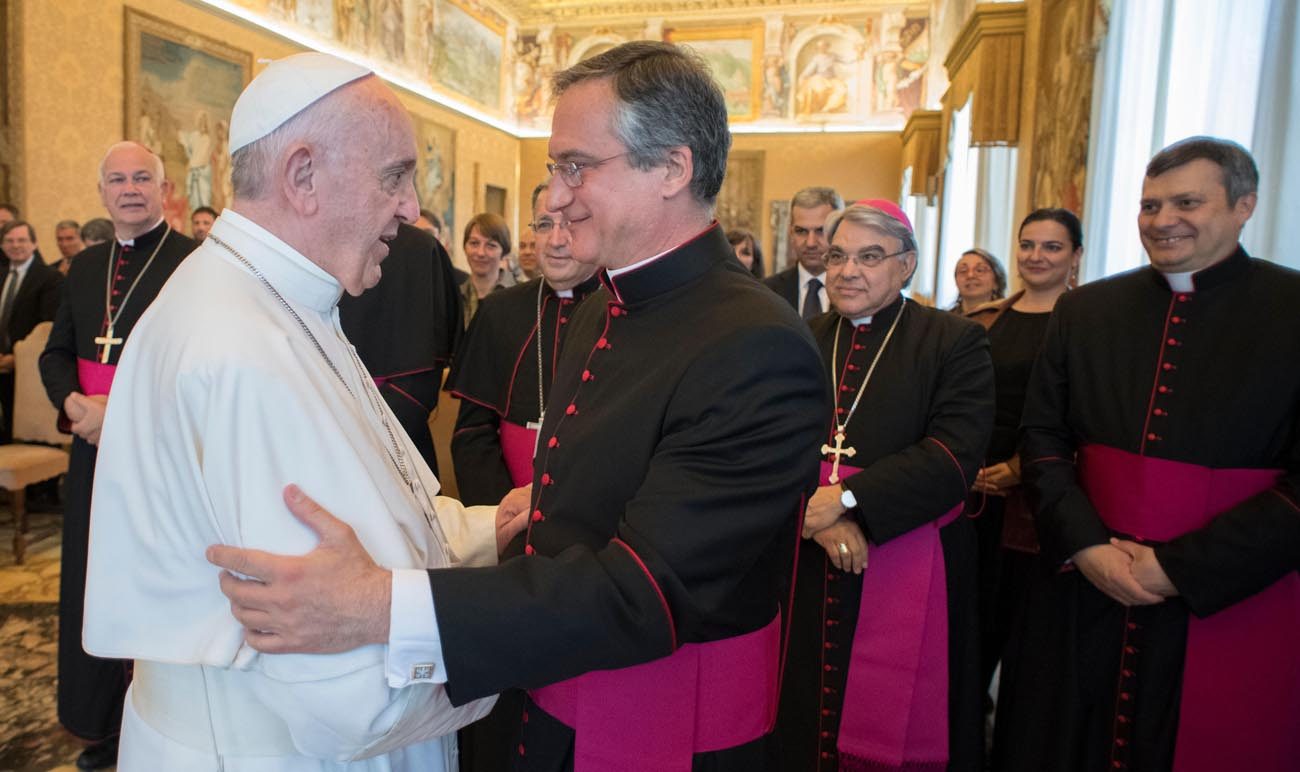 Pope Francis greets Msgr. Dario Vigano, director of the Vatican Secretariat for Communications, during a meeting with members of the secretariat at the Vatican May 4. Addressing the group responsible for reforming Vatican communications, the pope said that courageous teamwork is needed to best respond to new challenges. (CNS photo/L'Osservatore Romano)

VATICAN CITY (CNS) — To best respond to new challenges in the field of communication, the Vatican needs smart, courageous teamwork, not nostalgia for a glorious past or doomsday forecasts, Pope Francis said.

As the Vatican continues to integrate and coordinate its numerous media outlets under the Secretariat for Communication as part of a wider process of reform, the pope said “we must not be afraid of this word,” reform.

Reform is not brushing a bit of fresh paint on things, but “reform is giving another form to things, organizing them in another way,” he said May 4 in a speech to the secretariat’s members, directors and officials, who were holding their first plenary assembly since the pope instituted the body in 2015.

Reform, the pope added, must be done “with intelligence, meekness, but also, also, allow me (to use) the word, with a bit of ‘violence,’ but kind, good violence, in order to reform things,” he said in off-the-cuff remarks.

“Let’s not allow the temptation of clinging to a glorious past to prevail. Instead, let us make great team players in order to better respond to the new challenges in communications that today’s culture demands of us without fear and without imagining apocalyptic scenarios.”

The pope had created the secretariat to coordinate the work that had been done individually by the Pontifical Council for Social Communications, Vatican press office, Vatican Internet office, Vatican Radio, the Vatican television production studio and the Vatican newspaper, printing press, photograph service and publishing house. The statutes say the coordination was needed to unify the many Vatican communications and media operations for a more “coherent” effort in evangelization and to respond to the growth of digital media and “factors of convergence and interactivity” in social communications.

Pope Francis said in his speech that the reform wasn’t merely about coordinating disparate entities or merging old offices, but was about the “construction of a true and actual institution ‘ex novo,'” from scratch.

As of next year, he said, the Vatican newspaper, L’Osservatore Romano, will be part of the secretariat and will have to find a “new and different” way to reach a greater number of readers than it currently does in print format. Fewer than 10,000 copies of the daily edition, printed in Italian, are printed a day.

This will require a willingness to find “a new plan for production and distribution,” he said. “The work is great, the challenge is great, but it can be done, it must be done.”

Vatican Radio also will need to be “rethought according to new models” and updated with new technologies to meet the needs of today’s listeners. However, the pope emphasized efforts were being made to “rationalize” short-wave radio broadcasts for countries, like those in Africa, with little access to modern technology.

Valuable experience and accomplishments from the past must be an inspiration for a new future, not become a “museum” that is nice and interesting to look at, “but not able to supply strength and courage for continuing the journey,” Pope Francis said.

PREVIOUS: Evangelizers must ‘go and listen, not ‘go and proselytize,’ pope says

NEXT: Encounter in Egypt: Trip highlights one of pope’s key teachings