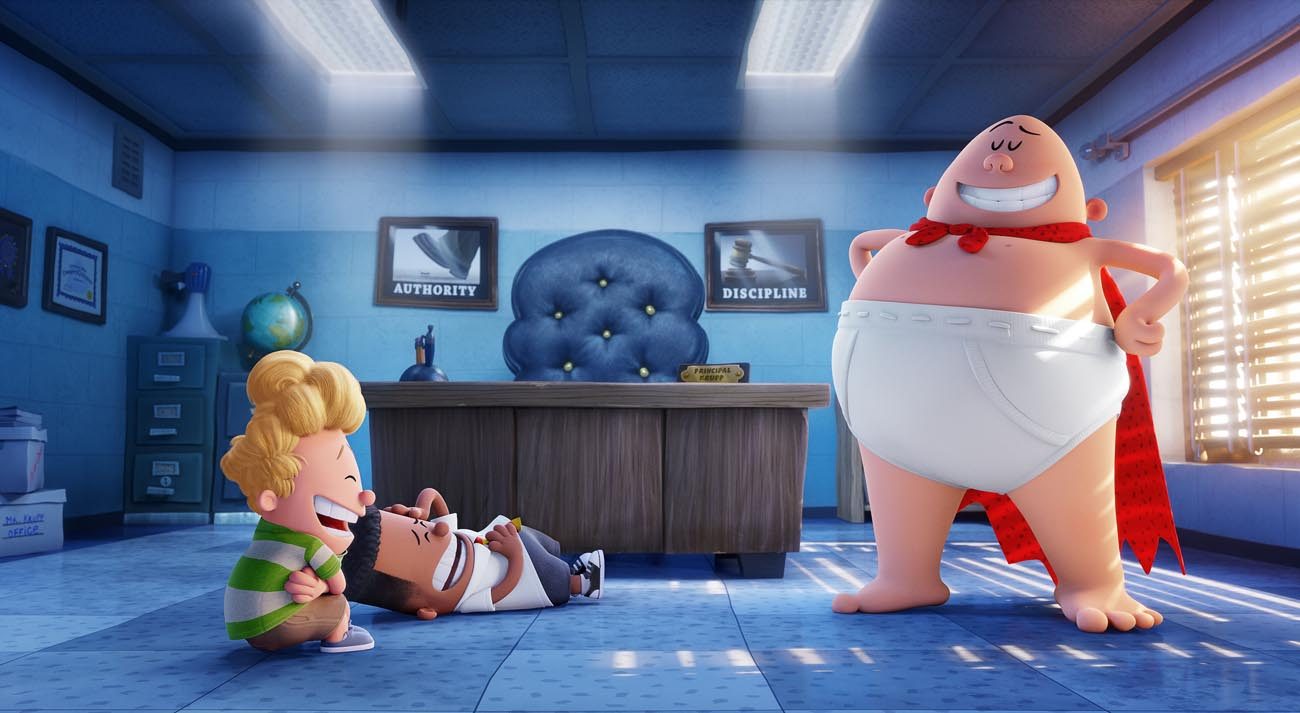 NEW YORK (CNS) — If you can say or even read the name of the planet Uranus without bursting into gales of giggles, then “Captain Underpants: The First Epic Movie” (Fox) may not be the film for you.

From a giant mechanized toilet running amok to an orchestra of whoopee cushions, this cheerfully silly kids’ cartoon displays an obsession with bodily functions that parents averse to potty humor will not appreciate.

On the upside, director David Soren’s comedy, adapted from a series of books by Dav Pilkey, is otherwise unobjectionable and briefly showcases some positive values and behavior.

Having long ago bonded over their shared appreciation of the astronomical pun referenced above, fourth-graders and best friends George Beard (voice of Kevin Hart) and Harold Hutchins (voice of Thomas Middleditch) have, over the years since, pulled off an extended spree of pranks at Jerome Horwitz Elementary School. These have drawn the ire of that institution’s strict leader, Principal Krupp (voice of Ed Helms), who now plans to separate the pals by assigning them to different classes.

Fearing that their camaraderie will be broken up if Krupp follows through on this threat, the boys improvise a solution. They hypnotize Krupp, and use mind control to convince him that he is Captain Underpants, the superhero featured in some of the many comic books they have written and drawn together up in their beloved treehouse. (George is the writer; Harold is the artist.)

In this character’s lightly attired guise — his uniform consists of tighty whities and a red cape — Krupp battles Professor Poopypants (voice of Nick Kroll), a wild-haired mad scientist posing as a science teacher at Horwitz. Bitterly resenting the mockery and joking his name inevitably provokes, the professor has come up with a scheme to employ technology to stamp out laughter, especially among kids.

Amid the flying toilet paper and embarrassing sound effects, the happy idiocies of Nicholas Stoller’s script really veer off course only once. In a montage of practical jokes, the lads are shown to have disguised a men’s room at school as a restroom for women. As a result, a lady walks in on Principal Krupp while he’s standing at a urinal. It’s a sight gag that seems better suited to a (bad) teen comedy than one aimed at tykes.

A brief spell of seriousness toward the end of the movie finds the central duo figuring out that some grownups may be mean because they’re lonely. They then do their best to remedy an instance of this problem by bringing together two adults who have previously been too shy to act on their mutual attraction.

It’s a nice wrap-up. But viewers young or old will have to run a gauntlet of relentless, though mild, grossness to reach it.

The film contains pervasive childish scatological humor. The Catholic News Service classification is A-II — adults and adolescents. The Motion Picture Association of America rating is PG — parental guidance suggested. Some material may not be suitable for children.

NEXT: Searching for a plot, ‘The Mummy’ lurches toward nowhere