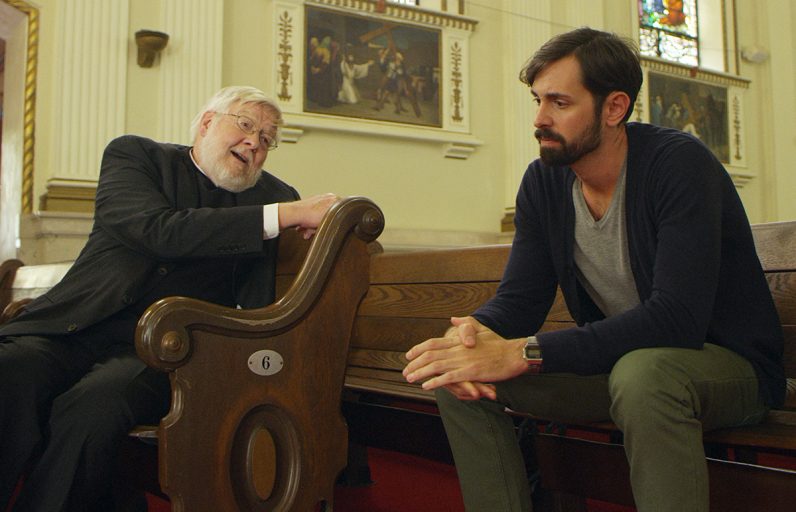 Tom Morton and Ryan Wesley Gilreath star in a scene from the movie “The Tribunal.” The Catholic News Service classification is A-III — adults. The Motion Picture Association of America rating is PG-13 — parents strongly cautioned. Some material may be inappropriate for children under 13. (CNS photo/107 Productions)

NEW YORK (CNS) — The annulment process provides the unusual courtroom setting for the romantic drama “The Tribunal” (Freestyle). While the movie’s Catholic values are strong, they come filtered through some faulty filmmaking.

Divorced musician Joe Seacker (Chris Petty) pursues a decree of nullity so that he can wed his devout girlfriend, Emily Vanderslice (Laura Mock). But his case requires the testimony of his estranged former bandmate and best friend, Tony Mirakul (Ryan Wesley Gilreath).

Tony was once Emily’s boyfriend, and still carries a torch for her while also harboring resentment against Joe for stepping into his shoes after he and Emily split. But Tony has firsthand knowledge of the fact that Joe’s ex, Jessie (Victoria McDevitt), disdained the permanence of marriage as well as the prospect of having kids.

Joe’s cause is represented by Emily’s father, Ben (Jim Damron), and opposed by the tribunals’ “defender of the bond,” Michael Constantino (Chuck Gillespie). Both men are permanent deacons.

Religious themes, including the countercultural message that sex before marriage is a damaging mistake as well as a sin — Tony’s seduction of Emily was the eventual cause of their breakup — will resonate with viewers of faith. But sometimes subpar acting, an amateurish musical score and unlikely plot developments chip away at this small-scale project’s credibility.

Still, the good intentions motivating screenwriter Michael C. Mergler and director Marc Leif are as obvious as they are honorable. And moviegoers used to being immersed in the loose morals of contemporary society will find the earnest ethics surrounding this love triangle a refreshing change.

In that light, at least some parents may consider “The Tribunal” acceptable for older teens, despite the elements listed below.

The film contains bedroom scenes, including a nongraphic premarital sexual encounter, some irreverent images, a mild oath and a few crass terms. The Catholic News Service classification is A-III — adults. The Motion Picture Association of America rating is PG-13 — parents strongly cautioned. Some material may be inappropriate for children under 13.