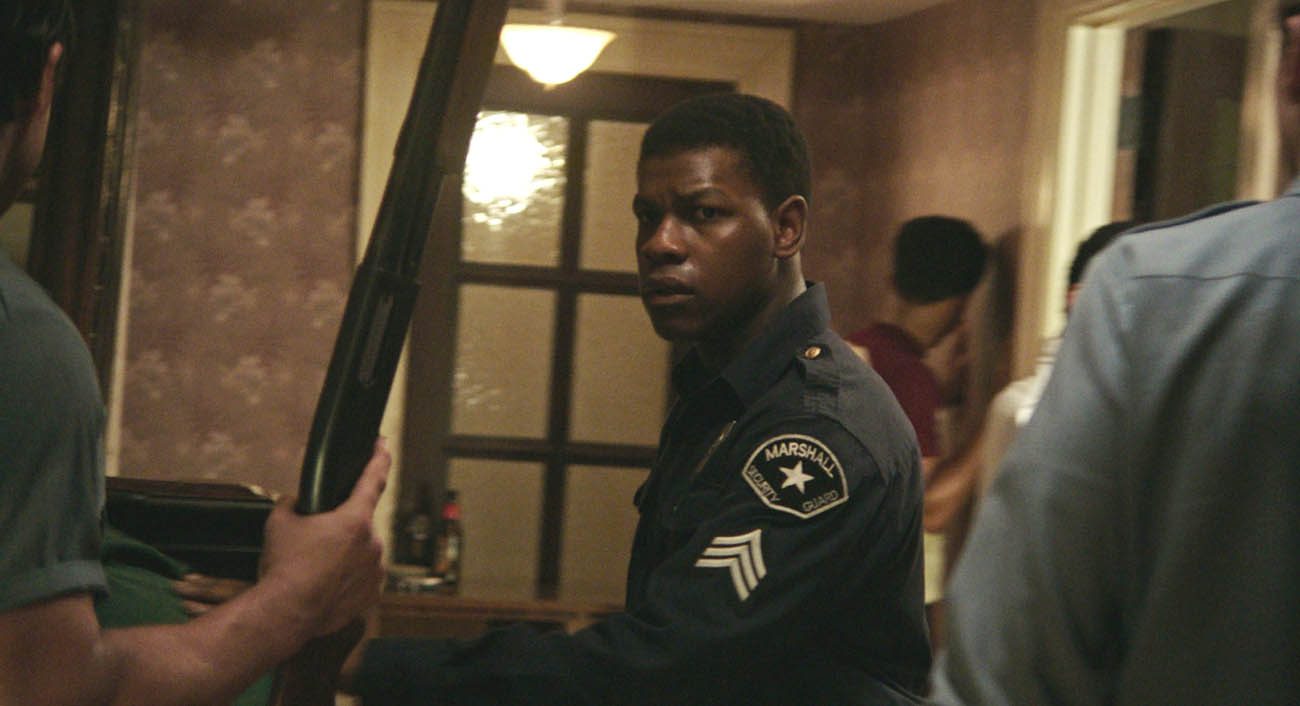 John Boyega stars in a scene from the movie "Detroit." (CNS photo/Annapurna Pictures)

NEW YORK (CNS) — A dark chapter of the Motor City’s history is revisited in “Detroit” (Annapurna), a searing period drama.

The setting is the summer of 1967, when race riots broke out in several cities across the country. In Detroit, simmering discontent over systemic discrimination and growing unemployment erupted in African-American neighborhoods. As protesters clashed with police, businesses were set afire and looting was widespread.

The crisis, which lasted four days, resulted in 43 dead, over 7,200 arrests, and the destruction of more than 2,000 buildings. “Detroit” zeroes in on one notorious incident of the so-called “12th Street Riot”: the police raid of the Algiers Motel that caused the death of three unarmed men and the brutal beating of several others.

As violence engulfed the city, the hotel became a refuge of sorts, harboring both innocent patrons and shady characters. Among the former are Larry Reed (Algee Smith) and Fred Temple (Jacob Latimore), members of an up-and-coming musical group, The Dramatics. Separated from their friends, they seek shelter at the Algiers.

At the hotel pool they meet two giggly prostitutes, Karen (Kaitlyn Dever) and Julie (Hannah Murray), white women from Ohio who are making the most of the “Summer of Love.”

Upstairs, 17-year-old Carl Cooper (Jason Mitchell) decides to show off by shooting blanks from a toy pistol. Turning his attention to the growing police presence outside, he next fires the gun into the crowd.

Suspecting a sniper, the police respond in droves, and a reign of terror descends on the Algiers and its residents, including Greene (Anthony Mackie), a decorated Vietnam vet.

The raid is led by a trigger-happy cop, Philip Krauss (Will Poulter), who has a reputation for shooting looters in the back. Krauss rounds up everyone and, with the assistance of fellow officer Flynn (Ben O’Toole), unleashes a ruthless, demeaning interrogation.

A witness to the unfolding horror is Melvin Dismukes (John Boyega), a black security guard charged with protecting a nearby grocery store from looters. Dismukes suspects wrongdoing, and inserts himself into the maelstrom at a key moment.

Needless to say, “Detroit” is not for the squeamish. Kathryn Bigelow (“Zero Dark Thirty”), working from a script by Mark Boal, directs at a furious, gut-wrenching pace, placing the viewer in the very center of the fast-moving storm and incorporating real-life news footage to enhance the immediacy.

However, though graphic, the portrayal of police brutality is never gratuitous. Coupled with the subsequent miscarriage of justice, the harrowing events re-enacted in “Detroit” offer a powerful reminder to mature viewers of a sad but significant incident in America’s past.

PREVIOUS: ‘A Ghost Story’ reflects on loss while suggesting purgatory

NEXT: Compelling study brings archaeology to life for academics, nonexperts