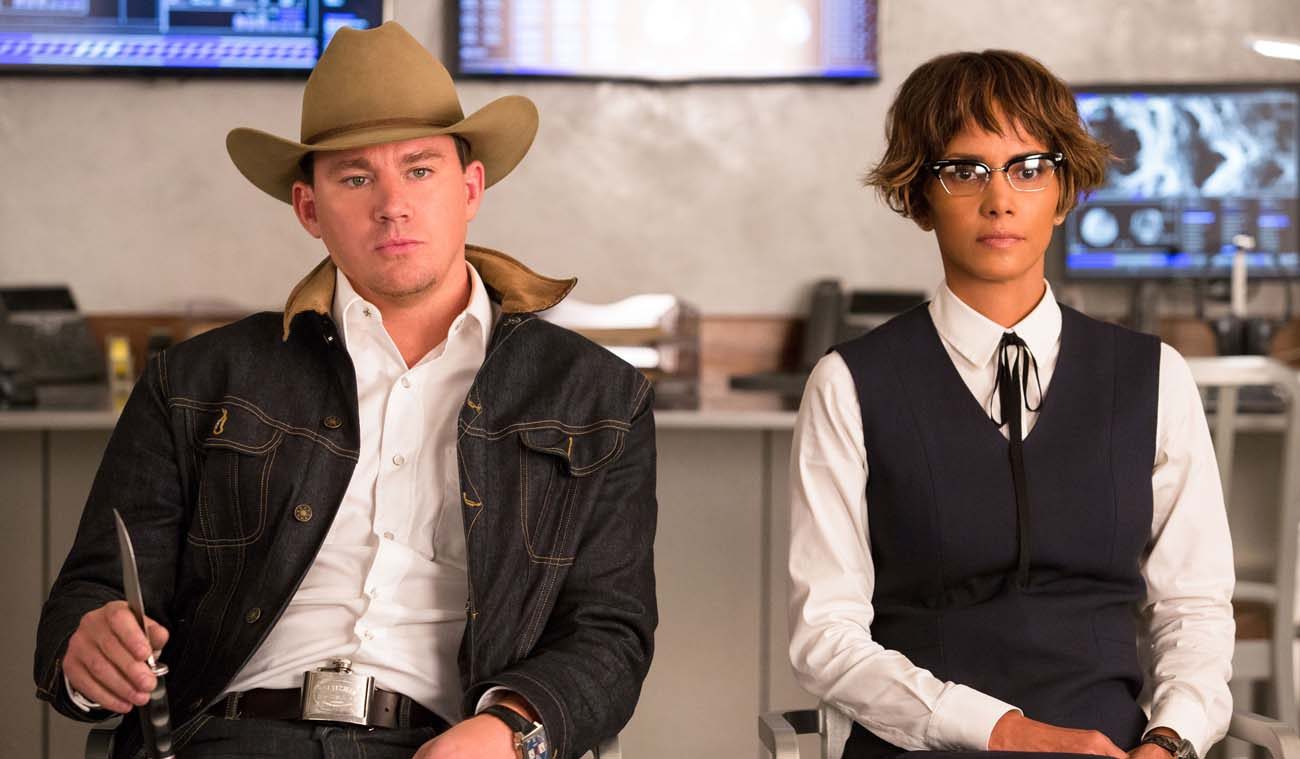 Channing Tatum and Halle Berry star in a scene from the movie "Kingsman: The Golden Circle." (CNS photo/Fox)

This leads to cartoonish but gruesome mayhem as well as a distasteful bedroom sequence that, together with other over-the-top elements, push the proceedings beyond the boundaries of acceptability.

In following up on his 2015 feature, “Kingsman: The Secret Service,” Vaughn and his returning script collaborator Jane Goldman once again focus on Gary “Eggsy” Unwin (Taron Egerton), the working-class London lad whose transformation into a skilled espionage operative was charted in the original.

Now an established agent of the independent Kingsman service, Eggsy takes on Poppy Adams (Julianne Moore), a psychopathic international drug trafficker intent on blackmailing the U.S. government into legalizing all narcotics. Early scenes find Eggsy and Merlin (Mark Strong), the group’s tech guru, staggered by Poppy’s murderous assault on their headquarters and on the homes of some of their colleagues.

Following an emergency protocol, the duo discovers the existence of the Kentucky-based American counterpart of their organization, and travels to bluegrass country seeking assistance.

Where the Kingsman, as viewers of the first movie will know, use the eponymous Saville Row tailor shop as a front their operation, their cousins across the water conceal themselves behind the Statesman whiskey distillery. And, just as Kingsman agents use figures from Arthurian legend for their codenames, Statesman spies, including their leader, Champagne (Jeff Bridges), get their monikers from a variety of beverages.

With Champagne’s aid, as well as that of his subordinates, Tequila (Channing Tatum), Ginger Ale (Halle Berry) and Whiskey (Pedro Pascal), Eggsy battles to bring down both Poppy and Charlie Hesketh (Edward Holcroft), a rejected Kingsman applicant who’s backing her.

Continuing to work from a comic book series by Matt Millar and Dave Gibbons, Vaughn edges Eggsy toward a more committed relationship with his live-in girlfriend, Tilde (Hanna Alstrom), a Swedish princess he rescued from peril in the first outing. And the screenplay dwells on Eggsy’s ties to his mentor, Harry Hart (Colin Firth), aka Agent Galahad.

Yet, to cite just one instance of the movie’s excesses, the audience watches as characters are fed into a meat grinder. There’s no helping that kind of hamburger.

NEXT: Translator’s expertise brings readers to new appreciation of Bible