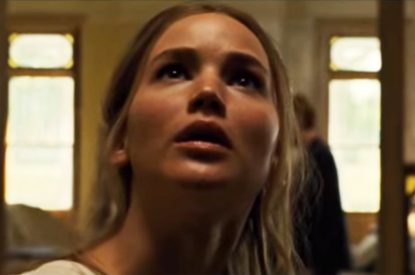 Jennifer Lawrence stars in a scene from “Mother!” in this still image from the official film trailer.

What’s all too apparent, however, is that the film’s treatment of religion — one of the major themes it seeks to address — is relentlessly negative and briefly sacrilegious.

One of the minor mysteries that receives no solution is why the movie’s title is officially left uncapitalized, in the e.e. cummings, k.d. lang manner, and what its exclamation point may signify. That’s symptomatic of writer-director Darren Aronofsky’s approach throughout, as he keeps viewers guessing not only about what’s going on, but about where it’s all happening as well.

This much, at least, the audience does know: When first encountered, the two unnamed main characters — a poet (Javier Bardem) and his wife (Jennifer Lawrence) — are living a solitary life in an isolated house in the countryside. Surrounded by a forest, their home is so remote, in fact, that it initially seems wholly removed from any world beyond it.

As she works to rehabilitate the dwelling after a disastrous fire, and he struggles with writer’s block, a series of intruders begin to arrive, led by a diffident doctor (Ed Harris) and his aggressive spouse (Michelle Pfeiffer). Ironically, the physician is a compulsive smoker with a constant hack that doesn’t bode well for his future (we later learn that he is, indeed, dying).

While their own presence still remains unaccounted for, the visiting couple is tracked down by their quarreling sons (real-life brothers Domhnall and Brian Gleeson) who barge in and proceed to enact a tragedy directly paralleling the biblical story of Cain and Abel. This is perhaps the first hint that Bardem’s persona also has a scriptural counterpart — none other than God the Father.

As the trickle of strangers grows into a flood — overcoming his drought of inspiration, the writer has penned a work that draws instant and clamorous acclaim — their unwilling hostess is understandably distressed by their bizarre behavior, not least the casual way they take her hospitality for granted. Yet her husband extends a mysteriously motivated, endlessly patient welcome to one and all.

Amid the confusion, Aronofsky — who incorporates Gothic and horror elements into the story — touches on a broad range of topics including creativity, compassion and marital relationships. As he continues to delve into his principal subject, faith, however, “Mother!” becomes repugnant.

The author’s celebrated work is clearly meant as a stand-in for the Bible. But those on the receiving end of his revelation misunderstand and misuse it.

After a pregnancy troubled by the disorder surrounding her, moreover, Lawrence’s title character gives birth to a son whose fate recalls the death of Jesus. In depicting his version of the Passion and the Eucharist, though, Aronofsky grotesquely caricatures both.

Viewers who shun “Mother!” on that basis will also be sparing themselves a two-hour ordeal and quite a bit of head-scratching.

PREVIOUS: You get one guess about the topic of ‘American Assassin’

NEXT: ‘Kingsman: The Golden Circle’ spoils the fun it’s trying to make