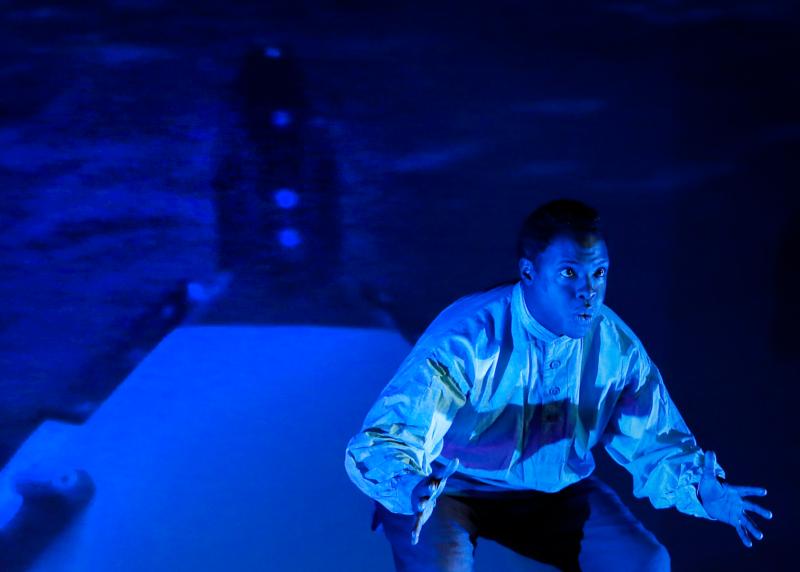 CHICAGO (CNS) — The life of Father Augustus Tolton already reads like a novel and now it is immortalized on stage with the new play “Tolton: From Slave to Priest,” produced by St. Luke Productions from Battle Ground, Washington.

Tolton, a former slave, is the first recognized American diocesan priest of African descent. The Archdiocese of Chicago opened his cause for sainthood in 2011, giving him the title “servant of God.”

Born into slavery, he fled with his mother and siblings through the woods of northern Missouri and across the Mississippi River while being pursued by soldiers when he was only 9 years old. The small family made their home in Quincy, Illinois, a sanctuary for runaway slaves.

The boy’s father had died earlier in St. Louis, after escaping slavery to serve in the Union Army.

Growing up in Quincy and serving at Mass, young Augustus felt a call to the priesthood, but, because of rampant racism, no seminary in the United States would accept him. He headed to Rome, convinced he would become a missionary priest serving in Africa. However, after ordination, he was sent back to his hometown to be a missionary to the community there, again facing rampant racism.

He was such a good preacher that many white Catholics joined his black parishioners in the pews for his Masses. This upset white priests in the town, so Father Tolton headed north to Chicago, at the request of Archbishop Patrick Feehan, to minister to the black Catholic community here.

Father Tolton worked to the point of exhaustion for his congregation in Chicago, and on July 9, 1897, he died of heatstroke while returning from a priests’ retreat. He was 43.

His journey is now crystallized in a 90-minute, one-person play that premiered Nov. 5 at Chicago’s DuSable Museum of African American History. For over 30 years, St. Luke Productions has produced other plays about holy men and women, including St. Faustina, St. Maximilian Kolbe and St. John Vianney.

Leonardo Defilippis, president and founder of St. Luke Productions, first learned of Father Tolton from a priest in the Diocese of Springfield, which includes the town of Quincy where the priest served and is buried.

Defilippis researched Father Tolton’s life and hung a photo of him in his office. When deciding which play he would produce next, he noticed the photo again and started praying to Father Tolton. Defilippis said he felt the Holy Spirit was asking him to make a play of the priest’s life.

Once decided, the producer reached out to Cardinal Francis E. George, who as Chicago’s archbishop at the time had opened Father Tolton’s cause for canonization during the Year of the Priest. The cardinal directed him to Chicago Auxiliary Bishop Joseph N. Perry, postulator of Father Tolton’s cause. Defilippis said he and his team worked closely with Bishop Perry on the play.

“It’s exciting to do something in complete conjunction with the canonization process. It’s a tool that can be used for this,” he told the Chicago Catholic, the archdiocesan newspaper. “It’s one of the most unique shows right now in theater because it’s a multimedia show, which means you have characters on a screen that are interacting with a live actor.”

Defilippis has created a “very unique art form” that makes it easy for groups anywhere to host the play because of the simple setup.

When writing the script, Defilippis, who co-wrote the play with his wife, pulled from themes in Father Tolton’s life — perseverance, trust in God, incredible forgiveness and his priesthood.

Defilippis believes the time Father Tolton spent studying for the priesthood in Rome opened him up to the universality of a priest’s ministry. He studied with men from all over the world and saw the church’s history in places like the catacombs, the Coliseum and St. Peter’s Basilica.

The play doesn’t shy away from the harsh realities Father Tolton faced, such as severe prejudice against him from fellow priests in Quincy. The post-Reconstruction period was a troubled time for the United States, and tensions and violence were real. Father Tolton himself often spoke of being watched.

Defilippis believes that telling Father Tolton’s story through art is a way to bring light into today’s seemingly dark world.

“The highest form of art is when you not only entertain and inspire, but bring it to another level, of what we call evangelization of what actually touches hearts in a deep and impactful way that actually changes lives,” he said. “That’s what we’ve seen with these plays.”

NEXT: The Christmas story as told by the animals in the manger