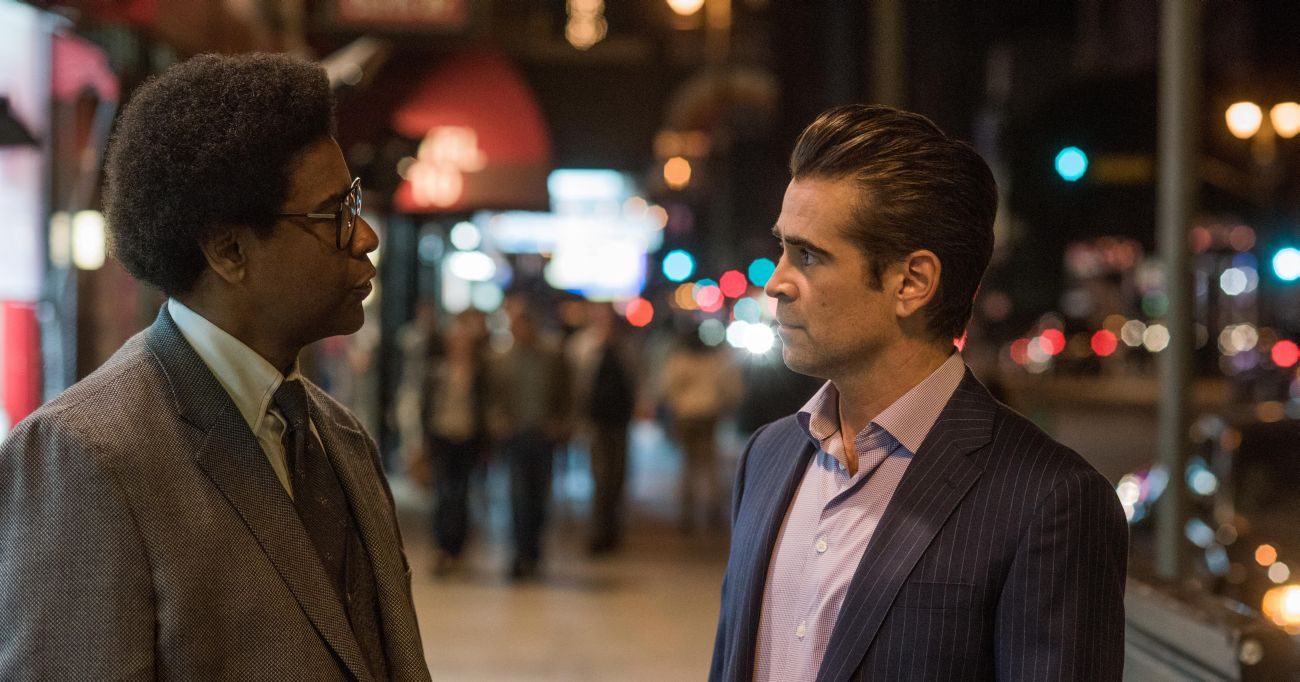 Denzel Washington and Colin Farrell star in star in a scene from the movie "Roman J. Israel, Esq." (CNS photo/Sony)

Though the film takes left-wing values for granted, even conservatives may recognize its appeal, much of which derives from an intense performance by Denzel Washington in the title role.

Roman is a disheveled, eccentric civil rights lawyer in Los Angeles who toils behind the scenes so that his legendary senior partner and mentor, William Henry Jackson, can perform successfully in the courtroom. As the movie starts off, Jackson — whom the audience never sees — is stricken by a critical illness from which he is unlikely to recover.

Roman tries to take over Jackson’s case load. But his uncompromising attitude soon has him at odds with prosecutors and judges alike — he’s cited for contempt in one of his first appearances.

Jackson’s niece, Lynn (Amanda Warren), soon makes it clear that the end has come for the unprofitable partnership. Successful high-end attorney George Pierce (Colin Farrell), a former student of Jackson’s whom Roman regards as a sellout, is brought into to supervise its dissolution.

Desperate for a job, Roman turns to social activist Maya Alston (Carmen Ejogo). But the organization whose local office she heads is not hiring. Instead, Roman is forced to consider going mainstream when George offers him a position in his downtown firm.

Though Gilroy’s dialogue sometimes lapses into political rhetoric, the moral shadings of the two main characters keep the proceedings from becoming dull. George is not the uncaring shyster he at first appears, while Roman turns out to be capable, under pressure, of a serious moral lapse. Once committed, his misdeed and its consequences drive the plot forward toward and keep tension high.

Roman and Maya develop a quasi-romantic friendship but one so discreet it never goes beyond the kissing stage. And the minimal violence in the movie is heard but not seen.

Accordingly, parents may wish to consider whether the ethical resonances of this serious-minded picture outweigh the swearing that sometimes crops up in the script — most often, unfortunately, in the form of the Lord’s name being taken in vain — making it acceptable for older teens.

The film contains fleeting off-screen violence, several uses of profanity and a milder oath, a single rough term and occasional crude and crass language. The Catholic News Service classification is A-III — adults. The Motion Picture Association of America rating is PG-13 — parents strongly cautioned. Some material may be inappropriate for children under 13.

PREVIOUS: Sermon on the screen: Priest plays himself in ‘Lady Bird’

NEXT: Must-read book details ongoing genocide in birthplace of Christianity