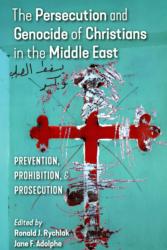 This remarkable book should be read by all Catholics, indeed all Christians who care about the fate of Christianity in the lands of its origin, the Middle East and North Africa. Christianity predates Islam in these places by some seven centuries and the Bible, the Hebrew Scriptures and the New Testament form the basis of Islam’s most holy book, the Quran.

Yet the followers of the Islamic State group, and related groups such as al-Qaida, also want to destroy all Jews and the state of Israel, about half of the population of which are refugees or descendants of refugees from Muslim lands. In this, IS, which this book carefully distinguishes from Islam as it is understood and practiced by the vast majority of Muslims in the world, is seeking to destroy the very roots and basis of Islam itself. It wants, in effect, to destroy any other understanding of Islam than its own.

This book goes into the history and theology of Muslim-Christian relations over the centuries. It looks at the various resources that are available under international law and how the Vatican has appealed to both the legal structures of international law and to the natural law of reason and our common humanity to help people understand what is happening and how this ongoing persecution and genocide of Christians may be addressed and stopped.

It describes well what Muslim Shariah law is and how it could be used to oppose the violence of the IS group that perverts and misinterprets the traditions of Shariah.

An essay by Jane Adolphe, the book’s co-editor, describes in horrifying detail how sexual violence against women and children is used by IS and al-Qaida as a tactic of terror to intimidate husbands and fathers and force them to submit to the tyranny they wish to establish.

Photos taken from 2015 through the spring of 2017 show the desecration of Christian communities, churches and sacred art by IS and its followers throughout the Middle East and North Africa. The cover illustration shows a defaced cross with an Arabic text written over it that reads: “Let the cross fall and break.”

Helpfully, the book describes the origin of the word “genocide,” which was coined in 1944 by a Jewish lawyer to describe the Holocaust of the Jews by the Nazis in World War II and used as a precise legal concept in the Nuremberg trials of Nazi war criminals by the victorious Allies after the war.

Pope Francis, the book notes, has denounced the large-scale violence against Christians as “genocide,” so its use has both legal and moral justification.

The book contains the papers presented as a conference held at the Ave Maria University School of Law and concludes with an essay summarizing the results of a similar conference, “Under Caesar’s Sword,” sponsored by the University of Notre Dame and Georgetown University. Christians of all traditions need to work together now.